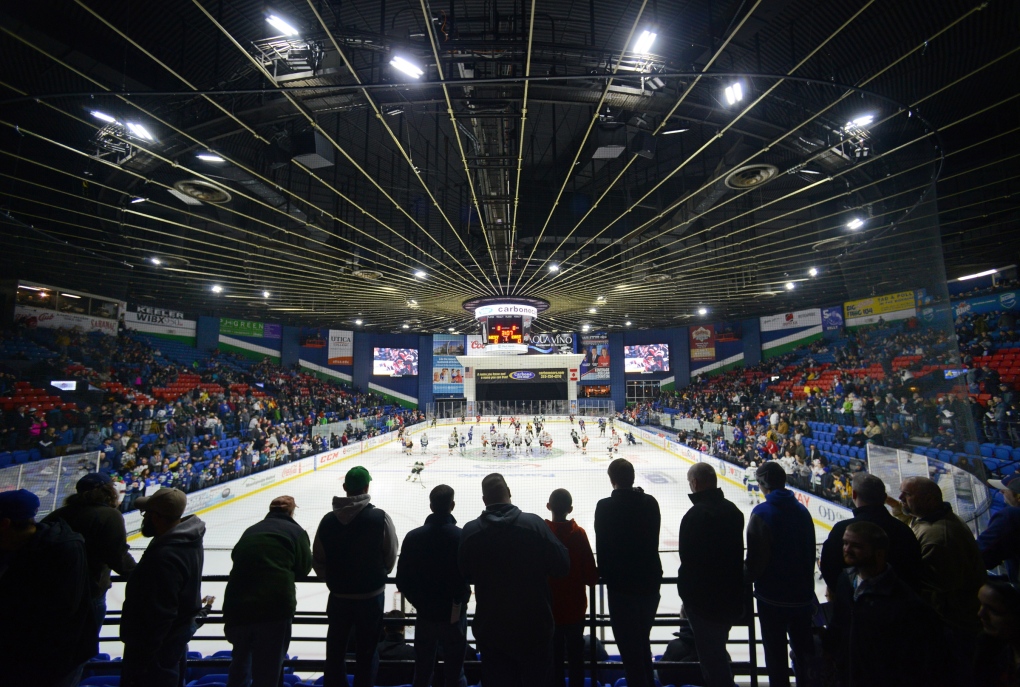 Hockey fans line up along the walkways in the Utica Memorial Auditorium to attend the AHL 2015 All Star Skills Competition on Jan. 25, 2015, in Utica, N.Y. (Observer-Dispatch / Mark DiOrio / AP PHoto)

The American Hockey League did the expected Monday, cancelling the remainder of its season and playoffs because of the COVID-19 pandemic.

The AHL made the announcement following a vote by its board of governors.

"After a lengthy review process, the American Hockey League has determined that the resumption and completion of the 2019-20 season is not feasible in light of current conditions," Andrews said in a statement.

The AHL paused its schedule March 12, following the NHL's lead in the aftermath of an NBA player testing positive for COVID-19.

Andrews said last month the league was "pivoting" to the 2020-21 campaign, while adding nothing was official regarding the status of 2019-20.

The NHL still hopes to salvage its season in some form this summer, but the AHL saw no path forward.

"We are very grateful to the National Hockey League and its teams for their support and leadership in navigating through the challenges faced over the last two months," Andrews said.

The AHL is made up of 31 franchises either owned by or affiliated with NHL clubs.

There are four teams based in Canada -- the Laval Rocket, Belleville Senators, Toronto Marlies and Manitoba Moose.

In operation since 1936, the AHL's website states that 90 per cent of current NHLers are graduates, and that more than 100 members of the Hockey Hall of Fame spent time on the circuit.

Ottawa Senators general manager Pierre Dorion said last month the prospect of the AHL cancelling its season and playoffs -- denying some of the franchise's young talent valuable experience -- would be a blow to his club's rebuild efforts at the NHL level.

"It's probably the thing that hurts us the most as an organization (during the pandemic)," Dorion said.

The AHL current standings -- sorted by points percentage -- and statistics as of March 12, are considered final and official, and will serve as the basis for determining league awards for the 2019-20 season.

The Canadian Hockey League previously cancelled the rest of the junior season, playoffs and the Memorial Cup amid the novel coronavirus outbreak.

Most leagues in Europe nixed the remainder of their regular schedules and playoffs earlier this spring, while a number of international tournaments, including the men's and women's world championships, were also cancelled.

Andrews, meanwhile, is set to retire after 26 seasons leading the AHL on July 1, with former NHL executive Scott Howson taking over as both president and CEO.

This report by The Canadian Press was first published May 11, 2020.

PM Trudeau: One jurisdiction's misstep could see COVID-19 efforts 'go up in smoke'

What life is like in Nunavut, the only coronavirus-free place in Canada

Business is booming for these companies during the COVID-19 pandemic

Pattie Lovett-Reid: Is it time to invest in the markets during the coronavirus pandemic?

'Please respect distancing': Paris pedestrian sends a message on the back of her hat