A bill introduced to the national assembly Wednesday would equip every Quebec classroom with an air purifier and sensor that monitors carbon dioxide levels, impose new maximum CO2 concentrations, and make CO2 data available to the public.

Higher levels of CO2 concentrations suggest air isn’t circulating properly indoors, signifying a higher potential for the spread of COVID-19. While the province considers 1,000 parts per million (ppm) to be an ideal target, data presented by the ministry last week suggests 724 classrooms have a weekly average CO2 concentration that exceeds 1,500 parts per million (ppm), while 72 classrooms exceed 2,000 ppm.

Quebec Liberal MNA Marwah Rizqy tabled Bill 192, An Act to ensure student health and safety in the classroom by regulating ambient air quality in schools, with hopes that the national assembly will move quickly to pass it.

“We can work on this bill right now,” Rizqy told reporters in Quebec City.

“The (Parti Quebecois) makes a big deal about King Charles, and now we are able to table a bill within a few days,” she said in reference to Bill 4, which aims to make the King's oath optional and allow PQ members to sit without swearing allegiance to the British monarchy.

Time is of the essence, as it was highlighted earlier this month by Quebec Education Minister Bernard Drainville that carbon dioxide concentrations are likely to rise as the weather gets colder and schools close their windows. 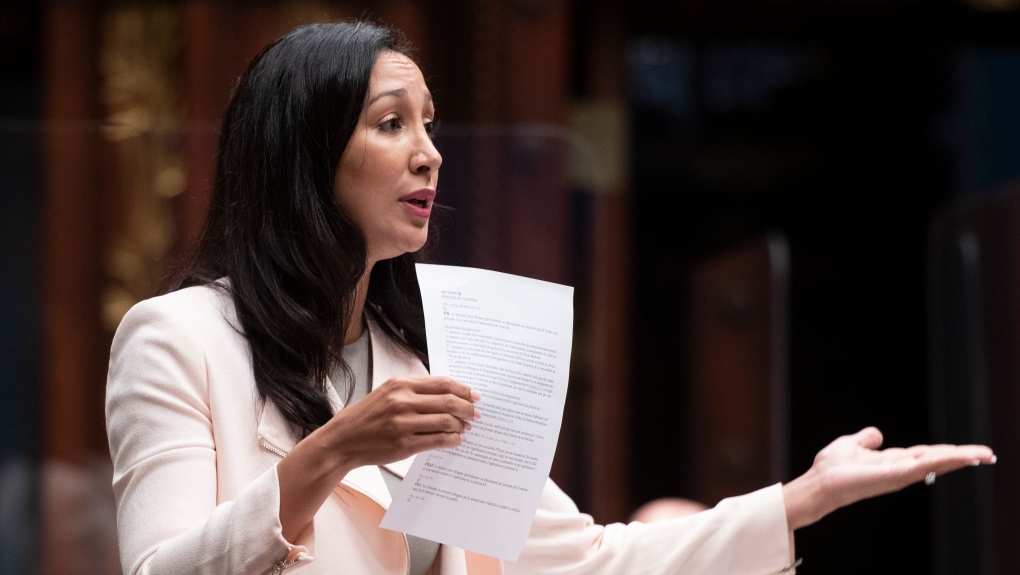 Under Rizqy’s bill, the 1,000 ppm target would become the legal limit. Schools would be compelled to provide weekly reports to the ministry, which would then be made public.

The proposed limit is even tighter during pandemic times, restricting the acceptable limit to 800 ppm until the WHO says the health crisis is over.

"The particles, they are in the air and they remain in the air for 12 to 48 hours," said Nancy Delgrave, scientific coordinator of the COVID-STOP group, who appeared with Rizqy during Wednesday's press conference.

"To reduce the contagion of respiratory viruses, and also to reduce their severity, it is important to treat the air," she said.

A VOW FROM THE FORMER MINISTER

At the time, the minister released a letter to directors general outlining his plans to require the readers in libraries, gymnasiums, daycare rooms and other spaces.

CTV News has reached out to the ministry for a status update on the rollout of the devices.

"Laying down a bill at this point is redundant, I believe," said Quebec Provincial Association of Teachers President Heidi Yetman.

She told CTV she would rather the province prioritize classroom repairs.

Bill 192: An Act to ensure student health and safety in the classroom by regulating ambient air quality in... by Ctv Montreal on Scribd

Health Canada is reviewing the safety of domperidone amid reports that some breastfeeding mothers in Canada and the U.S. have had serious psychiatric symptoms when they tried to stop taking the drug.