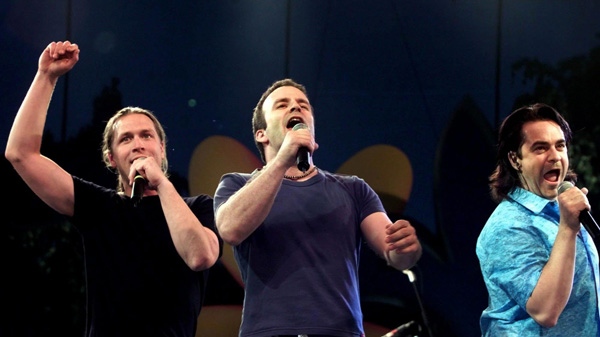 Singer Kevin Parent is seen with Marc Dery and Sylvain Cossette as they open up the show for the St-Jean-Baptiste celebrations in Quebec City, Friday, June 23, 2000. (Jacques Boissinot / THE CANADIAN PRESS)

MONTREAL -- The agency that represented Kevin Parent is severing ties with the Quebec singer-songwriter, who has found himself in the wave of sexual misconduct allegations currently hitting Quebec.

The Agence Preste decision to end all collaboration with him was announced on Facebook Monday.

“The values of respect and tolerance are in Preste's DNA and are non-negotiable. We unreservedly condemn anyone who departs from it in any form whatsoever,” the agency wrote.

Parent responded to the allegations Monday morning by posting a video on his Facebook page.

“I feel that there is a wave of cries for justice, and I cannot help but support this movement. I made a lot of mistakes in my life and I said a lot of nonsense. I take responsibility for them,” he said. “There is a big tidal wave of awareness and cries for justice... It goes beyond me and my opinion and the desire to defend myself or something like that. This is not what I want to do. I want to listen, understand and be there.

“And for my delinquencies, my misconduct and all that you want to name one after the other, it is important that the context comes out... There is no context, it's a little ‘free for all’ as they say, but I assume and I know it's going to be a ‘rough’ trip for me the next few times, but I hope it will be useful for something.”

The singer said he sincerely apologizes and that he will “pay his debts in due course, when we tell him how.”

Parent’s name is added to the list of several Quebec personalities who have seen their business and creative partners distance themselves following allegations made on social media.

Host Maripier Morin lost her sponsporship with BonLook eyewear and the Blush lingerie line, in addition to seeing Bell Media withdraw the series featuring her on the Vrak, Z and Crave platforms.

The singer Yann Perreau was dropped by the record company Bonsound and the agency Hotel Particulier, while Maybe Watson was shown the door by Alaclair Ensemble, the Quebec rap group of which he was one of the founding members. The Dare To Care label cut ties with singer Bernard Adamus, before being expelled in turn by ADISQ due to charges against its president Eli Bissonnette.

The video game giant Ubisoft also announced the departure of three senior executives, including the head of its Canadian studios, Yannis Mallat.