After man's death, Quebec premier says no to curfew exception, claiming others would pose as homeless

MONTREAL -- Two days after a homeless man died outside in Montreal, possibly while hiding from police during Quebec's nightly COVID-19 curfew, the city's mayor called on on the province to exempt the homeless from the curfew.

But Quebec Premier François Legault said no, responding that if the homeless get an exception, other Quebecers might pretend they're homeless when stopped by police after 8 p.m.

"I was told that if we change the decree, there's a risk that people would use this excuse as a way to walk around in the streets after 8 p.m.," Legault said.

He said he doesn't want to risk this because "we see the curfew seems to be bearing fruit."

Montreal Mayor Valérie Plante said earlier Tuesday that applying the curfew to the homeless "creates too much stress right now for people in difficulty."

Raphael Andre, 51, was found frozen on Sunday morning inside a porta-potty near a shelter on Parc Ave. where he'd been keeping warm during the day. The Quebec coroner's office is investigating his death.

Plante said she was "shocked" by the death. She said there are many different problems that contributed, and solutions that are needed.

But first of all, she wants the province to exempt the homeless from the current 8 p.m. curfew and the minimum $1,000 fine for being outside after that time each night.

When asked if she believed Andre had been hiding from police when he died, Plante said there's no way to know.

But for all homeless people, "What I want them to hear is 'don't be afraid,'" she said.

"It's very possible that there are homeless people who could be afraid of the police."

She said that after a series of stresses for the homeless, and also for those who work with them, the curfew is just too much to handle.

"People are exhausted, to be honest," she said. "The curfew just adds to that and creates a sense of insecurity for a lot of [people]."

That "is not what I want for Montreal. I want people to feel safe in the street," she said.

LEGAULT: POLICE ARE NOT REALLY ASKED TO FINE THE HOMELESS

Legault was asked several times at his own press conference, later in the day, about his response to Plante.

While he said that an official rule change is not on the table, he also said that police are supposed to approach curfew fines delicately, and he believes they're doing so.

"Up until now, they have managed the situation quite well. They are not there to give fines to the homeless -- they are there to direct them to the shelters."

However, one front-line worker in Montreal told CTV News this weekend that she knows some homeless women have been ticketed.

Plante also made a point in her remarks of praising the police's attempts to be sensitive. She said that it was important for the province to make an official exemption because otherwise it falls on officers to make judgment calls, a difficult position for them.

"It's not an easy situation for them either... because the police are following the law," she said.

But Legault criticized Plante for, he said, calling the police's actions into question. "I don't know why Mrs. Plante does not have confidence in the SPVM," he said.

Plante said another announcement is also coming about yet another shelter space, with 100 beds, in Montreal. But she slammed the province for what she called a lack of investment in affordable housing.

She said homelessness is growing in the city right now and that much of the blame falls on the province, because housing falls within its purview.

She also said that since the curfew rule and many of the health decisions lie with the province, it's "too simple" to blame the city for the current problems or for Andre's death.

Even as temperatures drop and the question of housing becomes more urgent, the COVID-19 outbreaks among the homeless, which closed some of the smaller shelters, remain pressing as well.

“There have been multiple cases and some shelters that... have had a fairly high positivity rate when testing occurred, so that’s been something that is concerning," said Sam Watts, the CEO of Welcome Hall Mission, which is overseeing not just its own shelter but several of the new, temporary COVID-19 shelter spaces.

It's especially troubling, he said, "because if the virus begins to move in the homeless population, this is a population that often has other medical comorbidities, and so they’re very vulnerable to health problems already."

The city announced last week it would move up the homeless in the vaccine priority list and vaccinate 2,000 people in the group.

On Tuesday, a group of 200 homeless people and 40 staff began vaccinations in the Old Port after signing consent slips. 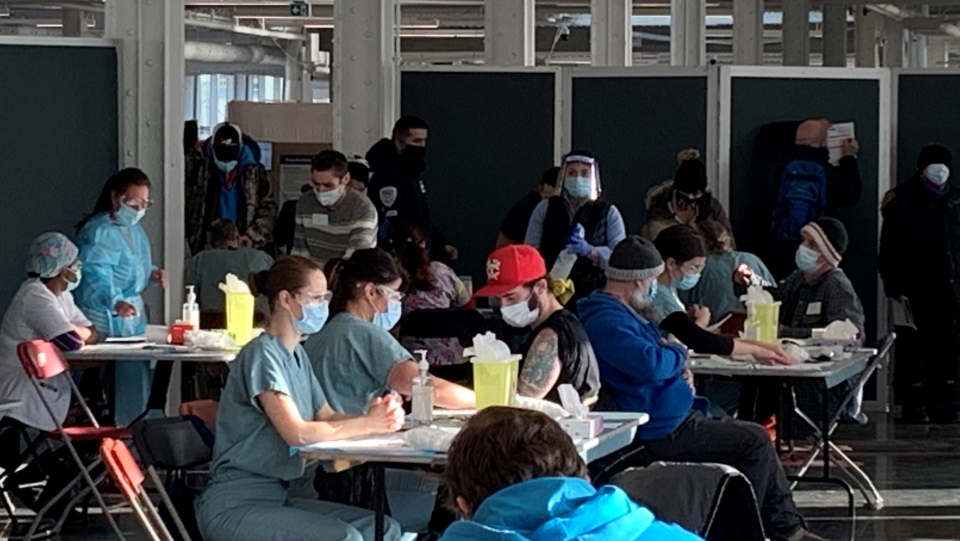 Some of those eligible for the vaccines are front-line workers in homeless shelters.

"Like in the health sector, where we’re prioritizing health workers because they’re coming in contact with people every day who may have the virus, likewise, our staff have to be prioritized for the vaccine, so they are safer," she said.