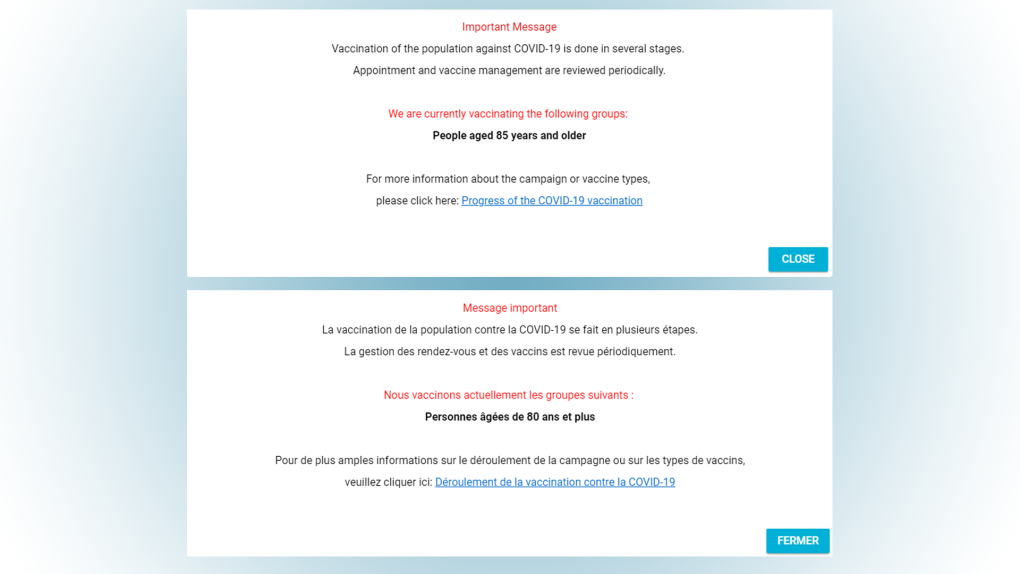 MONTREAL -- English-speaking Quebecers trying to get their COVID-19 vaccine were frustrated this week when they found that the English and French versions of Clic Santé, the province’s vaccine booking portal, had different requirements to get a shot.

In the first days of mass vaccinations in Quebec, the minimum age has been reduced more than once to allow younger people to get a dose.

With online appointments being made exclusively through Clic Santé, public health has asked people to be patient as it irons out the kinks in the brand-new software.

One of those kinks seems to be a delay in updates between the French and English versions of the website.

Catherine Ann ran into problems Tuesday night while trying to make an appointment for her 80-year-old brother.

In Saint-Hubert, where her brother lives, the minimum age to get jabbed is 80, but you might not know that if you were using the English version of the site, which says the minimum age is 85.

“So, I thought, OK, maybe they're vaccinating 85 plus but you can make an appointment for 80 plus,” she said.

“So then I said, ‘You know what, let me just try the French page’… I put his postal code and the desktop. It pops up that they’re vaccinating 80 plus,” she said.

“And [that same question came up, but it said] ‘are you 80 or over’, I click 'Yes', then it opens up the calendar to make an appointment.” 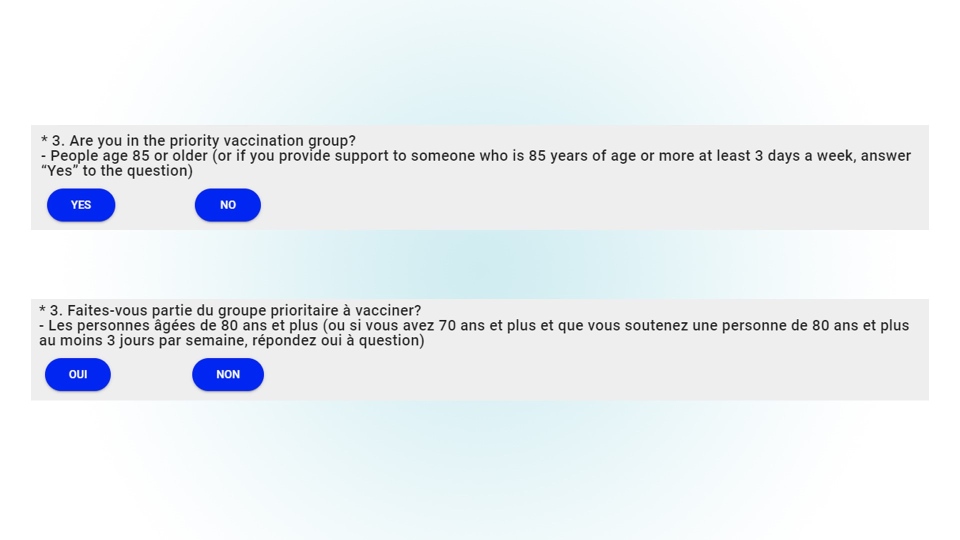 She says she’s nervous that other seniors, many of whom may not be comfortable using a computer, won’t know they’re eligible to get a vaccine.

“This is just a huge slap in the face to the anglophone community,” said another woman, who asked to remain anonymous.

She says she was trying to book an appointment for her father on the South Shore, but couldn’t get through because of the language issue.

Since her laptop is set to English automatically, she says she wasn’t able to book an appointment.

“Last night I checked on my cell phone, which went to the French site and I didn't bother to change it. When I got to the point where we can book it said 80 and over,” she said.

“I was very angry, very frustrated. Why are francophone seniors entitled to [know about] it and my father isn't?”

Ann told CTV News she was able to book a slot next week for her brother in the end. The second woman said her father is still working to get an appointment.

Quebec public health said in a statement Wendesday afternoon, that "it has just noted the situation" CTV News brought to its attention.

"We will correct the situation quickly," a spokesperson said in an email.

Last week, Health Minister Christian Dubé said he had heard reports of people having problems making appointments. He said the province is working to resolve those issues.

People can sign up to receive the vaccine when it’s their turn by visiting the Quebec COVID-19 vaccination campaign website or by calling 1-877-644-4545.