Although memories of war are there to stay for most Ukrainian children, some refugees in Montreal have a chance to relive their happy childhood by visiting the zoo or waterpark.

Dmitri Tcherkasski and his daughter Anna, both originally from Moscow, are organizing weekly excursions for Ukrainian children and mothers to distract them from their recent war experience.

Tcherkasski said his family aims to provide Ukrainian children with "a proper childhood they deserve" after witnessing the Russian invasion first-hand.

"When I first met these kids and moms and looked into their eyes, I saw emptiness," he said. "Without money, without language, with the heavy burden of death or worries about relatives — starting from scratch like that is a huge amount of stress."

Hanna Kovalenko, who escaped the city of Mariupol with her two daughters under constant shelling, said her children were fully distracted from what they witnessed in the warzone during their zoo trip.

"The girls loved it, everything was so well organized," she said. "We even received gifts at the end of the excursion, so Dmitri does everything to help us. We look forward to more of these trips."

Tcherkasski has completed two day trips to the Granby Zoo and another one to the Village du Père Noël waterpark, each about an hour from Montreal. The trips were made on a family-owned bus with a capacity of 40 people.

The Russian family spends about $2,500 per trip, relying solely on their own funds and occasional donations from their Santa's Bus website.

On July 31, Santa's Bus ventured off to Parc Safari to give children a chance to see elephants, deer, and buffalo in person and to enjoy summer weather at the waterpark on site.

The bus departed around 8:00 a.m. Sunday from the Terrasse Royale Hotel, located in Montreal's Côte-des-Neiges borough. 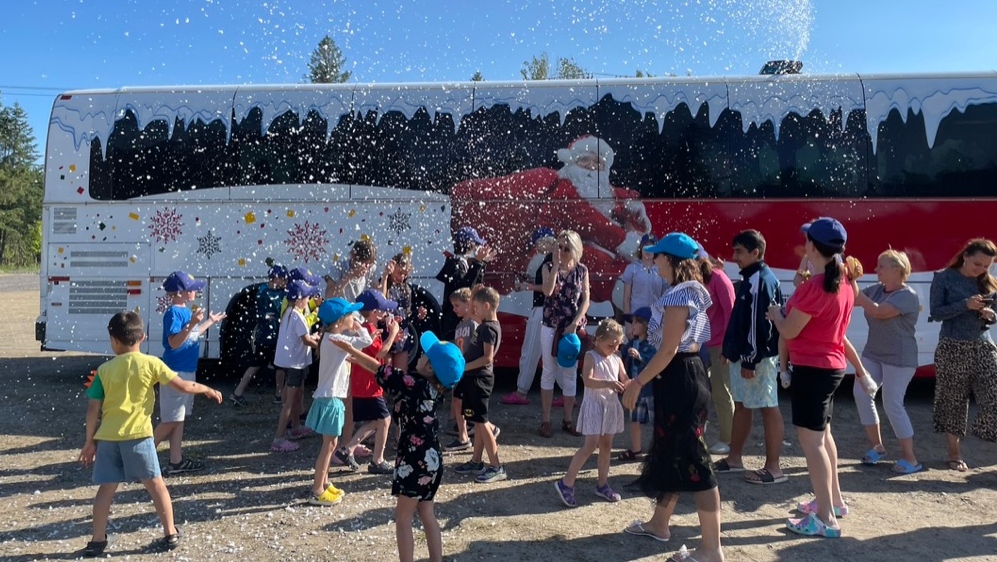 Santa's Bus arrives at the Village du Père Noël with almost 40 Ukrainians on board on July 9, 2022. (Source: Dmitri Tcherkasski)

HELPING UKRAINIANS AS A RUSSIAN

"We are Russian. We were born in Moscow. We are categorically against the war," said Tcherkasski and his daughter as soon as they first met the Ukrainian families, having previously immigrated to Canada in 2000.

He said his Russian origins do not cause any tension with the Ukrainian group, though "the feeling of guilt and shame falls upon the nation for allowing the war to happen in the first place."

However, there is tension between Tcherkasski and the people he knows in Russia, as most of them are in favour of the Kremlin's so-called "special military operation," including his own mother.

A significant majority (77 per cent) of Russians said they support Putin's actions in Ukraine, according to an independent survey conducted by Levada Center in late May.

The support is even stronger among Russians over the age of 55, reaching 83 per cent.

Tcherkasski said a long-time Ukrainian friend lost his wife and daughter when a Russian tank obliterated their vehicle just outside of Kyiv. Still, any attempts to share such personal stories "brought absolutely no result" to convince war supporters otherwise, he said.

He added that his efforts were "particularly useless" for the older generation that grew up in the Soviet Union, which generally pays close attention to Russian state TV channels.

"While we were afraid the Internet would ruin our children, television ruined our parents."