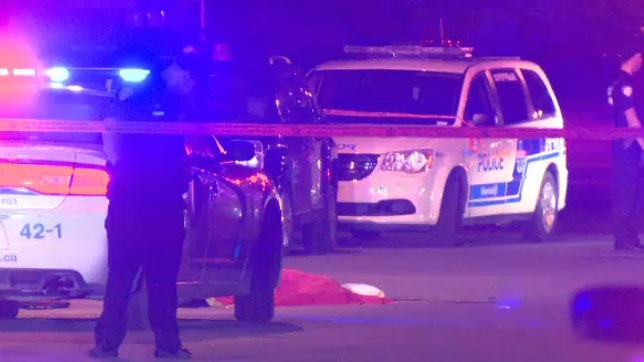 After 46 years of logging crime statistics on the island of Montreal, homicide rates have reached an all-time low.

Twenty two homicides were reported this year by Montreal police, with two more suspicious deaths from last year added to the list as the evidence compiled pointed to murder.

However, the most recent figures from Statistics Canada posits the SPVM as the police force with one of the lowest homicide clearance rates -- coming up behind province-wide counterparts like the Surete du Quebec and the Longueuil, Sherbrooke, and Quebec City police forces.

With a 96.7 per cent solve rate, the Greater Sudbury Police is the most successful police body polled by Statistics Canada.

On the opposite end of the spectrum is Montreal police -- only 63.5 per cent of homicides reported over the last 40 years are considered closed cases.

Among the unsolved cases, or cases where no arrests were made, are homicides linked to organized crime.

Montreal's crime rate has been gradually decreasing since statistics were first compiled in 1972, with the exception of 1975, when the city experienced a spate of murders -- 104 total.

Moving forward into 2018 -- a year unmarred by violent crime -- we're looking back at the cases pursued by Montreal police in 2017.

Around 9 p.m., several 911 calls were made reporting shots fired on Sabrevois St. near Des Recollets Ave. in Montreal North. Awada, 28, was shot at least once in the upper body – later succumbing to his injuries in hospital. He was known to police -- previously arrested in 2014 as part of a targeted sweep of the mafia.

Lizotte, at 60, was a proponent of poor health, and had been living in a senior’s home. Employees at the Emilie Gamelin residence on Dufrense St. said Lizotte had very limited mobility and relied on a wheelchair to get around. She also reportedly suffered from advanced Alzheimer’s disease, and a request for medically-assisted suicide was allegedly turned down.

On February 20, Lizotte was discovered in her room in cardiac arrest, and attempts to revive her were unsuccessful.

A cryptic Facebook post by Michel Cadotte – Lizotte’s 55-year-old partner – led to his eventual arrest at the residence.

The post read: “I've cracked. Nobody is asking me how I'm doing, but there, you know, I've agreed to her demands for helping in dying. I'm waiting for the police.”

Cadotte was charged with second-degree murder, and granted bail while awaiting trial. The case will return to court in January.

Just before 8 a.m., a passerby discovered the body of a man in a parking lot on M.B. Jodoin Ave. in Anjou – at the time of the finding, the victim was bleeding from a number of injuries that indicated violence.

The victim was later identified as 47-year-old Nicola Di Marco, a known Mafia affiliate. No arrests were made in the case.

Carriere’s body was discovered by firefighters after extinguishing a blaze that ravaged a duplex on St. Louis St. in Lachine. Police later determined that the fire was deliberately set, but two men -- both in their 20’s -- arrested after the incident were released without charges. The motive behind the arson is still unclear.

An altercation that erupted in a crowd after closing time on St. Laurent Blvd turned deadly when Lamothe, 24, was stabbed to death. Several others were treated for cuts and stab wounds.

The day following the attack, 25-year-old Kenneth Oteng turned himself in to police – two days later, he was arraigned in court and charged with first-degree murder in Lamothe’s death.

At the time of the 3 a.m. deluge, Oteng was out on bail, awaiting trial for outstanding drug charges.

In October, two other men were also charged with first-degree murder for their connection to the crime. A trial is expected to get underway in February.

A man was discovered lying in a pool of blood alongside the road at St. Jacques St. and Greene Avenue, just steps from the Place Saint Henri metro station. He was rushed to hospital and declared dead after an unsuccessful surgical intervention.

911 calls poured in from witnesses to a fight that broke out within a restaurant on the corner of Mackay and Ste. Catherine St. A young man in his 20’s was stabbed multiple times, and later located by police on Ste. Catherine and Crescent St. Though transported to hospital in critical condition, the victim’s injuries would prove fatal – he was pronounced dead early the next morning.

Five men – all in their 20’s – were arrested after the assault, and two were later released.

It’s believed that the victim was stabbed by his assailants while being mugged.

Gildea – a student at Concordia University-- was shot in the lower body after a dispute between two groups of men, and bled out in the parking lot of the Amazones strip club in NDG. Police were alerted to the body, discovered by passerby around 2:40 a.m. Gildea was rushed from the parking lot shared by the Amazones strip club and PJ’s Pub to the hospital, where he was pronounced dead.

In November, police re-issued an appeal to locate a suspect in the murder— 36-year-old Frederick Silva, who allegedly shot Gildea and fled the scene with three other suspects in an SUV,

Silva is also wanted for an attempted murder that took place in February inside of a Terrebonne restaurant. He and ten accomplices allegedly entered the restaurant and opened fire, hitting Salvatore Scoppa – a man with known ties to the Mafia. Scoppa survived the attack.

A woman discovered the body of a man in his 30’s inside of his Anjou home in the early evening. The man had sustained at least one gunshot wound to the head – media reports would later speculate about the victim’s ties to organized crime. No arrests were made.

A knife fight in a Pointe-Aux-Trembles park resulted in the death of a man in his 20’s. Police said the victim sustained numerous stab wounds to the lower body. Although police initially expected the man to survive, he succumbed to his injuries two days after the attack.

The stabbing allegedly occurred between several people, but suspects had fled by the time police arrived on-scene.

Charges were brought on one suspect – a minor – who is believed to be related to the victim.

A fight inside of a Saint-Leonard reception hall spilled out onto Provencher St. near Denis-Papin, where several gunshots were fired.

At 1:15 a.m., police received multiple 911 calls concerning a fight between a group of people. Upon arriving, police discovered the body of a man, 29, with multiple gunshot wounds to the upper body. Despite the first responders’ attempts to resuscitate, he was pronounced dead on-scene.

Witness accounts led police to believe that the victim was attending a wedding reception at the time of the outbreak. Other people involved in the altercation reportedly fled before police arrived.

Just hours after police responded to a call about a domestic dispute, a woman was discovered – conscious – in her Montreal North apartment, bleeding from multiple stab wounds. She was eight months pregnant, rushed to an operating room by first responders, where a baby boy was delivered via C-Section. The infant died later in the morning, but police confirmed that he had survived the delivery.

Sofiane Ghazi, 37, was apprehended later that same day in the neighbourhood, not far from his residence. Ghazi was charged with first-degree-murder for inflicting stab wounds to his partner’s belly with a BBQ fork, resulting in the subseqent death of their unborn child.

According to Canadian law, fetuses inside the womb are not considered legal victims. The legal loophole: if the child was born alive, injuries notwithstanding, it could be considered a human being. The medical facts of the case had an impact on the charges.

At the time, prosecutors referred to the case as “very rare” – although similar issues have been raised in previous cases, nothing in jurisprudence matched the specific circumstances of this homicide.

At 8:30 p.m, while children were milling around Laduversiere parc in Saint-Leonard playing football, a drive-by shooting ended the life of Mafia figure Antonio De Blasio, 45.

De Blasio bled out on the ground of the park after numerous shots were lodged in his upper body. He was pronounced dead in hospital. Police had previously warned De Blasio about threats on his life – he was allegedly involved in several murder plots during his tenure with local organized crime.

Witnesses say a man in a car drove by, fired a few shots, then peeled away without being intercepted. No arrests have been made.

Police believe that Belange descended to the vestibule of his apartment building on Lausanne Avenue in Montreal North when he was shot and killed by someone at the door. Belange was known to police for prior drug-related offenses. The suspect, or suspects, fled in a dark vehicle. No arrests have been made.

Close to 2 a.m., Sisi Thebert, a 26-year-old transgender sex worker, was discovered severely injured in the hallway of her apartment building in Point Saint-Charles. Thebert succumbed to her injuries – multiple stab and slash wounds – early the next morning in hospital. At the time, police struggled to establish a motive for the attack – but Thebert’s death prompted an outcry in the trans community, where violence is a prominent issue. Advocates expressed the belief that Thebert had resorted to sex work as a way to pay for surgeries.

John Edens Lindor, 24, was named as a suspect after surveillance footage confirmed he was in the building at the time of the attack. He was arrested in Ontario, and charged with second-degree murder.

A 64-year-old man allegedly used deadly force during a fight with his brother, 62, in a Montreal North apartment. A 911 call lead investigators to the residence, where they found one man unconscious with a serious head wound. Police said the injury was caused by “repeated physical force” to the head – he was pronounced dead in hospital later the same day.

A pedestrian discovered a woman’s body under a tarp in a vacant lot on Beaudry St, near Sherbrooke. At the time, police could not determine how long the body had been there for – but later established that it belonged to a 37-year-old woman.

Police initially believed that the victim had perished after a drug overdose.

The 60-year-old man who made the grim discovery was initially arrested and charged with committing an indignity to a body. Police then changed their initial hypothesis, and arrested the man – charging him with manslaughter in the woman’s death.

Fleury was found bleeding on a street in Hochelaga-Maisonneuve – he had been stabbed, sustaining serious injuries to his upper body. He later died in hospital. Police believe Fleury’s death was related to his alleged involvement in the narcotics trade.

When police arrived on-scene at a store parking lot, they discovered a man, 48, slumped behind the wheel of his vehicle. He was injured in both his upper and lower body by suspected gunshot wounds. Lamer was a well-known associate of the Hell’s Angels, and had previously served time for conspiracy to commit murder, drug trafficking, and gang activity – although he reportedly left the gang in 2002. No arrests have been made.

A family argument spun out of control in a Rosemont apartment, when a 75-year-old man allegedly shot and critically injured his 21-year-old stepson. Fleury later died in hospital. The stepfather was charged with first-degree murder, and the case is expected to return to court in January.

A 35-year-old attacked two women in an apartment on Souligny Ave. The two women were found inside of their apartment, both with stab wounds to the upper body. One woman, 55, was declared dead at the scene. A 75-year-old woman died later on in hospital.

Christian Pepin, 35, was arrested and charged with first degree murder in the stabbing deaths of the women: his mother, and his grandmother. Pepin’s motive for the attack is still unknown.