MONTREAL -- A 53-year-old Montreal woman alleges she was thrown to the ground by police after lowering her mask while leaving a metro station.

“I’m still traumatized by the situation,” said Dora Quintero Sanabria, who says she was tackled while exiting Georges-Vanier station on her way home from work on Oct. 5.

She says her glasses were foggy, and she was having trouble seeing. She pulled down her mask as she was exiting, she told CTV.

She says a police officer, who was standing outside the station, confronted her, and accused her of not wearing her mask while inside.

“[The officer] made some remarks about her French, which we think is an indication of bias,” said Fo Niemi, executive director of the Centre for Research-Action on Race Relations. “The situation escalated from there."

Thinking she was free to go, she says she turned to leave.

Then, she says, the officer grabbed her phone out of her hands, threw it into a nearby bush, and tackled her to the ground.

She says the dress she was wearing rode up, exposing her underwear. Instead of helping her cover up, she says the officer cuffed her.

“Nobody did anything for me,” she told CTV News.

She says he put his boot on her still-exposed hip, pinning her to the ground while he searched through her bag for ID.

"This is extremely humiliating,” said Niemi, “for a woman to be treated like that." 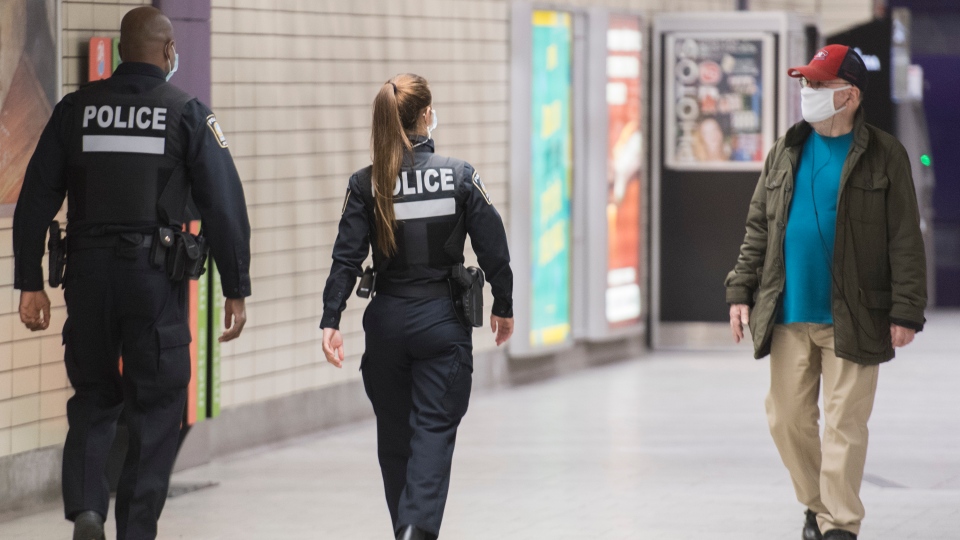 Police officers patrol a metro station in Montreal, Saturday, September 19, 2020, as the COVID-19 pandemic continues in Canada and around the world. THE CANADIAN PRESS/Graham Hughes

She says she suffered a number of injuries during the altercation, including a bruise on her right hip.

"There are ways to do it, [as opposed to] the zero-tolerance approach, plus excessive force, to the point where people have serious bodily and psychological damages,” said Niemi of the officer’s alleged conduct.

After around 25 minutes, Quintero Sanabria says she was released without a ticket, after which she filed a complaint with Montreal police.

Since then, she says, she’s been contacted by an investigator with the Surete du Quebec, though neither police department was willing to confirm to CTV whether an investigation has been opened.