With language police backtracking on pasta, other decisions come under scrutiny

MONTREAL—A day of public uproar over #Pastagate has revealed several other recent decisions made by the Office Quebecois de la langue francaise.

This week, the agency informed a restaurant owner that the words pasta, insalata, botteglia and several other Italian words appearing on menus violated section 51 of the Charter of the French language.

Massimo Lecas cooked up a storm when he put that letter up on social media sites. By the end of the day Wednesday the OQLF issued a statement that its agents had been too zealous in applying the law to Buonanotte—even though the charter specifically states that "no inscription in another language may be given greater prominence than that in French."

The OQLF said it will now consider a restaurant's "foreign specialties" when enforcing the law, even though the law as written does not allow any such exemption.

Diane De Courcy, the minister responsible for the French Language, said she was satisfied with the work done by the language watchdog.

"I agree with the position taken by the OQLF. In all the issues surrounding language, judgment and moderation must be what guides us. Corrective actions taken today by the Office confirm that I am right to trust their expertise and quality of work," she said in a statement.

According to the minister, the incident was caused by a “young inspector” just starting his career.

But while the word pasta may now be permitted on the menu of an Italian restaurant, the word "ristorante" outside is still off-limits.

According to Le Journal de Montreal, the owner of Ristorante Le Cantina was told the sign outside his establishment broke the law and must be changed.

The hitherto unheard of "foreign character" exemption will not apply to outside signage, where the law assumes that passersby must see a French descriptive term such as "restaurant" outside an establishment to know what it sells.

The owner of the St. Laurent Blvd. restaurant said it will cost him $20,000 to replace his custom sign.

Toby Lyle, the owner of Brit & Chips faces a similar dilemma. His establishment has been ordered to change signs inside and outside, and to remove a window decal that says "fish and chips" and replace it with one saying "poisson frit & frites."

He said he does not mind changing most items, but draws the line and wiping out fish and chips.

"They're telling us that 'poisson frit et frites' is the translation, but it's not. Not in French culture not in international culture," said Lyle.

"I can't comply with this because it will literally kill my business."

Meanwhile signs put up to promote public safety for school children have run afoul of Bill 101.

Several months ago Montreal police and the city of Montreal put up signs advising drivers to slow down in school zones.

French signs were put up on the yards and fences of francophone schools, while English signs went up at English schools.

According to La Presse the OQLF received countless complaints about the signs, which read "100% safety for my borough and me"

The agency ordered all signs removed by Jan. 30.

The city of Montreal had thought the English signs would be permitted as part of a public safety campaign exemption to the Charter, but the OQLF ruled that the signs were a preventive measure, and so the exemption did not apply.

At a Greek restaurant that's already had a run-in with the language police, owners have already put up French descriptions of spanakopita. But they question if one day souvlaki could be next on the hit list.

“You never know,” said the grill cook. “It could happen.”

A few blocks away at JR Bike Rental, owner Jamie Rosenbluth is now covering up all his English signs with a French warning to, “read at your own discretion.” But he refuses to make his French price list 30 per cent larger than the English one.

“Are they better than us? Are they 30 per cent better?” asked a visibly irate Rosenbluth. “Why don't we live in peace and keep going? What’s the big deal?”

As for Buonanotte, the restaurant where this controversy started earlier this week, the owner has been inundated with support. Massimo Lecas says the lesson he learned is that people should push back if they feel they're unfairly targeted by the language police.

On Friday night, the restaurant’s customers are organizing a party; the theme is “Pasta.” 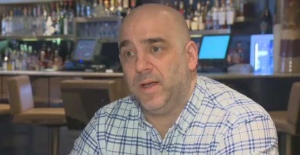 The owner of Buonanotte dishes on why he thinks it's ridiculous the OQLF investigated the word 'pasta' on his menu.