MONTREAL -- Anthony Liscio seemed to have it all: he was young, happily married and had a coveted job in finance. But all that came crashing down two years ago.

“I experienced a burnout at work… It was a really tough time,” he said. “It felt very heavy and it didn’t feel like I was being true to myself… My body shut down and it wasn’t just being tired… It was my body telling me that this wasn’t going to work anymore."

Exhausted and at the end of his rope, the 33-year-old quit his job in management consulting and investment banking after a decade-long career.

“It was very difficult to go from an everyday job, 9 to 5 sort of thing to being off work completely,” he told CTV News, “In that time, I had a lot of work to do on myself to get better and a lot of thinking to do in terms of what I wanted.”

After giving it all up in the pursuit of better mental health, Liscio started searching for ways to share his experience with others.

Then, by chance, a mutual friend introduced him to Manesh Girn, the founder of the Montreal chapter of the Samurai Brotherhood, a men’s health group originally from Vancouver, B.C.

“We connect with each other, share, challenge each other and have a place where you can authentically and vulnerably express yourselves,” Girn explains. “There are men of all types, different countries, different ethnicities, different ages. There are straight men, gay men, they’re all coming together and there’s no distinction made.”

The 25-year-old, who is currently working towards a PhD in neuroscience at McGill University, had been part of the Vancouver chapter — which boasts hundreds of members — for two years prior to moving to Montreal.

“We, as a group, provide a useful and valuable unmet need, which is having a space where men can open up and drop their masks and their facades," he stated.

Liscio's story isn’t a rare one. In fact, a 2019 study by the Canadian Men’s Health Foundation (CMHF) found the majority of Canadian men are so stressed out at work that they regularly indulge in unhealthy habits, like eating poorly, sleeping little and working on vacation or when sick.

Ali Sicimli, 36, admits he’s all too familiar with the perils of burnout; just a few years ago, he was working a full-time job, while also running his own business.

“I pushed myself so hard to the point of exhaustion,” he remembers, adding that his company folded in 2017. “It was basically me carrying the whole load of it, so when I crumbled, the whole thing crumbled.”

He spiralled into a bad burnout that transformed into a deep depression.

“The depression was something that lasted over a year, and chronic depression as well afterwards, but I learned a lot from it. You know, it was probably one of the best things that ever happened to me,” Sicimli admitted. “The way I got out of it, strangely enough, is when I acknowledged what was going on.” 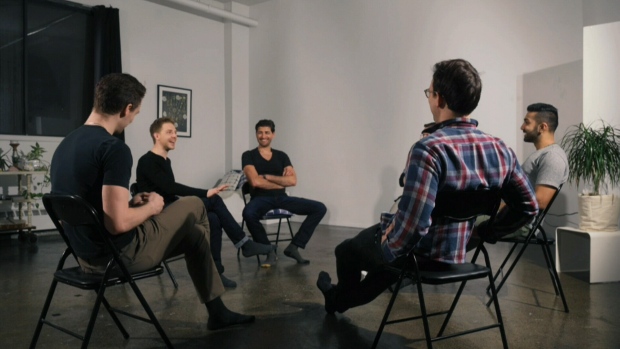 He is now the co-captain of the Montreal chapter of the Samurai Brotherhood.

“Joining the group gave me that support and the safe space where I could easily open up and share my issues,” he said. "I had to face all my responsibilities. I was held accountable and a lot of these patterns were broken down and I saw a huge difference in my own personal life."

The Samurai Brotherhood meets every Monday at Haven Creative Space, a studio Liscio cofounded and curates with his wife, Liana Carbone.

“This change of career, along with the support of other people, other men specifically, keeping me accountable, keeping me on track and learning things about myself and others that I would never learn without doing something like this,” he said.

He admits, until now, he had never really thought about what it means to be a man, nor how or why he identifies as one.

“I don’t think, as a young man, I even cared about these types of things,” Liscio told CTV News. “The group has helped me unlock many things on an intellectual level, like what it means to be a man, how do I see myself in the world and how has society influenced the way we behave, as well as on a more emotional and more spiritual level.”

He adds turning to entrepreneurship hasn’t necessarily made his life any easier — in fact, he muses he works more hours now than ever before.

There is great power that comes from simply being seen by your peers, Sicimli adds.

"When you can openly share what’s going on in your life, your feelings, your emotions, whatever’s there in that moment and being recognized, by being seen by other men, it definitely does something to you,” he said.

The Samurai Brotherhood meets every Monday at 6:30 p.m. at Haven Creative Space. There are now about eight men who regularly attend the sessions, ranging in age from 20 to 70.

Your family doctor (if you have one)

Your local CLSC, CISSS or CIUSSS: 811

Mental health care in Canada: Where to find help

How to join the conversation and help raise funds with #BellLetsTalk

Advice for parents of kids with mental health challenges: Don't look away