'We understand the despair': Ramming incident in Ste-Marthe-sur-le-Lac

Quebec is promising new help for flood victims after a driver rammed a car into Red Cross and Public Security offices in Ste-Marthe-sur-le-Lac.

Jean-Francois Chenier, 38, appeared in court Thursday to face charges of dangerous driving and criminal assault in connection with the incident. He will remain behind bars until his next court appearance in mid-July.

Deux-Montagnes police spokesperson Christopher Harding said police received a call about a man raising his voice and “acting inappropriately” at the offices at 5:45 p.m. Wednesday.

Harding said the matter was dealt with and the man left the premises. Minutes later, a man drove a car into the building, shattering the glass.

“Everything leads us to believe this was an intentional act,” said Harding.

While there were about 10 employees inside the building at the time, Harding said no one was injured. 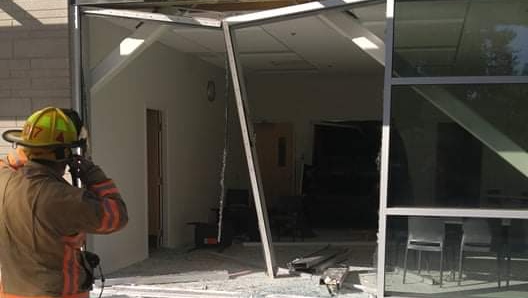 Harding could not say if the man was one of the 6,000 people who were forced from their homes after a dike burst during spring flooding, but he said the man “frequently” visited the Red Cross and Public Security offices in recent weeks.

Construction crews installed concrete bollards in front of the building while others patched up the window and prepared to repair the building.

The Public Security Ministry cancelled appointments on Thursday with about 100 people, who, like many others, say they are frustrated while waiting to find out what compensation they will receive for their water-damaged homes.

Some will be able to rebuild, while others wait for new flood maps to determine if their homes sit on a designated flood zone. Those homeowners will receive a buyout package.

Quebec Public Security Minister Genevieve Guilbault said she knew some people would be disappointed they were not getting everything they asked for.

"We understand the despair of the people in Ste-Marthe-sur-le-Lac. We really understand the despair. People are expecting answers to some questions and about that, we will make an important announcement in the next few days. Some of my colleagues will make an important announcement regarding the post-flooding of 2019," said Guilbault.

Premier Francois Legault added that he's working on speeding up a resolution for flood victims.

Liberal public health critic Andre Fortin said he felt sad for people struggling to deal with the loss of their homes.

He encouraged friends and neighbours to be supportive of those who had lived through a disaster.

The mayor of Ste-Marthe-sur-le-Lac is hoping for a government decree that will allow people living in the area that flooded in April to rebuild.

With notes from Annie DeMelt