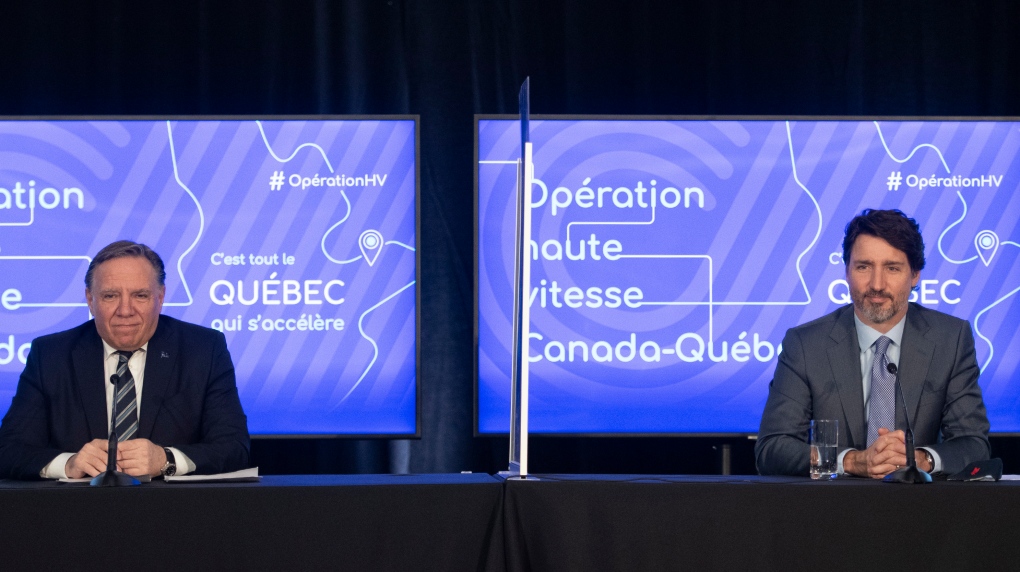 At a press conference announcing broadband internet funding Monday, Trudeau and Quebec Premier Francois Legault slammed online comments from law professor Amir Attaran, who claims the province is led by "a white supremacist government" and too tolerant of racism.

"Enough of the Quebec bashing," Trudeau said in French.

"This is unacceptable," Legault added in French, stating he was "disappointed" the university's president opted not to condemn Attaran's posts more vehemently.

University of Ottawa president Jacques Fremont said in a letter to Parti Quebecois Leader Paul Saint-Pierre Plamondon on Sunday that the institution does not share Attaran's opinions, but that they were posted on his personal Twitter account and thus not subject to sanction, as comments uttered in the classroom might be.

"I deplore these kinds of highly polarizing statements made in public forums, particularly on social media. Along with others, I find it disturbing to see such a vindictive tone and personal attacks posted on Twitter and other platforms," Fremont wrote.

"Nonetheless, freedom of expression, we will agree, is not a buffet where one can pick and choose what kind of speech is deemed acceptable or not."

Plamondon had asked for an apology from the university following recent remarks from Attaran, whose provocative Twitter posts have sparked numerous social media dust-ups in recent days.

He has called Quebec's culture racist, dubbing the province the ".AlabamaOfTheNorth" and accusing its nurses of "medical lynching" in regard to Joyce Echaquan, a 37-year-old Indigenous woman who died in a Quebec hospital in 2020.

"The nation of Quebec is led by a white supremacist government," Attaran said in a Twitter post Sunday.

His scathing posts aren't limited to a single province. Attaran also referred to the RCMP as the "Royal Canadian Mounted Pigs" in a recent post on an independent commission's finding that Mounties dealt in a discriminatory manner with the family of Colten Boushie, a 22-year-old First Nations man who was fatally shot by Saskatchewan farmer Gerald Stanley.

"Accusing the nation of Quebec of being systematically racist, that is not, to most, a difficult proposition -- although it has proven extremely difficult for Mr. Legault and his government," Attaran said in an interview Monday.

"It merely means you treat whites as supreme. And Quebec undeniably does so, as when a government hospital advertises for 'white women only,"' he said, referring to job postings for patient attendants at a hospital north of Montreal last fall.Bloc Quebecois MP Alain Therrien joined the fray in the House of Commons on Monday, saying Attaran's posts -- and the university's response -- demonstrate Quebecers are a minority that remains subject to "hate speech without any consequences."

"In Canada, Quebec-bashing is allowed and it may even pay off," Therrien said, calling Attaran "ignorant" and a "francophobe."

Attaran responded by calling the Bloc a "white supremacist party."

This report by The Canadian Press was first published March 22, 2021.