Timeline: Some key dates in the aftermath of the Lac-Megantic train disaster 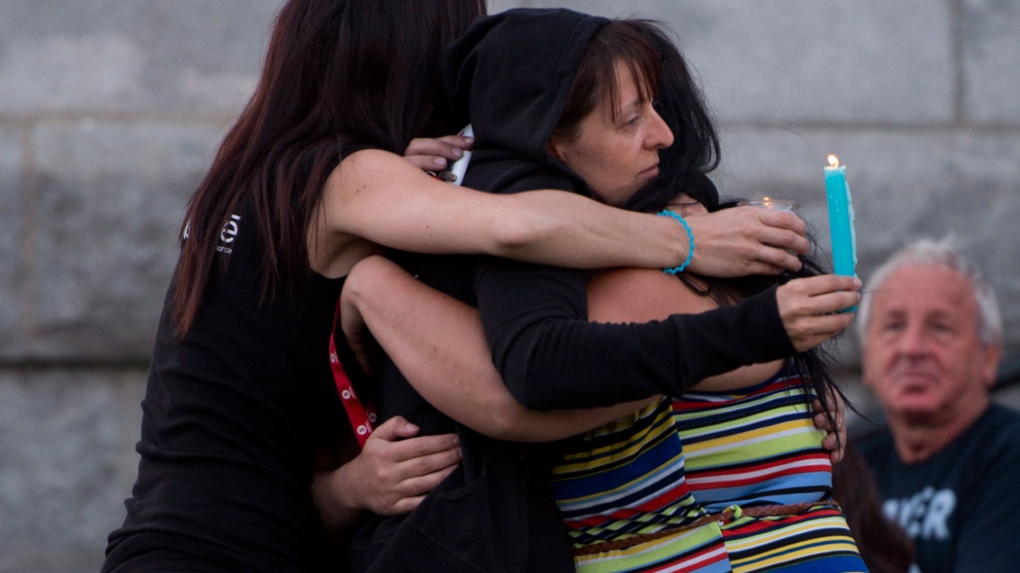 People comfort each other in front of the St-Agnes church during a vigil for the victims of the train crash Lac-Megantic, Que., Friday, July 12, 2013. (Jacques Boissinot / THE CANADIAN PRESS)

The train disaster in Lac-Megantic, Que., ushered in a time of local tragedy and brought rail transport in the country under scrutiny.

Here is a timeline of key moments since the derailment:

July 6: An unattended train with five locomotives and 72 tank cars carrying crude oil rolls down an incline before coming off the tracks in Lac-Megantic, Que. The derailment caused a series of explosions that sent fireballs up into the air. The downtown core was eviscerated, with a bustling bar, the library, and a cherished waterside park among the dozens of structures destroyed. Officials evacuated nearby homes and said at least one person had died.

July 7: Prime Minister Stephen Harper visited Lac-Megantic, describing the area as a war zone and offering federal relief to rebuild the town. Police officially raised the death toll to five while estimating at least 40 people were still unaccounted for. Train operator Montreal, Maine and Atlantic Railway issued a statement saying the locomotive was shut down after the departure of the engineer and this may have resulted in the release of air brakes on the locomotive that was holding the train in place.

July 8: The Federal Transportation Safety Board and Quebec provincial police announced they would separately investigate the derailment. Firefighters from nearby Nantes said they had been called to fight a fire on board the train hours before it came off the tracks in Lac-Megantic. The rail company suggested the decision to shut off the locomotive to put out the fire might have disabled the brakes, but the fire chief said shutting the engine off was standard procedure dictated by the railway. Officials raised the death toll to 13, while the Queen issued a statement expressing condolences.

July 9: Quebec police announced they were treating the derailment site as a crime scene and floated the possibility of laying criminal negligence charges. About 1,200 residents were allowed to return home.

July 10: Montreal, Maine and Atlantic chairman Edward Burkhardt visited Lac-Megantic, where he was greeted by angry hecklers blaming him and his company for the disaster. He said the engineer in charge of the train had been suspended. Police raised the official death toll to 20, adding they expected a total of close to 50 victims. Quebec Premier Pauline Marois announced the province would lower all flags to half-mast for a week and said the government would offer the town $60 million in aid.

July 11: Marois made an official visit to the town as her municipal counterpart lashed out at rail officials. Lac-Megantic mayor Colette Roy-Laroche spoke out in criticism of Burkhardt, alleging he cancelled a planned meeting with her during his visit to the town. About 600 evacuated residents were allowed to return home.

July 12: The Transportation Safety Board described the Lac-Megantic disaster as potentially the worst in Canadian history, adding it would take months to investigate. Residents held a candlelight vigil in town.

July 14: Authorities demolished two buildings that were posing a danger to the recovery effort. Municipal council officially lodged a request with the provincial government to postpone upcoming elections for two years in light of the disaster.

July 19: The Transportation Safety Board took the unusual step of recommending two immediate changes to rail safety despite the fact that its investigation is not over. The board recommended that dangerous goods should not be left unattended on a main track and also that rail equipment be properly secured. Rock legend Paul McCartney reached out to Lac-Megantic residents by offering free tickets to an upcoming show in Quebec City.

July 22: The federal government matched provincial aid efforts by announcing a $60 million fund to help Lac-Megantic rebuild. In the U.S., a wrongful-death lawsuit was filed in an Illinois court against MMA and its parent company, Burkhardt and several U.S. petroleum companies linked to the disaster. An Illinois lawyer, who filed the court documents on behalf of the family of a Lac-Megantic man killed by the derailment, said he expects to present many more similar suits that could seek millions in damages from the defendants.

July 25: Police began conducting an investigation at an MMA office in Farnham, Que., but declined to discuss details.