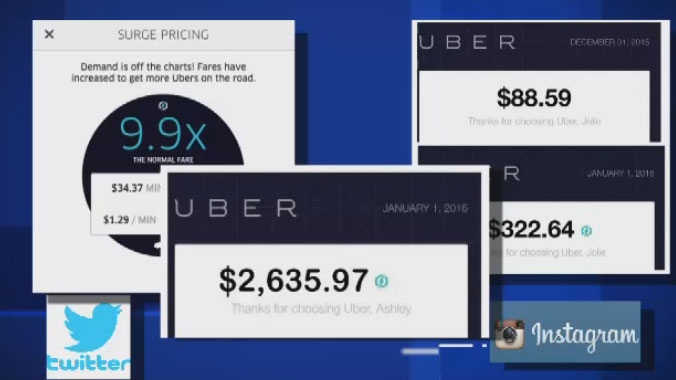 Uber says it uses surge pricing to convince drivers to stay on the road during peak times.

Taxi drivers are seeking permission to launch a class action lawsuit against Uber.

The Steelworkers Union, which represents 4,000 taxi drivers, announced Wednesday they are applying to court for permission to sue the on-demand car service Uber and the provincial government.

Lawyer Marc-Antoine Cloutier will represent the union in its legal battle.

The provincial government has been criticized for demanding taxi drivers in Quebec obtain special permits and licenses to practice their trade, but yet turn a blind eye to drivers working for Uber doing the same thing.

Uber has said it has no employees, but instead calls all of its on-demand drivers independent contractors.

This classification is being challenged in other legal jurisdictions, with lawyers saying Uber should not be allowed to avoid paying into workers compensation, employment insurance and other government-mandated benefits.

A spokesperson for the Steelworkers Union, Benoti Jugand, said drivers will meet on Jan. 31 to discuss the legal action at length.

Uber spokesperson Jean-Christophe La Rue sent a statement to CTV Montreal, stating: This protectionist class action lawsuit is without merit especially since some Quebec taxi companies are saying they had a record year in 2015.

La Rue was referring to a radio interview on Jan. 4, 2016, where Abdallah Homsy of Co-op Taxi said "We have improved our service. And I can tell you that several thousand people, the day and the evening of the 31st to Jan. 1st, several thousand people used our App. We had an almost record year in numbers of work, in numbers of trips, for journeys in the city of Quebec for trips on New Year's Eve."