It was busier than usual outside of Milano grocery store on St. Laurent Saturday as a small crowd of people protested the eviction of an 82-year-old man who lives in the same building.

The protesters handed out leaflets saying the owners of the store, listed as owners of the entire building, are unfairly trying to evict Pierino Di Tonno in order to subdivide his apartment. 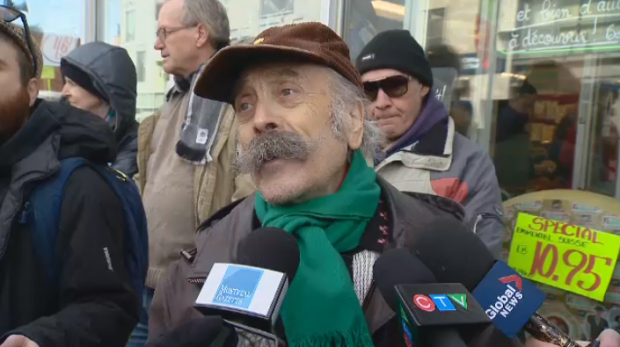 Di Tonno, a professional photographer, has lived upstairs from Milano for almost 40 years. His supporters, people working with the Petite Patrie housing committee, say the elderly are victims in a changing economy.

“Since they stay for a long time in their apartment, the rent is not as high as [other rents] in Petite Patrie. So the owners want to make a little money and they kick their tenants out,” said Martin Blanchard of the Petite Patrie Housing Committee. 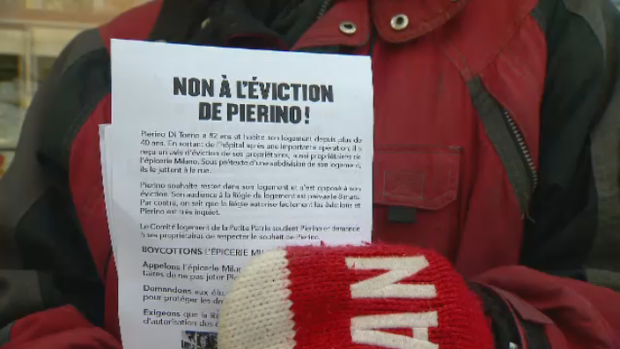 A protester holds a flyer saying "No to the eviction of Pierino," a man who has been living in his Petite Patrie apartment for nearly 40 years.

Di Tonno's landlords were not available for comment. Several passersby said they felt upset about the situation.

"Elderly people, they don't deserve to be treated this way. It's very unfortunate but see, that's 2016," said one man.

The committee is urging politicians in the National Assembly to adopt proposed legislation that would better protect seniors who rent.

Bill 492 is a private member's bill that was put forward by Quebec solidaire's Francoise David. If passed, when an owner wants to do work or repossession, they would have to find an apartment for the tenant first.

But for Di Tonno, the bill can't be passed soon enough. His case goes before the rental board Tuesday.