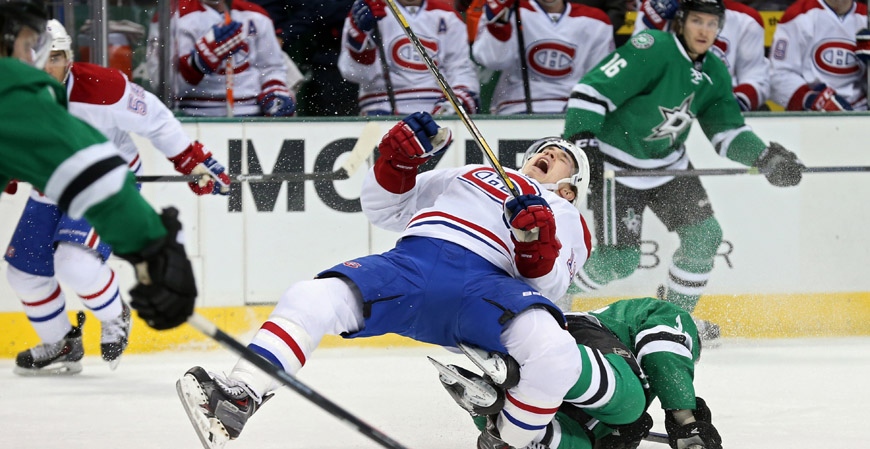 Lars Eller played the hero in Dallas by restoring the Canadiens' lead in the third period Friday to help steer the Canadiens to a 6-4 win.

The Dane's marker gave the Habs a 5-4 lead after the Canadiens coughed up a pair to allow the Stars to tie it.

Just minutes before, the Habs once again wilted in the third period to allow the Dallas Stars to score a pair of goals to lock up the score 4-4 in a game that the Habs seemed to lead safely just minutes earlier.

P.K. Subban left some jaws dropping earlier, as he scored once and assisted on two goals to help the Canadiens to a 4-2 lead into the third period but Dallas responded with a pair to of goals 47 seconds apart to notch up the score.

The game started on a discouraging note for the Habs, as Dallas’ most lethal connection of Jamie Benn and Tyler Seguin hooked up to give the Stars a lead at 6:12 in the first. Benn scored his 14th on a feed from Seguin to open the scoring.

But Max Pacioretty evened it up as he corralled a long breakaway pass launched by Subban and shot low past Kari Lehtonen, for his 18th of the season to tie the affair at 11:00.

The Canadiens took the lead on a David Desharnais goal, once again orchestrated by Subban, who slipped around a defender at the point and advanced to the circle, where he slipped the puck to the slot. Desharnais then put it in past Lehtonen for his fifth of the season at 1:35 of the second period.

Eighteen year old Russian teenage giant Valeri Nichushkin then evened things up at 2-2 at 5:23 of the second on a penalty shot that he was awarded after being hauled down in the circle to Price’s right.

Nichuskin - the 10th overall in the most recent draft - shot low on Price's glove side to net the marker.

But Subban once again swooped in deep into the Dallas zone and took advantage of some wobbly defending by the inexperienced Dallas defence to score his seventh, with assists from Pacioretty and Carey Price.

The second period saw both sides try to dig in and establish dominance, as Ryan White and Cameron Gaunce were sent for five minutes after a fistight and Travis Moen and Antoine Roussel did the same three minute later.

The Canadiens added to their lead early in the third period, as Brendan Gallagher shoveled a hard rebound off the boards behind the Dallas net past Lehtonen to make it 4-2.

Gallagher, standing to the right of the Dallas net, was in Johnny-on-the-spot to backhand the rebound home. The goal, Gallagher's 11th was scored on the powerplay and Pacioretty and Andrei Markov earned assists on the tally.

But Gallagher was soon after sent to the box for roughing and Tyler Seguin made him pay for his sin by swooping down the right wing past Douglas Murray and blasting a slapshot past Price.

Brendan Dillon then duplicated the feat, shooting high on Price's glove side to tie the score at four, just 47 seconds after Seguin scored.

But the Habs were not yet out of it as Lars Eller allowed Dallas defenceman Alex Goligoski to slide past him, as he rifled a high wrist shot past Lehtonen to give the Habs a 5-4 lead.

The Stars appeared ready to give up more goals but Lehtonen stoned Desharnais on a breakaway and then stymied another two-man rush.

The Habs finally finished the scoring as Max Pacioretty scored into an open net after once again being sprung by P.K. Subban.