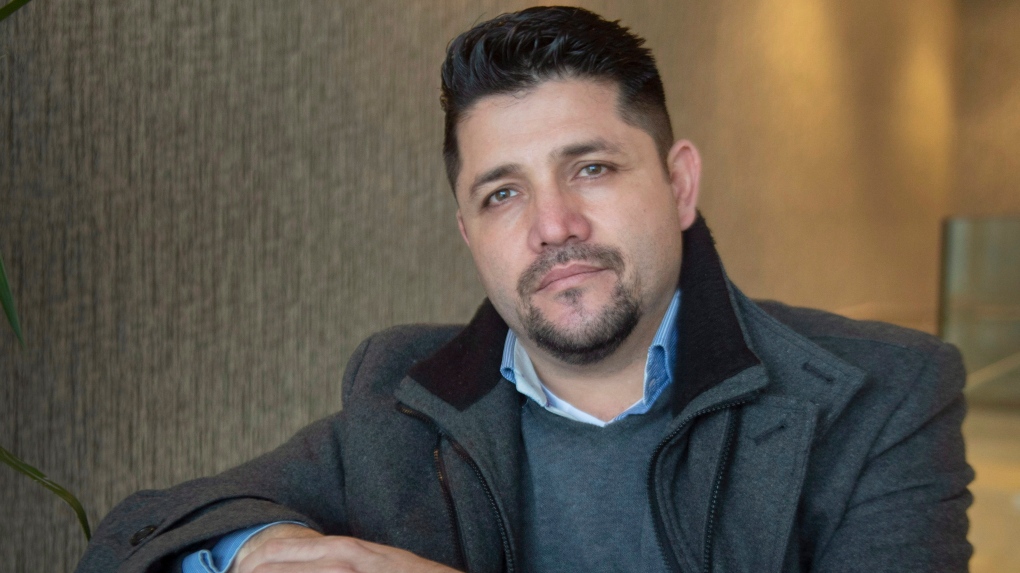 Hugo Ruiz at his home in Laval, Que., Friday, Nov. 30, 2018. Ruiz, who is a software engineer from Colombia, says he has trouble getting government help because he isn't on welfare. THE CANADIAN PRESS/Ryan Remiorz

Hugo Hernan Ruiz, a 42-year-old systems engineer from Colombia, has a master's degree in his field and ran the IT department of an oil company in his home country.

His French is excellent considering he arrived in Quebec in 2016 with little knowledge of the language. But like many highly educated newcomers to the province, Ruiz has struggled to find work despite being selected as a skilled immigrant by provincial authorities.

After failing to find a job, he decided to open his own consulting business to take advantage of his South American contacts. He applied for a provincial program that assists budding entrepreneurs with grants, marketing and training.

But he was rejected because the program was for people who were on welfare or who had received Employment Insurance -- and he fit neither category.

It would become a common refrain, he said, as he tried unsuccessfully to navigate the Quebec bureaucracy.

"I think there needs to be a reflection," Ruiz said over coffee at a strip mall in the Montreal suburb of Laval, where he settled with his wife and two children. "What happens to immigrants who are trying to succeed and who don't come here to live off the government?"

As Quebec Premier Francois Legault moves to reduce immigration in order, he says, to ensure newcomers learn French and find work, Ruiz's case highlights the obstacles and contradictions facing educated immigrants who are neither poor nor wealthy.

Yann Hairaud, head of a Montreal-based immigrant employment centre, said he knows of cases where skilled workers find options closed to them because they aren't on welfare.

"Unfortunately yes," he said in an interview. "These situations can happen. There is a certain incoherence in some of the rules that exist for newcomers."

Shortly after Ruiz arrived in Quebec, he enrolled in a French-language program to study what's known as the internet of things -- the network of objects that contain electronics and can interact with one another.

"I thought that instead of taking French courses, I would take a French-language course in my field, so I would learn both," he said.

He graduated with a vocational certificate last August -- but because the government didn't fully pay for his training, more doors were closed to him. A paid public-sector internship caught his eye, but to get it he had to qualify for a provincial salary subsidy.

He was rejected for the subsidy, he explained, because the government hadn't paid for his training.

"I brought all my savings with me (from Colombia) and I prepared financially in order to avoid asking for welfare," Ruiz said. "I'm not criticizing the Employment Department or the government. But I think the country needs to reflect on whether the immigration system encourages immigrants to go on welfare."

Dominique Anglade, immigration critic for the provincial Liberals, has not heard of immigrants going on welfare to land jobs, but she acknowledged those on social assistance have a certain advantage.

Anglade, a former economy minister, said in an interview that "a high percentage" of immigrants fail to complete the necessary training to have their skills recognized in Quebec, in part because of the high costs involved.

"When you go on welfare, you do have some support that can help you actually accomplish finding a job and everything else," she said. She blamed the discrepancy on government departments not working hand in hand.

Employment Department spokesman Vincent Breton did not respond directly to questions about whether people who are not receiving welfare are at a disadvantage when seeking work.

"As you know, the Employment Department offers many measures and programs for those who want to integrate into the workforce," Breton said in an email, adding that each file is analyzed on its individual merits.

Hairaud, whose organization CITIM works with about 1,800 immigrants a year, said the Employment Department gives priority to certain groups, including those who are on welfare or unemployment insurance.

Quebec seeks out skilled workers, he noted, but they are ineligible for government support programs if they are deemed too successful.

"It's contradictory, the right hand doesn't know what the left is doing," Hairaud said.

Despite the difficulties, the employment landscape is improving for immigrants, partly due to Quebec's strong economy. In August 2018, the unemployment rate for immigrants between the ages of 25 and 54 fell to 6.1 per cent after hovering above 10 per cent for much of the previous decade, the Institut du Quebec reported.

Ruiz said he's happy in Canada. His two young children are in school, and he wants to start a new life here. But he questions the value Canada places on the first generation of immigrants.

"My experience looking for work has been bizarre," he said. "What is the life for professionals who come here? Is the first generation of immigrants important to Canada?"