MONTREAL -- Another 25 "traumatized" dogs rescued from South Korean dog-meat farms will arrive at an emergency shelter in Vaudreuil-Dorion on Thursday.

The dogs follow 25 others who took the same long path towards a better life in Montreal just last month, part of a bigger group of almost 200 that Humane Society International/Canada and Friends of HSI say they have rescued from the farms and slaughter facilities to date.

The others dogs in the group are destined for homes in the U.S. and U.K.

The group of 200 includes golden retrievers, a poodle, Korean jindos and mastiffs, Pomeranians, terriers and a Labrador, the Humane Society said.

Dog meat farming was ruled illegal by a South Korean court in a landmark decision over two years ago, and most South Koreans want to put an end to the use of dog meat as food, with 60 per cent of South Koreans suppporting a ban on dog farming.

But that has not stopped the activity -- to do so will take transitions for both the dogs and the farmers.

The Humane Society says dogs raised on dog meat farms in South Korea suffer for their entire lives, living in filthy, barren cages, with little access to food or water and no veterinary care.

At the farm the dogs came from, "the conditions were truly pitiful, and when we found these dogs they had looks of utter despair on their faces that will haunt us forever," said Nara Kim, the manager of the Humane Society's Korea dog meat campaign.

"Many of them are covered in painful sores and wounds from neglect, some have inflamed eyes and peer out blindly from their cage." 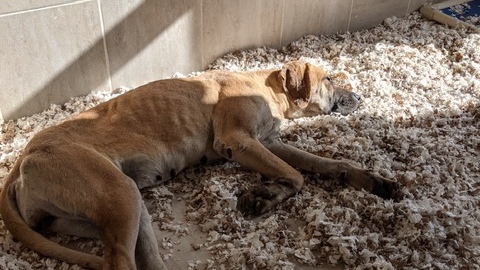 The dogs heading to Montreal will go to a shelter just outside the city where they will be prepared for possible adoption, said a Humane Society release.

"Our expert team will work with these dogs around the clock to make sure each and every one of them gets a second chance and a forever home," said Ewa Demianowicz, a senior campaign manager for Humane Society Canada.

In South Korea, the farmers also must be retrained for other work in order to end the industry completely.