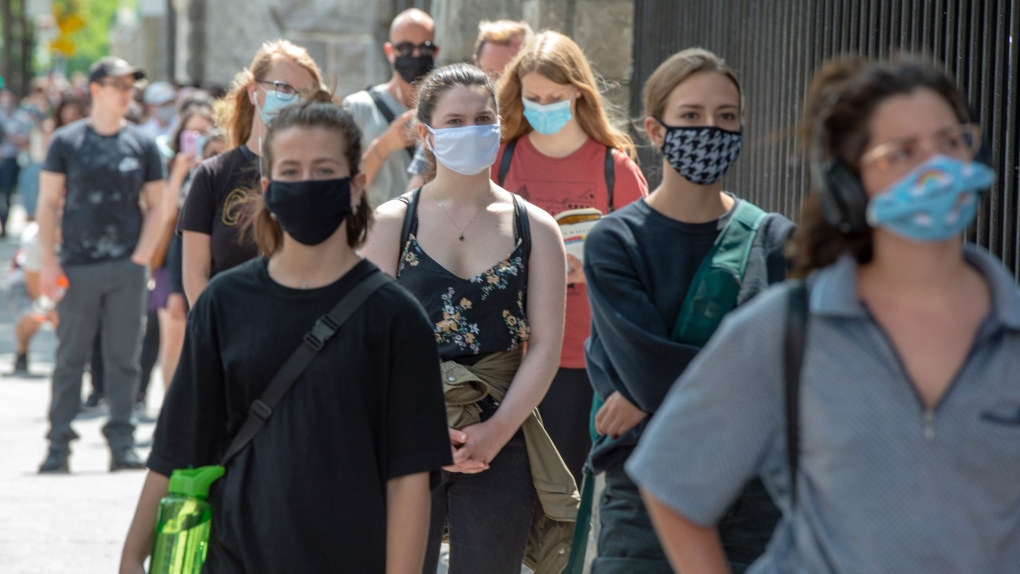 Hundreds of people lineup at the COVID-19 testing clinic Tuesday, July 14, 2020 in Montreal. The city has recommended that anyone who has been in a bar since July 1, 2020 to get tested.THE CANADIAN PRESS/Ryan Remiorz

MONTREAL -- The number of COVID-19 cases in Quebec rose by 171 Saturday, one of the highest single daily increases since early June.

There have been two new deaths, the province said. However, a third death that occurred before July 18 was also added to the official count, health authorities explained, which brings the total death count up by three.

All three new deaths were recorded in the Laurentides region north of Montreal.

The additions bring the new total of people infected in the province to 58,414, and the overall number of deaths to 5,666.

The daily increase is one of the highest since early June. On June 7 the same number of new cases, 171, was reported. The only day since that has seen a higher daily increase was July 20, this past Monday, when 180 new cases were reported.

Hospitalizations, however, continued to decline, as they have for the last few days. They were down 14.

The number of people in intensive care, 12, is unchanged from Friday.

A total of 50,713 people have now recovered from the virus in Quebec.

The hardest-hit region was Montreal, which accounted for 85 new cases. Montérégie saw an increase of 34, the Laurentides had 18, and Laval had 11.

The distribution of cases among different age groups remained virtually unchanged. The group with the biggest share of cases remains people in their 40s, who make up 15 per cent of Quebec's cases, followed closely by people in their 50s, who account for 14.3 per cent of cases.

An earlier version of this story reported that today's numbers were the highest in a single day in the past seven weeks. In fact, they're the second highest, as one day this week saw 180 new cases. CTV regrets the error.