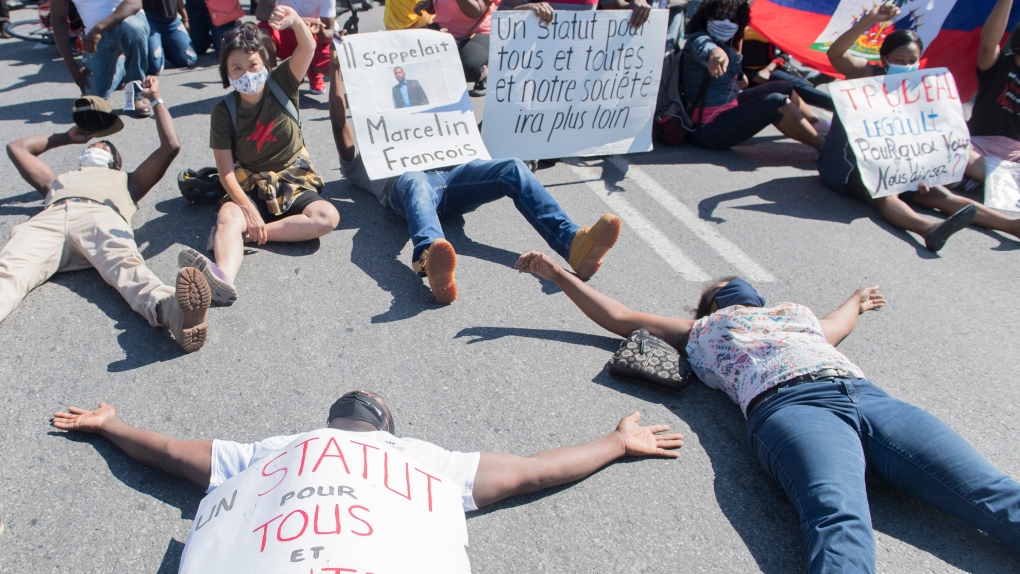 MONTREAL -- Advocates for asylum seekers who worked in health care during the pandemic's first wave are calling on Quebec to speed up the processing of immigration applications from workers dubbed "guardian angels" by the premier.

In December, the federal government launched two special programs allowing asylum seekers who worked in the health-care sector during the early part of the health crisis to apply for permanent residency.

One program, which applies outside Quebec, has received 932 applications, according to the most recent data available. Of those, 459 had been approved in principle as of Feb. 20, the federal Immigration Department said in an email.

The other program -- run through an agreement between Ottawa and Quebec -- has received 721 applications. Of those, just three have been approved in principle, according to the federal government.

Wilner Cayo, president of Debout pour la dignite, a group that advocates for asylum seekers to be given status, said the difference shows a lack of political commitment from Quebec.

"Quebec has always been very reluctant to recognize the extraordinary contribution of the 'guardian angel' asylum seekers," Cayo said in an interview Tuesday.

Premier Francois Legault said Tuesday he was unaware Quebec was lagging behind other provinces, adding that the criteria for the program was decided in conjunction with the federal government.

"There is no instruction given not to accelerate the acceptance of these people," Legault told reporters in Quebec City.

"On the contrary, we want to keep our word."

Cayo said the delays have caused people to put their lives on hold. Some "guardian angels," he said, are waiting for permanent residency so they can earn a degree or take a training program.

Many are parents, he said, adding that without permanent residency, they don't have access to Quebec's public daycare program. For people with low salaries, paying for private daycare has a big impact on their quality of life, Cayo said.

"It's a big disadvantage."

Marjorie Villefranche, director of La Maison d'Haiti, a community group that works with newly arrived immigrants, said applicants in Quebec have an additional step compared with asylum seekers in the rest of the country.

Villefranche said Quebec needs to put additional resources into application processing. "I don't think there's any political will," she said in a recent interview.

Flore Bouchon, a spokeswoman for Quebec Immigration Minister Nadine Girault, said the government hasn't received any formal complaints about the program from immigration support organizations or from the affected asylum seekers.

Files are processed "within a very reasonable time frame, 21 days on average," she wrote in a recent email. The number of applicants who have received Quebec selection certificates is a sign of the program's success, she wrote.

Alexander Cohen, press secretary for federal Immigration Minister Marco Mendicino, said delays are to be expected with a new program. Ottawa's priority, he said in a recent interview, is expanding the program to include more workers.

The two special programs are only open to people who worked at least 120 hours between March 13 and Aug. 14, 2020, and who provided direct care in a health-care establishment in Canada.

Villefanche said she would like to see the program expanded to more workers who may have been exposed to COVID-19 on the job but who didn't provide direct care, such as cleaning staff.

She said she would also like the August deadline extended because she said it's not fair to people who provided vital care during the second wave of the pandemic.

"It's like if there was a good wave and a bad wave," she said. "This is ridiculous."

This report by The Canadian Press was first published March 24, 2021.