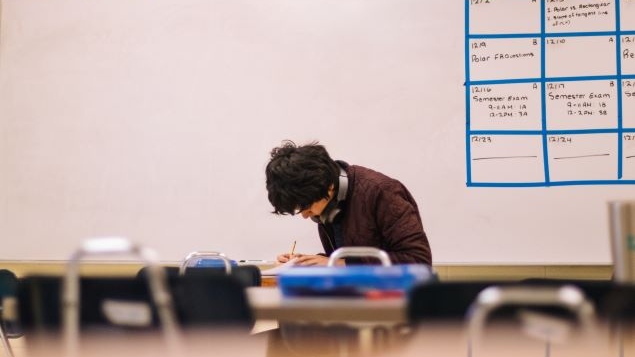 As the new school year begins, Quebec high school students must take the new Quebec Culture and Citizenship (QCC) course that replaces Ethics and Religious Culture (ERC), but according to an analysis published Wednesday by two researchers associated with the Institut de recherche sur le Québec, the new approach could open the door to legal challenges.

"In our opinion, in light of current events, it is likely, even very likely, that there will be a legal challenge," reads the document entitled "From Ethics and Religious Culture to Quebec Culture and Citizenship," written by lawyer François Côté and teacher David Santarossa.

After analyzing the content of the new course in depth and comparing it to its predecessor, Côté concluded that the new approach, which proposes a critical reflection of religions by citizens, opens the door to probable legal challenges.

"We are moving away from the forced deference that characterized the CRS course," said Côté, a specialist in Quebec law theory, civil law and fundamental freedoms. "This divergence could be perceived as an infringement of fundamental rights," he predicted, insisting that he "strongly disagrees" with such a position.

Religious parents who want to pass on their faith to their children may fear that their convictions will be undermined if students are asked to think critically about the religious phenomenon and its impact on the evolution of Quebec society.

"It's the 'critical thinking' part of religion," said Côté in an interview with The Canadian Press. "In the CRS course, religious beliefs and especially religious practices were not questioned. It was essentially the academic consecration of the culture of reasonable accommodation."

Although he is fairly convinced that there will be legal challenges, Côté maintained that the success of these proceedings is far from certain, even though he is "fundamentally convinced" that the CCQ course "remains entirely valid in the civil law tradition of Quebec law in matters of fundamental freedom."

In addition, the researchers offer preventive solutions to the government in order to avoid litigation before the courts. They suggested that an exemption could be offered to students from religious families; that the course be purged of its religious content; or that the government amend the Education Act and protect the QCC course by using the notwithstanding clause.

Personally, Côté favours the third way since he remains convinced of the importance of teaching citizenship to high school students who will be called upon to actively participate in Quebec's democratic society in their adult lives.

In his opinion, it is necessary to help students develop their critical thinking about religion "in the light of an educational framework centered on Quebec history, culture and citizenship."

"One cannot teach the national and cultural history of Quebec without having a critical vision of religion, if only to speak, for example, of the Quiet Revolution," the lawyer argued.

He maintained that young people must be able to preserve their free will to determine by themselves if such behaviour advocated by the religion is in conformity, for example, with the male-female equality necessary for the good functioning of the society.