Quebec company wants to commercialize a robot that harvests broccoli

Quebec company wants to commercialize a robot that harvests broccoli 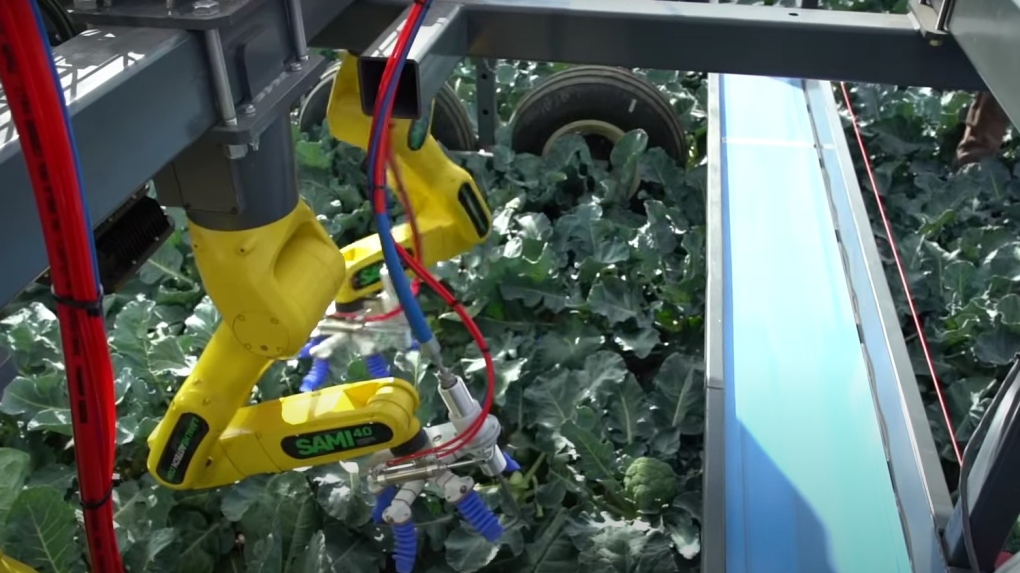 A Quebec company's development of a robot capable of picking broccoli is an example of the artificial intelligence projects the Legault government is supporting to become 'a leader in productivity' and reduce the negative impacts of the labour shortage.

Lapalme Mechanical Design is preparing to commercialize its SAMI (for système agricole multifonctionnel intelligent or intelligent multifunctional agricultural system) machine next summer. The device consists of a farm tractor pushing a machine where robotic arms are installed on both sides. These robots pick vegetables.

Tests in broccoli fields with a machine with four robotic arms have shown promising results, according to Éric Lapalme, president of the Varennes, Montérégie-based company.

Next summer, he plans to market four machines that would contain about 20 robotic arms, perhaps more if farmers express the need. Lapalme estimates that one robotic arm replaces one worker in the field.

Even if farmers manage to fill their needs with temporary foreign labour, the current system limits their opportunity for growth, the entrepreneur said.

"There are many growers who tell me they would like to expand their vegetable production and decrease their field crop production, but they can't do that because they are not able to find more labour," said Lapalme. "So, that limits the development of vegetable farms in Quebec enormously."

Quebec has given $1.3 million in financial support to the company. Investissement Québec granted a loan of $100,000.

Economy Minister Pierre Fitzgibbon said he believes that the development of SAMI is promising.

"It's a small project, but it excites me, because it's exactly what we want to do as a government," he said in an interview.

He points out that there were 194,000 jobs to be filled in Quebec at the end of the second quarter, according to the most recent data from Statistics Canada. However, 'a good portion' of these positions are at minimum wage, the minister added.

Automation projects such as SAMI would help increase productivity in the agricultural sector, Fitzgibbon hopes.

"It's a way to be a leader. On the one hand, you increase productivity. On the other hand, the jobs that are required to pick broccoli may disappear. It may sound harsh to say that, but I think it's important, because we need to reskill the workforce in higher-paying areas," he said.

Mass replacement of workers in the fields isn't in the cards, however. Lapalme Mechanical Design will limit marketing next summer to four machines to limit financial and technological risks in the early production phase.

However, Lapalme wants to accelerate the commercialization after this first phase. He points out that his machine has been patented in Canada, the United States and Europe.

"The idea is to quickly take over these three markets. We have to go quickly, otherwise the market will see what we do and be inspired by it and other ideas could emerge from that," he siad.

The company has not yet determined whether it will sell its machines or move to a rental model where the rate would vary by crop size. If sold, the cost of SAMI would vary depending on the number of robotic arms installed, Lapalme said. It would cost about $400,000 for the machine and $100,000 per robotic arm.

Right now, SAMI is only harvesting broccoli, but the machine could be used for other crops such as asparagus, celery or cabbage. It could also be used for crop inventory in the field or weeding.