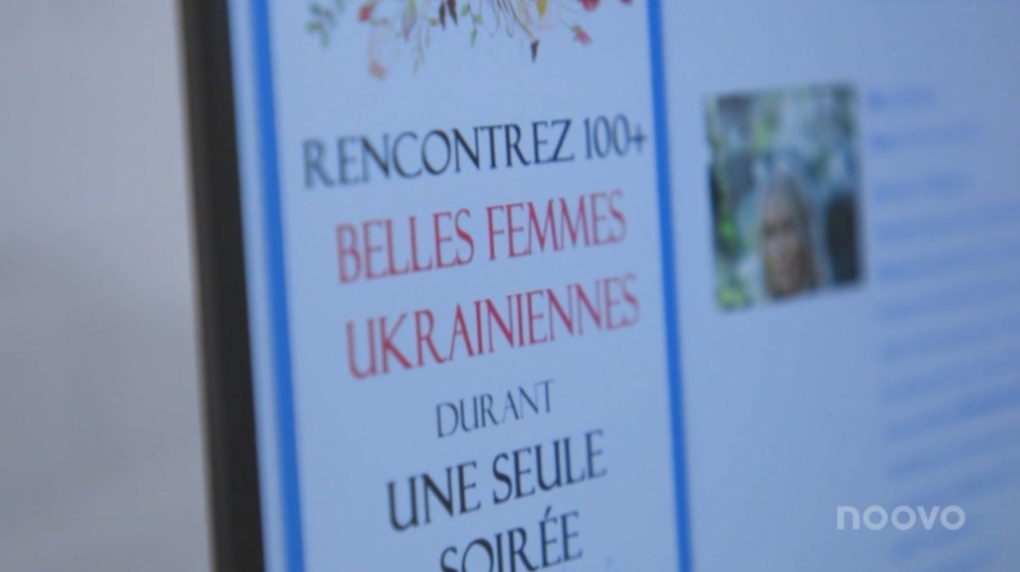 Dating sites like Ukreine.com are seeing a rise in interest from men seeking Ukrainian brides since the start of the war in Ukraine, which is raising some eyebrows. (Source: Noovo Info)

Some dating websites are seeing a surge in clients seeking companionship from Ukrainian women since the start of the war and are raising eyebrows among experts.

As first reported by Noovo Info, Quebec-based dating sites are flooded with men seeking to match up with women from Ukraine.

In the case of one website, Ukreine.com, there is even a section on their website that allows women from the war-ravaged country to connect with local men for free.

"We have a double or a triple interest on the part of men," said Dimitri Berezniakov, the founder of Ukreine.com.

"Some men also [come forward] because they want to offer help."

The website, which has offices on Montreal's Nuns' Island and in Kharkiv, Ukraine, markets itself as a "truly unique dating site."

"All of the beautiful Russian and Ukrainian women you see on our dating site have undergone a strict verification process to confirm that they’re genuine, honest and serious about starting a relationship," the website states.

A section of the website dedicated to the war said that "The vast majority of our members lived in eastern Ukraine in cities like Kharkiv, Sumy, Dnipro, Mariupol, Kherson, Nikolaev – the cities most affected by the war, that’s why the vast majority of Ukrainian women registered on our site are already in western Ukraine near the Ukrainian border or have found temporary refuge in Poland, Hungary and other border countries."

While Berezniakov acknowledged that matchmaking women fleeing war is not without risk, he said the website refers customers to Ukraine Take Shelter, which links refugees with men whose identities are verified and who are willing to provide accommodation.

Stéphane Handfield, an immigration lawyer, said he has some concerns about the trend.

"I find this worrying for these Ukrainian women of whom we know the current crisis situation in Ukraine. Could these women be tempted to do anything to leave Ukraine, thus placing themselves in a vulnerable situation?" Handfield told Noovo when asked about the websites.

France-Isabelle Langlois, director-general of Amnesty International Canada Francophone, said she is also concerned about vulnerable women putting their trust in the hands of men on the site whom they don't really know.

'The destruction is incredible': 150,000 Ontarians remain without power, says Hydro One

A Hydro One spokesperson says the storm that ripped through Ontario over the long weekend has caused significant damage across the province, and it could still be days before some power outages are restored.