SMITHERS, B.C./ MONTREAL -- Demonstrators took up residence on a CP Rail track in Rosemont Saturday afternoon, as talks continue in BC to end rail blockades across the country.

According to organizers in Montreal, their presence was part of the Nuit Blanche - Montreal's annual one night winter arts festival.

Montreal Police (SPVM) said officers were called to assist CP police at around 5:10 p.m. due to the presence of about 20 demonstrators. According to the SPVM, the latter brought "debris" and demonstrated peacefully until 7 p.m., before walking Montreal's streets. Shortly before 5 p.m., the demonstrators declared in a news release that there would be more than 100 present.

There were no arrests made.

In Kahnawake, half a dozen demonstrators are still blocking the CP Rail line Saturday while waiting to know the results of negotiations underway in British Columbia.

"The barricade will remain in place until the Wet'suwet'en chiefs tell us they are satisfied with the negotiations," said Kenneth Deer, secretary of the Mohawk Nation at Kahnawake. "What is currently happening in British Columbia could have started three weeks ago. It is worrying that we had to wait all this time." 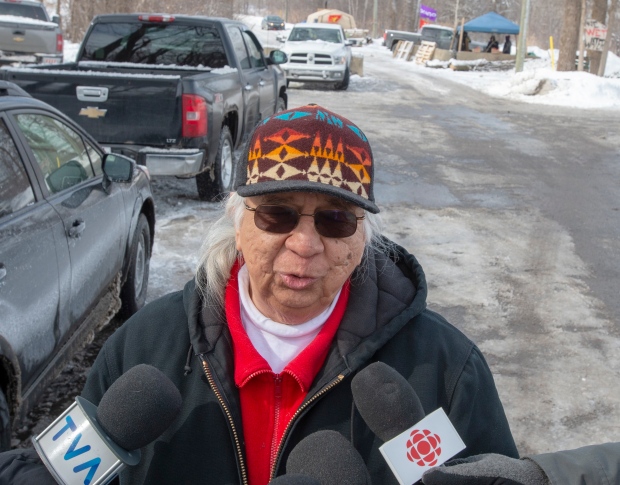 TALKS CONTINUE IN BC FOR THIRD DAY

Senior government ministers say they remain optimistic talks with the Wet'suwet'en hereditary chiefs will break an impasse over a pipeline dispute that has sparked widespread protests and transport disruptions.

In a news conference today, Bennett said the fact that the conversations are continuing is "a very good sign."

The talks began Thursday afternoon in northern B.C. and continued into late into Friday night, and another update is expected later today.

Some Wet'suwet'en hereditary chiefs are opposed to a natural gas pipeline in their traditional territory, an issue that has spurred solidarity protests and blockades across the country.

The demonstrations have disrupted passenger and freight train service over the last three weeks and police have recently moved to dismantle some of the blockades.

Via Rail said Friday that most service will be gradually restored as of Tuesday, including between Toronto, Montreal and Ottawa.

Solidarity protests and blockades have broken out across the country since the RCMP moved into Wet'suwet'en territory in northern British Columbia on Feb. 6 to enforce an injunction to stop a blockade erected by those opposed to the Coastal GasLink natural gas pipeline.

The dispute also encompasses other unsettled land rights and title issues, including who has the right to negotiate with governments and corporations, the fact that the land is not covered by a treaty and remains unceded, and a 1997 court case that recognized the hereditary chiefs' authority and the exclusive right of the Wet'suwet'en peoples to the land but did not specify the boundaries.

This report by The Canadian Press was first published on Feb. 29, 2020.