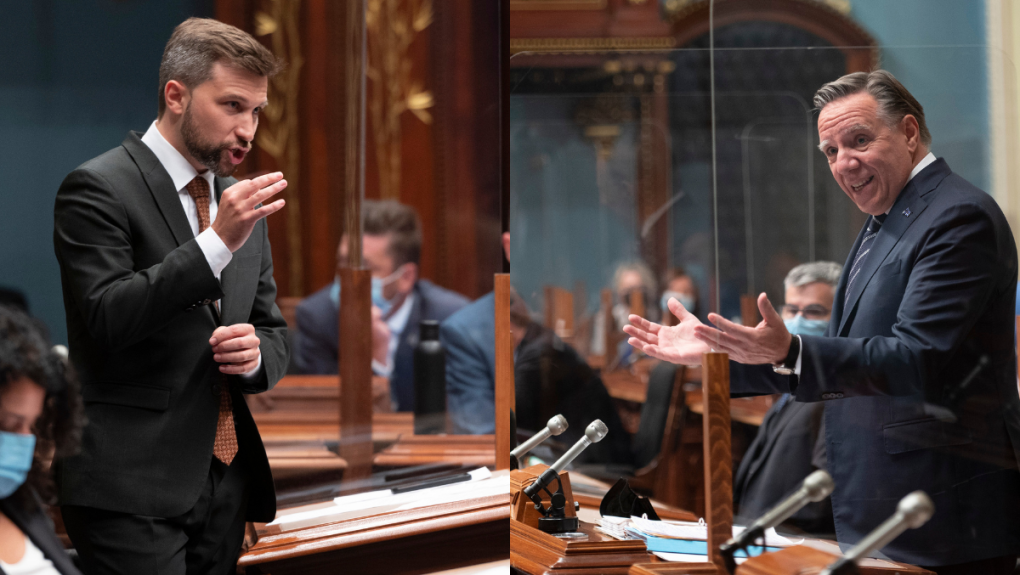 QS leader Gabriel Nadeau-Dubois compared Premier Francois Legault to Maurice Duplessis and said he was acting like a monarch, and Legault mocked the QS leader by calling him woke. (THE CANADIAN PRESS/Jacques Boissinot)
QUEBEC CITY -

The tone the premier used in the National Assembly to describe the new parliamentary leader of the second opposition party on Wednesday during question period left no doubt about the pejorative nature of the epithet chosen.

It was certainly not a compliment.

Legault was stung by the preamble of the question asked by Nadeau-Dubois, who had compared him to former Premier Maurice Duplessis.

The reply was scathing.

The term woke generally refers to people who are very vigilant in exposing social injustices and especially all forms of racism.

Nadeau-Dubois was trying to make the point that he felt the premier had recently proclaimed himself the "father of the Quebec nation" by intervening in the federal election campaign to strongly defend Quebec values, respect for jurisdictions, Bill 21 on the secularization of the state, and Bill 96 on the revision of the status of the French language in Quebec.

He reminded the premier that he had not been given a mandate by the people to "single-handedly decree what Quebec values are."

In doing so, Legault "succumbed to one of his worst faults. He has started to do his best imitation of Maurice Duplessis," said Nadeau-Dubois adding that "there are millions of people in Quebec who do not recognize themselves in him, who do not recognize themselves in his government, millions of people who are tired of him presenting himself as our saviour, then our redeemer."

When the premier called him woke, the QS MNA would not pick up the gauntlet, saying that if "the premier wants to take the debate down to the sewer, he can do it, I won't follow him."

He pointed out that the critics of Bill 21 are just as much Quebecers as those who support it.

"The premier does not have the right to symbolically expel them from the Quebec nation because they disagree with him. He is a premier, not a monarch," said Nadeau-Dubois.

The heated debate between the two elected officials quickly turned to Quebec-Ottawa relations.

Posing as a sovereignist, Nadeau-Dubois added that the bickering over federal or provincial jurisdictions did not interest him that much.

The premier took the opportunity to conclude that what "Québec Solidaire is telling us is that between now and the next referendum, come and invade our jurisdictions, we like that," said Legault.

Many trapped in Florida as Ian heads toward South Carolina

Rescue crews waded through flooded streets and used boats Thursday in a scramble to save people trapped after Hurricane Ian destroyed a cross-section of Florida and brought torrential rains that continued to fall. The destruction began to come into focus a day after Ian made landfall in Florida as one of the strongest hurricanes ever to hit to the U.S.

Hundreds of royal fans lined up outside Windsor Castle for the chance to pay their final respects to Queen Elizabeth II as the chapel where the late monarch was buried opened to the public Thursday for the first time since her death. The queen's death certificate says the 96-year-old monarch died of old age.

Quebec's immigration and labour minister claims that newcomers to the province "go to Montreal, don't work, and don't speak French," though he later tweeted he expressed "his thoughts badly."

Gas prices jumped overnight in some cities across Canada by as much as almost 20 cents.

The family of an Indigenous woman who was mocked by staff as she lay dying in a Quebec hospital in September 2020 has filed a lawsuit seeking nearly $2.7 million.

Diabetes risk twice as high for those who feel lonely: study

People who feel lonely are twice as likely to develop Type 2 diabetes, according to a new Norwegian study that analyzed data collected from more than 24,000 people over more than 20 years.

A beauty queen from Myanmar who took refuge in Thailand after criticizing her home country's ruling military junta has left Bangkok for Canada where she is expected to seek asylum.

A family doctor in Calgary has filed a human rights complaint over Ottawa's decision to no longer require masks on airplanes to prevent the spread of COVID-19.

'Patience is wearing thin,' for Maritimers who question if utilities ready for storms

Some Maritimers who lost power for days after post-tropical storm Fiona are questioning whether power utilities have properly prepared their grids for the powerful storms that are increasingly battering the region.