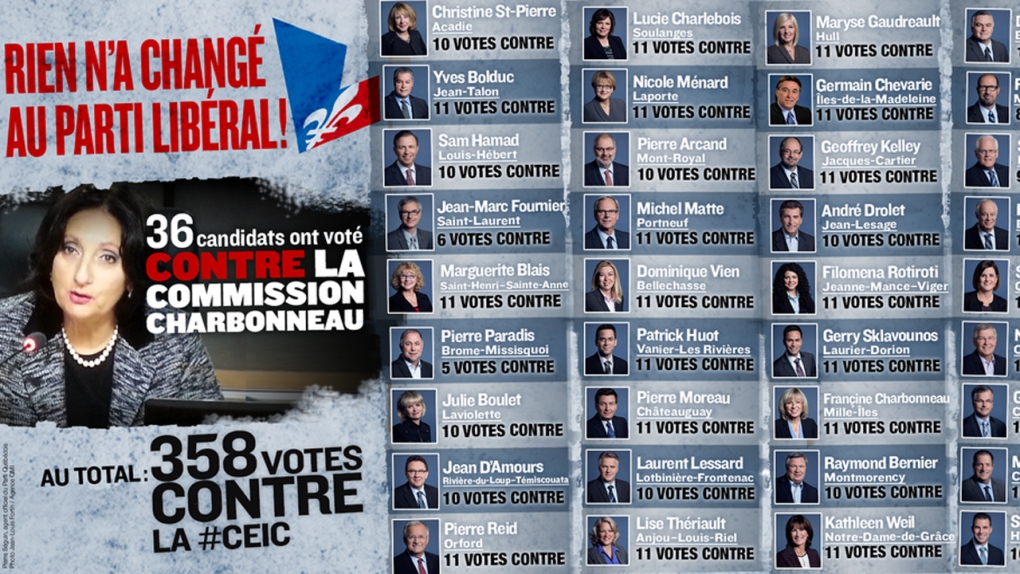 This print PQ attack ad features France Charbonneau and a list of Liberal MNAs who voted against holding a corruption inquiry.

MONTREAL - The Parti Quebecois has issued an ad that uses the head of the Charbonneau corruption inquiry to attack the integrity of the Liberals.

The online ad states nothing has changed with the Liberals and draws attention to the number of times its current crop of candidates voted against holding a corruption inquiry.

Prominently displayed on the attack ad is a photo of Justice France Charbonneau, the judge who heads the corruption commission.

Just two weeks ago, the commission insisted it was politically neutral and said it wanted to stay away from the political arena.

It decided to adjourn hearings until the day after the April 7 election rather than tackle sensitive subjects such as political party financing and contracts involving the provincial Transport Department.

Inquiry spokesman Richard Bourdon reiterated Thursday the inquiry wants to stay away from politics, but he could not say immediately if Charbonneau took issue with the advertisement or will seek a retraction.

During a news conference on Thursday, PQ candidate Bertrand St-Arnaud enumerated the scandals under the previous Liberal government and warned that any Charbonneau Commission recommendations would be shelved under the Liberals.