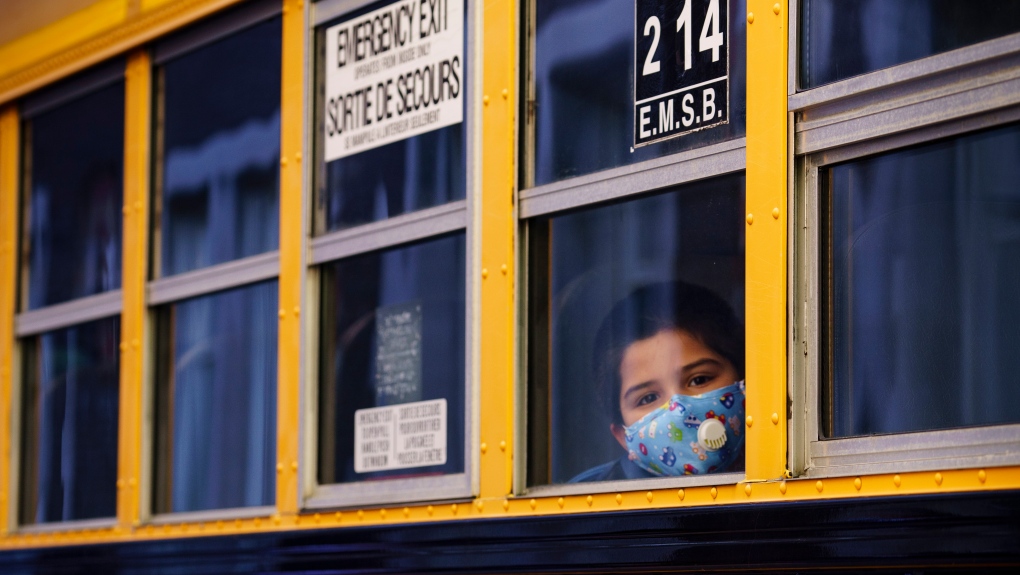 A student peers through the window of a school bus as he arrives at the Bancroft Elementary School in Montreal, on Monday, August 31, 2020. THE CANADIAN PRESS/Paul Chiasson

MONTREAL -- While members of the CSQ union in Quebec's education sector have given themselves a five-day strike mandate, teachers in the FAE are still weighing their options.

In an interview with The Canadian Press on Tuesday, the president of the Federation autonome de l’enseignment (FAE), Sylvain Mallette, said nothing is off the table, including consulting with its members on a strike mandate.

However, the FAE will only decide Thursday if it plans to run the option of a strike mandate by its members.

“I can tell you that everything is on the table,” Mallette said. “But it is clear that the government will have to take action, and we will help it to move.”

On Monday, the Centrale des syndicats du Québec (CSQ), which represents not only teachers but also education professionals and school support staff at both the elementary, secondary and college levels, said 73 per cent of its members were in favour of a five-day strike mandate, to be held at the appropriate time and not necessarily on consecutive days.

Mallette said there’s a similar dissatisfaction amongst FAE members, calling it an “almost systematic blockage'' at the negotiation tables, whether it is about the organization of tasks, access to resources, or respecting teacher autonomy.

“There is anger amongst our members,” he said.

The CSQ represents 120,000 education workers, including teachers, professionals and support staff, from preschool to college.

“When negotiations have been going on for a year, it is normal for the tensions to rise,” he said at a press conference Tuesday.

“Just before concluding, there is a kind of paroxysm,” he said, adding that he saw it as a classic example of a large negotiation in the public and parapublic sectors.

“I am confident that the acceleration of the negotiations will allow us to reach an agreement, without the strike mandate being exercised,” he said. “I too am impatient for this contract to be signed.”

Nevertheless, the FAE claims to have had around 60 meetings at the negotiation tables and 12 meetings in mediation. The mediation report was submitted on Jan. 12, and Mallette maintains, “we did not succeed in settling anything.”