At least one man was shot and suffered "significant injuries" Friday afternoon near an upscale resort complex in the Laurentians, Quebec provincial police say.

The Sûreté du Québec (SQ) said they received a 911 call around 12:45 p.m. and dispatched officers to the Estérel Resort, about 100 kilometres north of Montreal. They found one gunshot victim whose injuries were serious but not life-threatening.

Jeff Waldman, a guest who is staying at the resort with his wife for their anniversary, told CTV News he saw a large number of police officers brandishing heavy weapons after they arrived on scene at the complex on Fridolin Simard Street.

"We saw at least 10, 15 maybe more police cars blocking off the road. They were in a parking lot across the street which is I believe the parking lot to a golf course," he said.

"There were police officers walking around the premises with guns, rifles, handguns."

Waldman, who was visiting Quebec from Toronto, said police and resort management told him to stay in his room as police canvassed the building. 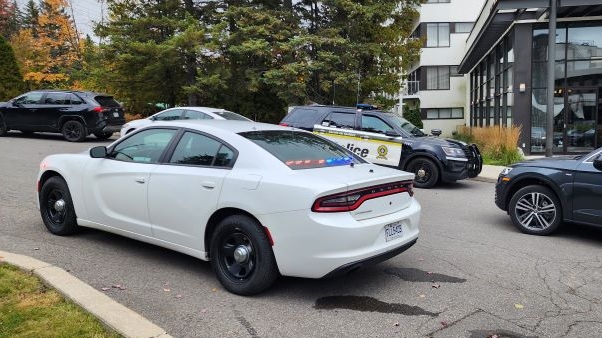 Police vehicle are parked outside the Esterel Resort after a shooting on Friday, Oct. 7, 2022. (Source: Jeff Waldman)

In an interview with the media at the scene Friday afternoon, Estérel Mayor Frank Pappas said after speaking with the police that the shooting appeared to have been a targeted attack.

Pappas said the shooting victim was not a guest at the resort, however his car was parked in the hotel parking lot and the vehicle is being analyzed by investigators.

He said he watched surveillance video footage of the events leading up to and after the shooting. He said he saw on the video a man , believed to be the victim, standing on a sidewalk near the resort and enter into a vehicle that had pulled up beside him before it drove away around 12:31 p.m.

"About three minutes later we see the same individual, dressed the same way … running across. So it seemed as though he was coming from the street here, Fridolin Simard, and entering the reception over there in a panic. So that's what I saw," he said.

"He's in hospital right now and that's all I know."

The fact that it wasn't a random shooting, he said, was reassuring to him and the community.

"It's an unfortunate incident but it's a relief for me as a mayor of the municipality."

Police have not made any arrests in the shooting and say their investigation is ongoing.

An investigation that lasted almost two years has resulted in moose hunting violation convictions for six people and a lodge in Red Lake in northwestern Ontario.