Pictures of your boss not welcome at Montreal axe-throwing facility 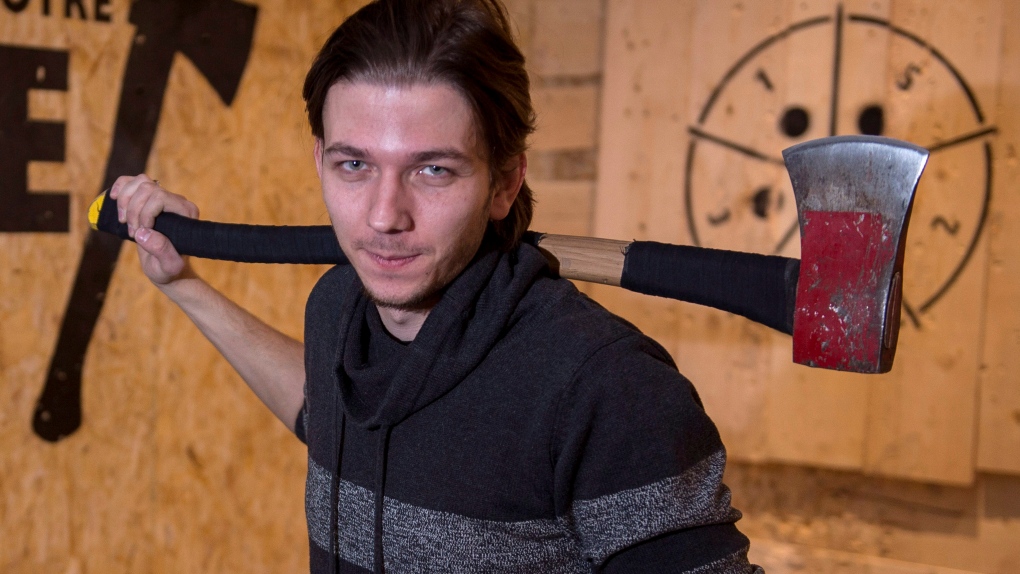 Anton Pushkari is seen at the Rage Montreal Axe Throwing Centre, in Montreal, on Tuesday, Dec. 19, 2017. (THE CANADIAN PRESS/Paul Chiasson)

Do not bring pictures of the boss.

That's what Anton Pushkar, the owner of an indoor Montreal axe-throwing facility, tells enthusiasts who may want a particular photo as their target.

"We've had people saying: 'Can I put a picture of somebody really special right on the bull's eye?"' Pushkar said in a recent interview.

"And we did have a couple of people coming in who were a little more serious about it. It's not something we want to see, but they do ask."

The appropriately named Rage Academy has 11 "throwing lanes" that are separated by steel fences. Customers entering the centre are greeted by huge lettering on the wall that reads, "Control Your Rage."

It says on its website it can accommodate up to 60 people "for every possible action from bachelor to divorce celebration."

Young professionals and students between the ages of 25 and 35 now make up about 35 per cent of his clientele.

The Siberian-born Pushkar said a lot of singles come in to try their hand.

"You would be surprised, but often the girls get the hang of it much quicker than the guys," he added.

Three different sizes of the steel hatchets are available for players, including one for two-handed tossing.

Kids are allowed to try the activity -- if they are able to safely throw a specially made small axe.

"We've had 10-year-olds who were throwing better than their adult parents," said Pushkar, adding that even people in their 80s have come in for target practice.

Roger Beaudoin, 96, who used to compete in lumberjack festivals, has also paid a visit.

He took first place in several axe-throwing competitions around Quebec.

But Beaudoin, who still tosses around an axe in his backyard in the village of Sainte-Emelie-de-l'Energie, says "all good things come to an end."

"I don't have the capacity to be as accurate as I used to be, but I hit the target a few times," he said in an interview with The Canadian Press.

Pushkar, who came to Montreal from central Russia with his parents 14 years ago, said all activities at his venue are supervised by instructors who also provide training.

He stressed that alcohol consumption is not allowed and that inebriated clients who come in are told to "get some fresh air and come back later."

"So far, here at Rage we've had no accidents involving axes," Pushkar said.

But some people end up cutting their fingers when they try to see how sharp the axe is.

"Band-Aids are our biggest expense in terms of safety," Pushkar joked.

It costs a total of $40 per target per hour for three people, Monday to Thursday, and $50 on weekends.

There are also special group rates.

For serious competitors, there's the Toronto-based National Axe Throwing Federation, whose members are from Canada, the United States, Australia and Poland.

The federation, which was established in 2016, represents the sport of axe-throwing on behalf of 17 member organizations with more than 3,000 members in 39 cities.

Commissioner Matt Wilson says one major tournament is held every year in February in Toronto.

"The first stage of the tournament happens across all organizations that are part of the NATF," he said in an interview.

"The top 128 people then make it to the final day of the Toronto tournament."

Wilson also owns "B.A.T.L - Backyard Axe Throwing League," which has been around for 11 years.