Paying for words: How much is Obama worth to Montreal? 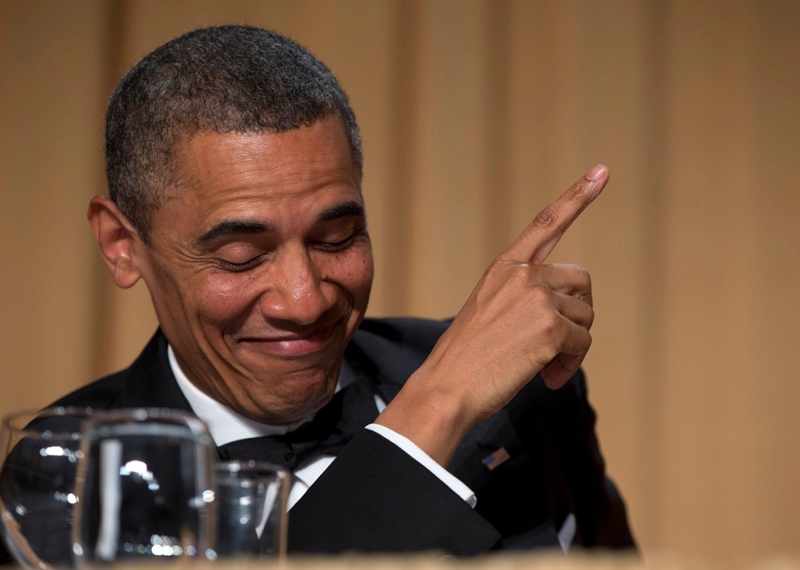 Barack Obama is coming to Montreal, after a temporary reprieve from the public eye following his departure from the presidential office earlier this year.

After returning from an extended post-presidential vacation in French Polynesia, some rapt enthusiasts joked about Obama’s re-emergence as a street style star after he was spotted wearing streamlined suits with an unbuttoned shirt.

Feels like every time we see Obama, he loses another button. Here’s him in January vs. last week vs. today pic.twitter.com/13R5zKyMW1

After all, the former U.S. president will be returning to the speaking circuit to deliver a speech to the Montreal Chamber of Commerce on June 6, as part of a four week block of public appearances.

The Chamber of Commerce said it made a special effort to bring in international leaders in conjunction with Montreal's 375th anniversary.

“President Obama is one of those people who mark history and inspire youth around the world,” Michel Leblanc, president of Montreal Chamber of Commerce, said in a statement Wednesday. “[He] contributes to the building of an egalitarian society based on freedom, hope, and optimism”

Previous U.S. presidents to address the Montreal Board of Trade include Bill Clinton and George W. Bush, as well as diplomats like Tony Blair and Mikhail Gorbachev.

However, the Chamber of Commerce did not immediately respond to an inquiry about how much Obama will be paid for his appearance.

When Obama left the Oval office, there was some speculation over what the former president would be earning.

Along with an annual presidential pension of $205,700, Time Magazine reports that Obama receives an additional $383,535 in state pension from Illinois.

Due to a contradiction in policy, the UK Telegraph reports that Congress may try to revoke his retirement funds.

While in the White House, Obama vetoed a bill that would restrict former presidents from receiving their allocated pension, should they accept large sums of money from an outside source.

After accepting a reported $400,000 last month by Wall Street firm Cantor Fitzgerald – nearly twice the amount paid to Hillary Clinton in 2013—Obama effectively gives Republican sponsors of the bill reason to try to revive it.

This is not the only speaking engagement that the former president will be cashing in on.

In fact, Obama, along with wife Michelle, recently signed to the Harry Walker agency –- which touts clients like Bill and Hillary Clinton, and pilot Chesley B. “Sully” Sullenberger – to manage his public speaking appearances.

The power couple also signed a $65-million deal with Penguin Random House back in February, for two separately-penned books.

Public appearances by Michelle alone usually earn her $200,000— half of what her husband earns.

On Tuesday, the UK Express reported that Obama’s speech at Seed and Chips – a global food summit in Milan – earned him $2.5 million USD, although no official source was cited. Express also alleges that the Obamas took up residence in the Park Hyatt hotel, which charges nearly $8,000 a night, and travelled with a convoy of 14 cars, a helicopter, and a 300-strong police escort.

The Times reports that the same speech raised nearly $3.26 million USD (an average of 850 Euros per ticket), which was then donated to a personal foundation.

Obama was last in Canada last year, when he visited Ottawa during a state visit.

While the Chamber of Commerce website lists tickets to the event at a starting price of $50, there's no word as to whether the proceeds will be funnelled to a charitable foundation.

What’s it all worth?

It’s not uncommon for former presidents to be paid for their time and pearls of political and social wisdom. In fact, Gerald Ford was the first to give a paid speech, charging upwards of $40,000 per appearance after leaving office in 1977.

Other presidents, like Harry Truman, rejected the notion of being compensated for one’s time, once stating that the practice was “exploitative.”

Tax records and published reports indicate that former presidents rake in tens of millions of dollars just by working the speaking circuit.

Assuming that Obama continues to accept speaking gigs that pay in the six figures, he will be tied with Bill Clinton for the position of highest-earning former president.

Clinton has made the most of any modern former president on the speaking circuit—giving dozens of speeches a year, earning between $250,000 and $500,000 each.

The 43rd president of the United States, George W. Bush, has purportedly made over 200 public appearances since leaving the office— earning him nearly $20 million in outside revenue.

Bush told author Robert Draper that his father, George H.W. Bush, made approximately $50,000 to $75,000 per speech—despite the fact that the older Bush was open about his dislike of speaking in public.

Jimmy Carter is the living former president who makes the least amount of money per engagement. While he seldom accepts speaking fees, according to an Associated Press report in 2002, when he does, Carter donates the $50,000 proceeds to a charitable foundation. He has also restricted his speaking topics to areas like healthcare, retirement and government.

Current U.S. President Donald Trump holds the record for the most expensive speech ever given. In 2006, Trump earned a staggering $1.5 million per speech (and he gave 17) at the Learning Annex’s real estate seminar.

If you didn't buy a ticket but want to watch the speech live (and for free!), you can livestream it Tuesday June 6 at 5:30 p.m. on our website.