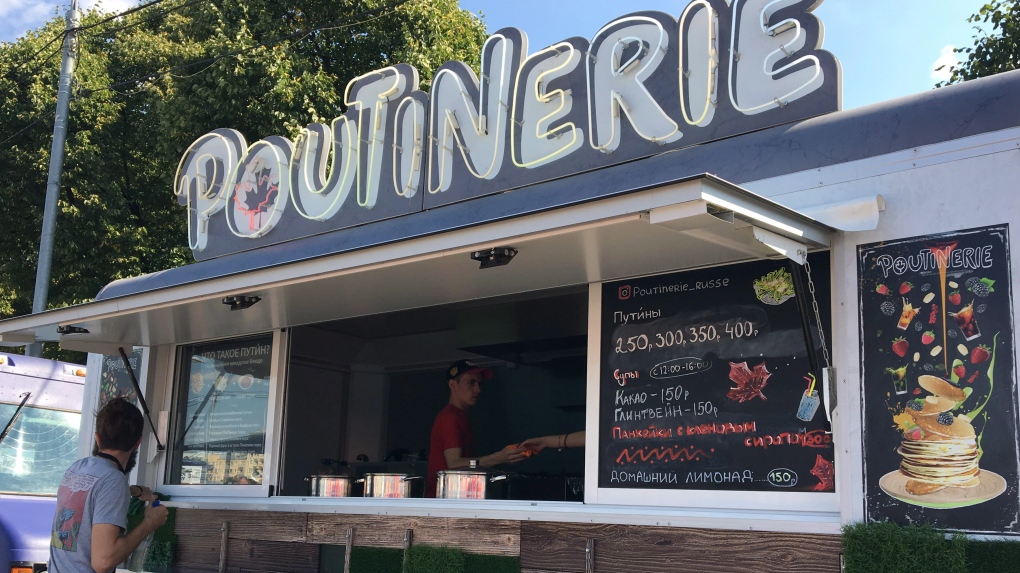 Masha Klimova and Alexei Kolesov have spent more than a year driving around in their food truck to serve their fellow Russians heaping helpings of a hearty Quebec staple.

They've been testing their own twist on the French Canadian comfort food since opening up Poutinerie in 2017, finding what they describe as "a young, dynamic target audience that is open to new experiences," as they drove from festival to festival perfecting the menu.

As the couple and business partners plan to open their first stand-alone restaurant later this year in Moscow, they found were clients hot for the grub, even if formal relations between Russia and Canada remain decidedly cold.

The couple have garnered more and more attention online in recent months, and said they'd welcome a culinary ally from Quebec or elsewhere in Canada who could provide the one essential ingredient that's been missing: those elusive, squeaky cheese curds.

"At the moment, the main problem is the cheese curd, which simply doesn't exist in Russia," said Klimova in an email interview. "No cheesemaker ... could exactly repeat this cheese for us.

"We invite all Canadian chefs who are interested to come here and help us master the product to make a version that is most faithful to the original."

Passionate about food, the couple has always liked the idea of opening their own restaurant, and have adapted the Quebec favourite -- french fries, cheese curds and gravy -- for the Russian pallet.

Klimova said at the top of the list among the local clientele is a version garnished with bacon, blue cheese sauce, pear and crispy onion.

"The most courageous opt for the poutine with crab, coconut sauce and lime," Klimova added, calling it "a cool combination, but not for all."

Her personal favourite -- the one she says is best adapted for the Russian market -- is the Stroganoff: beef with mushrooms in sour cream sauce and lightly salted cucumber.

"It looks like a homemade, native dish," she said.

Reviews of the couple's take on the Quebec classic have included some clients from Toronto, Montreal and Quebec City who've offered their thoughts, leading to a continual improvement of the product.

For Russian clientele, many are surprised to discover that Russian President Vladimir Putin has a dish that bears his name -- as Putin translates to Poutine in French.

"Everyday, we respond to guests who say: 'What? What is Putin? Putin is a dish with fries in Canada?," Klimova said.

For some, the name is difficult to digest.

"Some in the minority react negatively and they blame us for making fun of the president," she said. "On the other hand, it is only a minority of people."

Klimova said for all the political disagreement between Moscow and the West, the one thing that ties the two sides together is the almighty potato. She figured Russians would enjoy the mix of ingredients.

"In the United States, Canada, Belgium and many other places, people like potatoes a lot," she said. "Russia is no exception."

Klimova, 25, studied journalism at the University of Moscow before embarking on her restaurant career. She was introduced to poutine while studying French in high school at Saratov, about 700 kilometres southeast of the Russian capital.

The optional course included a discussion on Quebec culture. She also tried the dish during a visit to France.

"But I know the best poutine is only in Quebec."