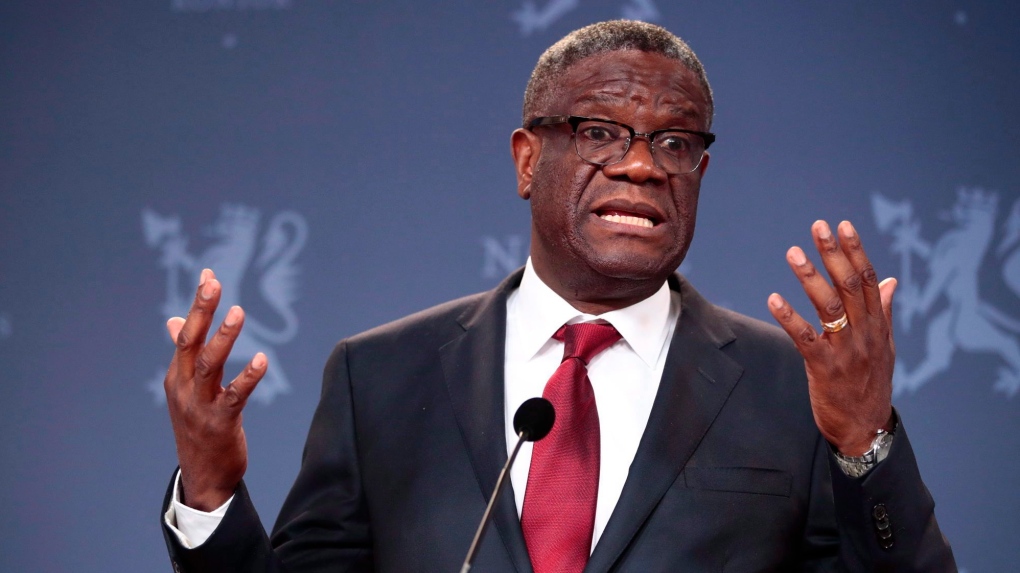 Nobel Peace Prize winner Dr. Denis Mukwege said Friday that rape in armed conflict is a "weapon of mass destruction," the effects of which are felt for generations.

In an interview with The Canadian Press during a visit to Montreal, the Congolese obstetrician and gynecologist lamented the fact that the world does not want to recognize and adequately punish the weapon of sexual violence.

Nicknamed "the man who mends women," he long ago stopped counting the number of tortured and mutilated women who have come for treatment at his clinic in the Democratic Republic of Congo.

He encourages women to talk about what they have experienced so the perpetrators can held responsible for their crimes -- but also so victims can free themselves from their suffering.

"Not breaking the silence means that they carry the burden of silence," he said. "When we do not talk, it does not mean that we do not suffer."

His experience is that women who have broken the silence have the ability to start a new life. Talking gives them strength, he says, noting that women around the world are victims of such violence.

He also wants communities to support women who have the courage to speak. These women "whose bodies have been used as battlefields" should not be stigmatized, he insists.

His testimony of the horrors he has witnessed is chilling. He said he recently cared for a six-month-old baby, raped by an adult. The violence continues, "but the world has decided to close their eyes and ears," he said.

The 2018 Nobel Peace Prize has given him more visibility, which he uses to bring attention to the cause wherever he can. He shared the award with Nadia Murad, a Yazidi survivor of rape and captivity by Islamic State militants.

On Friday, the Universite de Montreal awarded him an honorary doctorate, and he signed a partnership agreement between the university and the Panzi Foundation, of which he is chairman of the board. The collaboration agreement will involve the participation of five university faculties in exchanges and research and training projects.

The university says it will use its expertise in training and research to support Mukwege's support for victims of sexual violence.

After the 1996 destruction of the hospital in Lemera during the first Congo war, Mukwege founded, with the help of a Swedish charity, the Panzi Hospital in Bukavu in 1999. He still works there as a physician.

The hospital provides medical, psychological and social care for women who are victims of sexual violence. In addition to his work at the hospital, Mukwege has gained international recognition by advocating for victims.

He said he sees it as his mission to make their voices heard, and to bring attention to the conflict in the Congo that has left an estimated six million people dead, four million displaced and hundreds of thousands of women raped.

"Give your voice to the voiceless," he said. "You who are in a democracy, whose voices can be listened to by your leaders, tell them that what is happening in the DRC is simply humanly unacceptable. Ask them to commit to the peace process. Go carry our voice.

"Peace is what these women want."