Next Canadian astronauts could be flying commercial 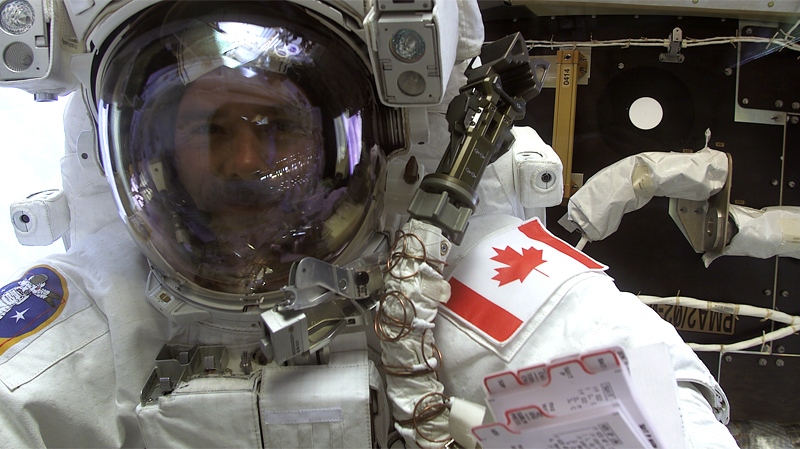 Canadian Space Agency Astronaut Chris Hadfield, STS-100 mission specialist, peers into the crew cabin of the Space Shuttle Endeavour during a lengthy spacewalk to install Canadarm2 on the International Space Station in 2001. (NASA)

MONTREAL--The next Canadian to travel to space might be making the journey on a commercial flight instead of through the national space agency.

A former Manitoba bush pilot, an ex-Snowbirds pilot, and two other space enthusiasts are among the possible candidates to become the next Canadian to leave the planet.

There are currently no scheduled flights of Canadian astronauts beyond Chris Hadfield, who completes a five-month visit to the International Space Station in May.

An official with the Canadian Space Agency said it's still possible the federal body might send one more astronaut up to the space station before the end of the decade.

Jean-Claude Piedboeuf, the CSA's acting director-general of space exploration, said in an email that the agency is still talking to NASA about getting an additional long-duration flight before 2020. Canada has confirmed its participation in the International Space Station up to 2020.

In the meantime, though, commercial space opportunities are opening up.

Several private companies, like Sir Richard Branson's Virgin Galactic, are hoping to begin suborbital space tourism by the end of the 2013. A trip from a spaceport in New Mexico costs $200,000 per person.

The arrival of space tourism and other commercial operations will present opportunities for a number of Canadians who are eager -- and qualified -- to fly beyond the Earth's atmosphere.

SpaceX, a private company, hopes to ship astronauts up to the space station in its Dragon spacecraft in a few years. The vessel, which is blasted into space atop a rocket, has already shipped supplies up to the orbiting crew.

Rob Bendall, a former bush pilot from Winnipeg who works for Branson's Virgin America airline, might have the right stuff to fly in space.

The 48-year-old Bendall, who is also a test pilot, met the people at Virgin Galactic while working in Reno, Nev.

Bendall has already trained to fly on Virgin Galactic's suborbital flights, which would send a rocket plane with six tourists into space.

After being launched from a mother ship, the two-piloted space plane would take tourists about 110 kilometres above Earth, where they would briefly experience weightlessness.

Bendall, whose father was an Air Canada pilot, has been evaluated in simulators to fly both space vehicles.

"It's great to be considered and it's fun to be involved (and) I hope for the best that these projects will move along and I'll be involved when it's time to go."

Bendall predicted that the commercial space sector will open the door to skilled Canadian pilots, who could perform a variety of tasks such as bringing payloads into space.

"Canadian pilot licences are very, very recognized and honoured around the world," he said. "These guys will get opportunities that they would never get otherwise."

He has applied twice to become a CSA astronaut, but wasn't chosen. The 48-year-old Seedhouse is currently a member of Astronauts4Hire, an organization that trains commercial astronauts.

Two Canadians are among its group of about 20 trained individuals, who also come from the U.S. and Europe and speak 16 languages among them.

Seedhouse knows that Virgin Galactic and XCor will use their own "in-house" employees to fly their space vehicles, but he's confident there will also be work for his group.

He pointed out that, in addition to tourists, the two companies also plan to transport science experiments for universities and researchers.

"There are plenty of people who have no inclination to be an astronaut, but they still want their payloads flown and that's where Astronauts4Hire comes in," Seedhouse said.

The pilot, triathlete and skydiver predicted that "as the industry develops," his colleagues would be hired out as space pilots.

Seedhouse even suggested that Hadfield might want to fly a suborbital spaceship someday.

The 53-year-old Hadfield didn't rule that out, when asked about the possibility of becoming a commercial space pilot in a recent interview before he left for the space station.

Kris Lehnhardt, the other Canadian member of Astronauts4Hire, also applied to the Canadian Space Agency, but missed the cut in the last round.

In that last call for applications, the agency received over 5,300 submissions and rookie astronauts Jeremy Hansen and David Saint-Jacques were picked in 2009.

Lehnhardt, 36, who was born in Toronto and raised in the Ottawa Valley, now teaches at George Washington University in Washington, D.C.

A qualified doctor who has trained with flight surgeons at the Kennedy Space Center in Houston, Lehnhardt is even ready to be a guinea pig in space.

"Not only would we be potentially good research projects, but we can also be the ones who perform the research," Lehnhardt said, adding that his ultimate goal has always been to become an astronaut.

"Many people who are passionate about spaceflight realize that, with these commercial companies coming online, there is an entirely new area that we can pursue and try to get into space."