A Quebecer has been nominated for an Academy Award for his work in 'The Whale.'

Adrien Morot is among the nominations for the 95th Academy Awards for Best Makeup and Hairstyling. He, alongside Judy Chin and Anne Marie Bradley, transformed actor Brendan Fraser into a morbidly obese English teacher.

Morot told CTV News that the nomination was "bittersweet" as he wished more of the team were included on the ticket.

"I'm glad that we're there, [but] I think that there are important people that contributed to the makeup - like Kathy Tse was super involved in building the suit and helping put on the makeup - so people are left out of the nominees," he said. "It's very political. So I'm happy, but I'd like to see more of our team on the final ticket." 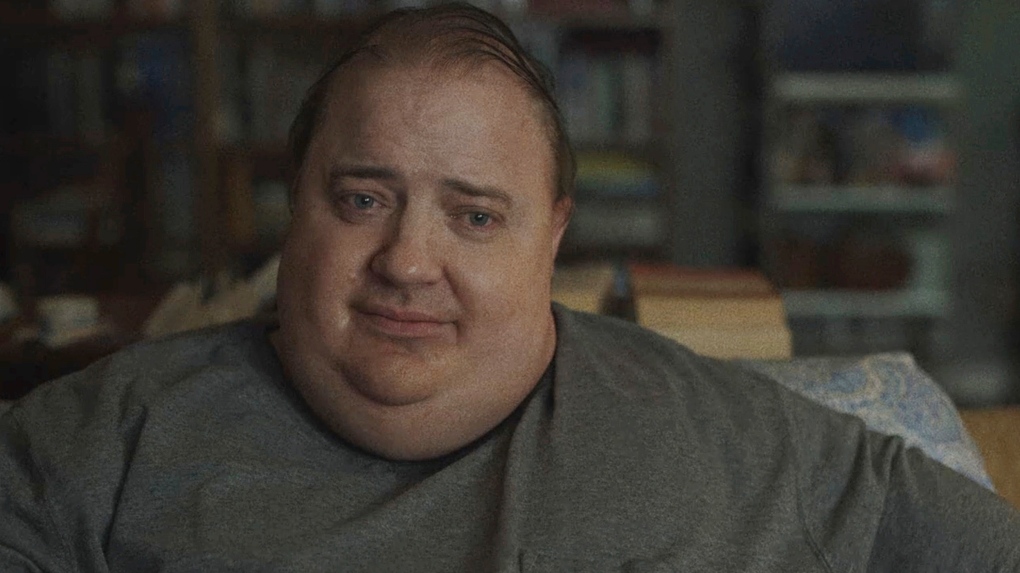 This image released by A24 shows Brendan Fraser in a scene from "The Whale." (A24 via AP)

It is the fifth time Morot has worked with director Darren Aronovsky, the acclaimed director of such films as Mother!, The Fountain, The Wrestler and Requiem For a Dream. Morot knows the director is, like himself, a perfectionist and very demanding.

"I've heard him saying that if he wasn't a director, he'd be a baseball umpire," said Morot. "He sees everything, he doesn't let anything pass that's not up to his standards, so when the phone rings and I see his phone number, I'm always like, 'Oh boy. What am I getting into now?"

If Arronovsky has high standards, so does Morot. Just ask him what he thinks of his work and it becomes immediately clear.

"I'm the worst person to ask; I hate everything I do," said Morot. "I went to the New York premiere and I was like, 'I'm a complete failure.' I was like, 'How did I miss this? Oh my God! Look at the corner of the mouth.' I can't watch."

It is Morot's second Oscar nomination after he was recognized for his work on 2010's Barney's Version. He won a Genie Award for the film in addition to a Jutra.

Morot has already won the Critics Association of Central Florida and North Dakota Film Society awards for The Whale.

Morot said getting accolades like Academy Award nominations helps shine a light on the talent in Montreal.

"When you have movies like that, that break through the crowd and get international accolades, for sure it makes it makes producers who come to shoot into town a bit more confident about local talent," he said.

If producers know the talent exists in Montreal, Morot said, they may not bring along a team from California.

"Internationally recognized accolades like the Oscars or BAFTA, for example, for individual work residing in Montreal helps put it on the map and ensure that they will go with local people more than just hiring people from out of town. Right off the bat, so it's always good."

Are video games good for kids' brains or bad for them? New research suggests the answer is 'neither'

A small new study has found that neither the frequency of daily gaming reported by pre-teen children nor the specific video game genres they chose to play were linked with their performance on a standardized cognitive tests.

Canada deployed a disaster assessment team to Turkey on Wednesday in the wake of a devastating earthquake that's killed thousands, as the federal government faced criticism that the window to help with rescue efforts was closing.

Two four-year-old children are dead and a man has been charged with first-degree murder after a driver crashed a city bus into a daycare in Laval, Que. Wednesday morning. The driver, 51-year-old Pierre Ny St-Amand, was arrested at the scene and faces two counts of first-degree murder and several other charges.

Alphabet Inc. lost US$100 billion in market value on Wednesday after its new chatbot shared inaccurate information in a promotional video and a company event failed to dazzle, feeding worries that the Google parent is losing ground to rival Microsoft.

Indigo's payment systems and online store are down after a 'cybersecurity incident,' the company announced on Wednesday evening.