The city of Montreal will add 26 km of bike lanes over the next two years as part of its plan to make bicycling safer.

The lanes added in the next two years will be along five axes in the core of the city, and will eventually connect to one another in what the city is calling the Express Bicycle Network, or REV (Reseau Express Velo).

In several years Montreal hopes to have 17 separate bike routes that will span 184 km of streets, from the eastern tip of the island to the West Island.

In all cases these lanes will consist of two lanes for bicycles and will be somewhat isolated from car traffic, being separated by a concrete curb and a row of parked cars, or in quieter areas by paint and bollards.

"Ultimately if we want to have more people using their bikes, if we want to have less people in their cars in the city, well ultimately we need to do the changes that are necessary. We always have in mind this cohabitation, how do we coexist together?" said Mayor Valerie Plante.

Mayor Plante said that people should get used to roads in their current arrangement being rearranged.

That means lanes primarily used by cars would be shifted, new bike-only lanes added, and that in many cases lanes of street parking would be removed. Plante said there are no estimates yet on how many parking spots may be lost.

"We're not using the REV to take some parking off, but if it's necessary, we're doing it,"  she said.

"We're gaining very wide sidewalks in the parts of the city where there's thousands and thousands of pedestrians," she said.

The first five axes will be: 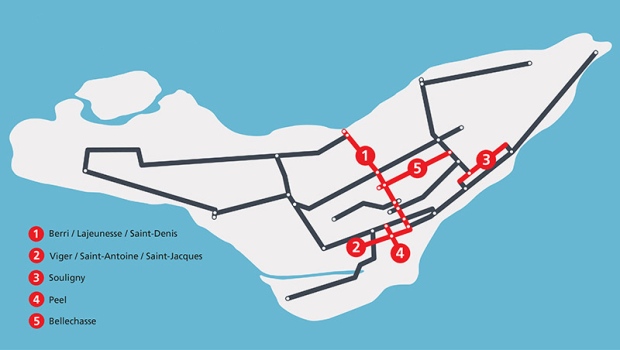 The plan for the REV was subject to public consultations last year and received favourable input from a host of groups, including multiple post-secondary schools, CAA-Quebec, and the Quebec Trucking Association.

The trucking association said anything that can be done to make cycling safer should be encouraged especially since cyclists die every year in collisions with heavy trucks.

Giguere said other than the bike lanes, some other changes could be made to roads to make them safer for cyclists.

"The cycle of the lights are very, very important. To have reserved phase for cyclists or reserved phases for people making turns in their cars," she said. "To have the stop line a little back so when people are stopped in their cars, the cyclists will be a little bit ahead so the drivers see them and there's no way they're going to make a right turn without seeing them," she said.

Montreal's administration hopes that in ten years 15 percent of all commuting is done via bicycle.