Michael Applebaum announced his resignation as mayor of Montreal Tuesday afternoon, a move that comes just one day after he was arrested on corruption and conspiracy charges.

Applebaum said he was stepping down during a brief news conference, where he maintained the accusations against him are false.

“I have a profound conviction that I have always worked in the best interest of Montrealers,” he said. “I will do everything I can to prove the accusations against me are unfounded.”

He added that he will be putting his energy into his defence and his family. The former mayor has hired well-known defence attorney Marcel Danis, who is a former Conservative Member of Parliament and served as a cabinet minister for former prime minister Brian Mulroney.

“I cannot comment on the different accusations and the different rumours, but I have every intention of continuing to fight,” he said. “I want to be clear that I’ve never taken a penny from anybody.”

Applebaum acknowledged that seven months ago he campaigned on a promise to clean up city hall.

“I understand (Montrealers’) frustration and their cynicism with the political climate of the last few years,” he said. “I swore that I would erase the stains from the reputation of our city, that I would do everything to protect it, and in the last few months, I have accomplished a lot to put Montreal back on the right track.”

Still, Applebaum said that resigning was the “responsible thing to do” amid the ongoing police investigation.

He did not take any questions after his statement.

A number of Applebaum's former allies, along with Quebec Premier Pauline Marois, had called for his immediate resignation after the interim mayor was arrested early Monday morning. He faces 14 charges, including fraud, conspiracy, breach of trust, and corruption in municipal affairs.

"What happened yesterday gives a clear signal to anyone in municipal affairs anywhere in Quebec that if they believe that if they can have a career with skeletons in their closet. they are wrong. There are people working very hard to find these past problems and they will be found," he said.

Applebaum's resignation will likely affect whether early mayoral elections are held, or if another interim mayor is selected to replace him.

He had already said he will not run in the upcoming municipal election set for November.

Meantime, opposition parties at city hall were quick to tout their qualities for the upcoming election.

“We can take our responsibilities and be sure to offer to Montreal this stability,” said Vision Montreal leader Louise Harel.

“With the resignation of Mr. Applebaum, we have left Montrealers all together a new step in the horror show of Union Montreal,” said Projet Montreal leader Richard Bergeron. “I hope it will be the last one.”

The charges, investigators said, are related to two real-estate projects that took place in the Cote-des-Neiges-Notre-Dame-de-Grace borough between 2006 and 2011, before Applebaum became mayor.

"These were bribes that influenced a decision, approvals or permit distribution," Unite permanente anticorruption commissioner Robert Lafreniere said at a press conference announcing the arrests Monday.

Police said the transactions being investigated were worth "several hundreds of thousands of dollars."

Questions swirled Tuesday about what is behind Applebaum’s arrest. The alleged crime involved two sites in his former borough.

Engineering firm Dessau confirmed Tuesday that one of the sites was the NDG sports centre, which opened to great fanfare in 2011, and was a source of pride for Applebaum.

“The sports centre was supposed to be centrepiece and really a legacy for him,” said community activist Jason Hughes.

Also named in the warrant were businessmen Robert Stein and Anthony Keeler, who were listed as associates.

In 2010, the Stein family sold land near Mount Royal to Onyx Condominiums for $3 million. The following year, an old building on the land was demolished to build a new condo project.

No one from Stein's company, Eagle investments, answered the door or returned calls requesting an interview.

UQAM urban planning professor David Hanna calls it the tip of the iceberg.

“It is absolutely no surprise to me that Michael Applebaum is in deep trouble today,” said Hanna, who acted as a whistleblower, submitting files to the Charbonneau Commission on two projects.

He questions the profitable land flip at what's now the Vista Seniors’ Home on Cote-Saint-Luc Rd. and a zoning change that allowed a developer with Mafia connections to build  condos on Upper Lachine Rd.

“(There were) massive violations of urban planning law in both of those projects,” he alleged.

There have been no charges relating to those projects.

Who will take over?

Some names are being floated around for the position of the third mayor in a year, including Saint-Laurent borough Mayor Alan Desousa and Cote-des-Neiges councillor Helen Fotopolous.

Some councillors would like to see one person endorsed by everyone, while others are asking for an election. All agree the city needs someone who steer the city until the elections.

Lionel Perez, the current CDN-NDG borough mayor, said any new mayor needs to put a fresh face on the city.

Candidates interested in the role can give their names Wednesday through Friday.

Two other Montreal-area public figures were also arrested Monday: Jean Yves Bisson, a former director of permits who worked in Applebaum's west end borough, and Saulie Zajdel, who worked in a ministerial office for the federal Conservatives on ethnic outreach. Zajdel was charged with breach of trust, fraud and corruption.

Applebaum was elected interim mayor of Montreal after former mayor Gerald Tremblay resigned when a witness at a corruption inquiry said he turned a blind eye to illegal financing in his now-defunct political party.

Montreal city hall was raided by UPAC investigators last February, in a sweep that also targeted municipal offices in various boroughs of the city -- including the one Applebaum represented as a councillor for many years.

Gilles Vaillancourt, the former long-time mayor of nearby Laval, was also arrested in a sweep last month and charged with fraud and gangsterism.

With a report from CTV Montreal 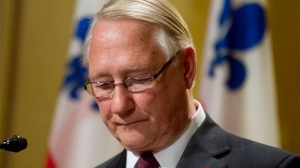 Political figures in the Montreal scandal 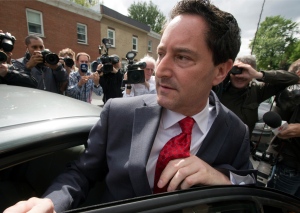