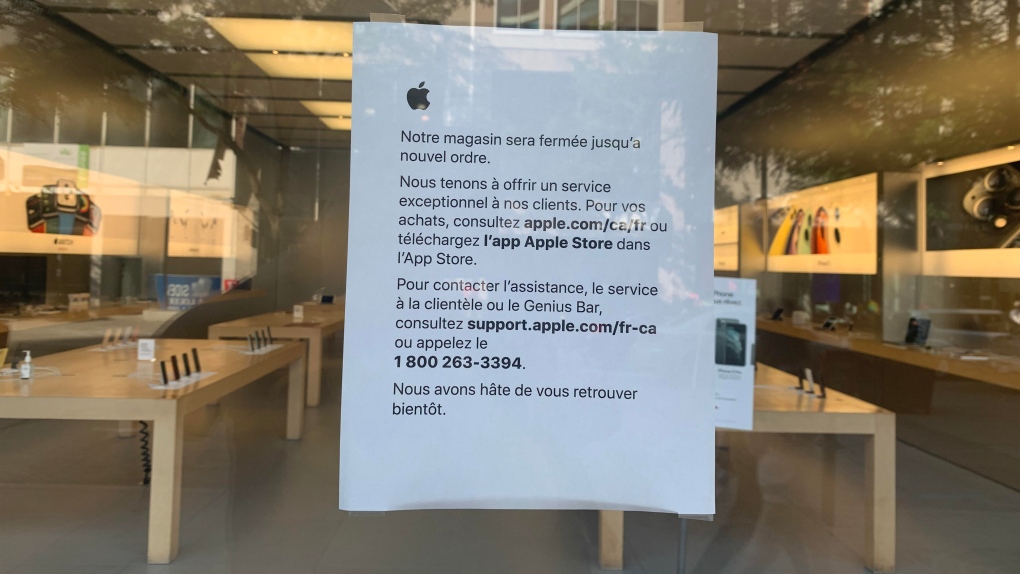 A sign on the front door of the downtown Montreal Apple Store on Aug. 10, 2020 (Photo/Daniel J. Rowe)

A sign on the front of the downtown store simply says it's "closed until further notice" and looks forward to reopening soon. The same information is repeated in the store's voicemail message.

In an email to CTV News, the company would not confirm if there was an outbreak of COVID-19 at the store, but said that "due to current COVID-19 conditions in some of the communities we serve, we are temporarily closing stores in these areas."

Apple said "we take this step with an abundance of caution as we closely monitor the situation and we look forward to having our teams and customers back as soon as possible."

A customer who brought in a computer for repairs on Thursday told CTV News she was told it would take between 24 hours and 10 days to be fixed – but a day later, was asked to pick up her laptop from the store before 5 p.m. the following day, as otherwise it would remain with Apple until the store reopened.

The customer says she asked an Apple employee if there had been a positive case of COVID-19 at the store, but the person wouldn’t confirm it.

If that's the case, the customer says she's uneasy at the idea clients aren't being told.

"The main issue here is that if stores... are not going to be community-minded and reveal the truth, they should be called out on it. It's really bad for their public image," the customer said.