MONTREAL -- The rules around uniforms for Montreal police officers are under scrutiny after some were seen in recent weeks wearing controversial "thin blue line" patches -- a symbol some other police forces in Canada have banned.

In response to questions from CTV News, Montreal police said they are currently in the process of a "complete review" of the dress code for their officers. But they're staying tight-lipped on when the process started and how many officers have modified their uniforms.

"This review includes the eventual positioning of the wearing of any insignia, including the ‘thin blue line,'" the police service wrote in an email Friday morning.

"As such, it is still early days and we will not comment further."

The police service did not respond to other questions, including how many officers have been wearing the symbol or if any have been disciplined.

The patch in question features a blue line crossing through the blackened Canadian flag. 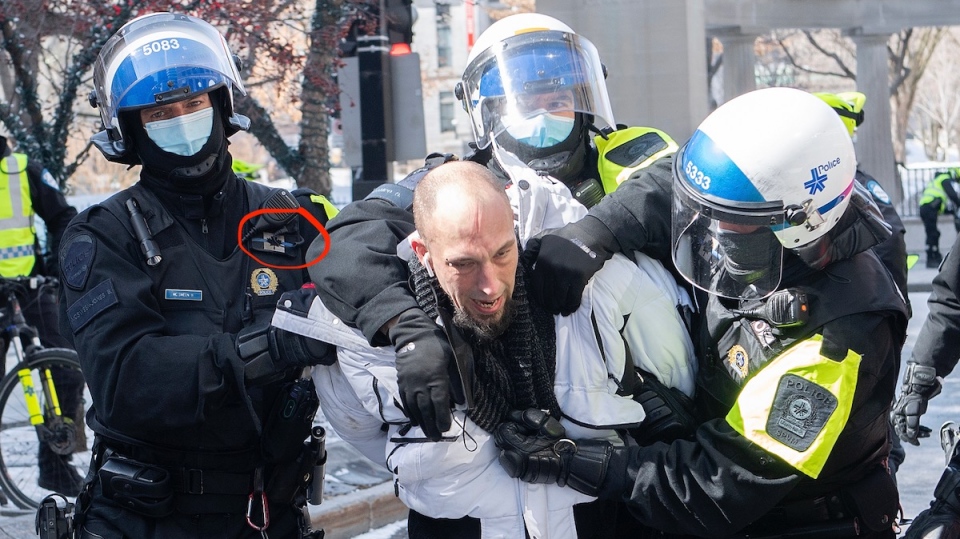 Montreal police officers who responded to a demonstration to oppose government restrictions to curb the spread of Covid-19 in Montreal, Saturday, March 13, 2021, were seen wearing the "thin blue line" patches on their uniforms. THE CANADIAN PRESS/Graham Hughes

On March 13, at least two officers were seen wearing it on their uniform while responding to a protest against public health measures that involved thousands of people in the streets.

Some say it’s problematic to wear the symbol while on duty because of the message it sends and how it has been used in the U.S. among officers accused of police brutality.

"In more recent years, this symbol comes from this notion of police seeing themselves as this barrier between civilized society and chaos," said Sandra Wesley, a member of the Defund the Police Coalition Montreal.

"So in the context now of major mobilization to stop the police from killing people, this is their response to it," she said.

To her, what the blue line says is that they're using "that symbol to show their solidarity with their colleagues who have murdered Black people, including here in Montreal," she said.

The issue of police violence is just as sensitive here as it is in the U.S., Wesley said.

"It's not just an American problem -- it's something that we're seeing here quite a lot. The type of violence that we see in the United States is very common here as well," she said.

"It's a symbol to show that they support each other."

The Ottawa Police Service issued an order to all officers last month banning them from wearing the symbol, as did the RCMP last October with its own officers.

In 2017, several Ottawa police officers banded together to support a colleague accused in the killing of an unarmed Black man by wearing a similar symbol -- black and blue silicone wristbands with the words “united we stand” and “divided we fall.”

Bill 133, passed in 2017 in Quebec, prohibits police officers from modifying their uniforms.

"Every police officer or special constable must, while performing his or her duties, wear the full uniform and wear or carry all the equipment issued by the employer without substituting any other element for them," states Section 263 of the Police Act.

"He or she may not alter them, cover them substantially or in a way that hides a significant element or hinder the use for which they are intended."

Alain Babineau, a former RCMP officer and social justice advocate, said police services should have clear rules around uniforms. However, he said he doesn’t believe the "thin blue line" is inherently offensive.

"People tend to forget that police officers are human beings," he said.

"And when a group that is trying to serve society that has been entrusted by the majority, by society to protect, serve, when they feel that they're being attacked, then they're going to be closing ranks. They’re going to want to show solidarity towards one another and that's just human nature."

He said that in his opinion, the community should focus on the issues at the heart of the problem.

"I want to keep my eyes on the prize, [which is] the battle against racial profiling, right across Canada, from coast to coast, and discrimination within our policing ranks," Babineau said.

"So, that is my focus. And I think that this kind of stuff, with all due respect, is a distraction to things that really matter."