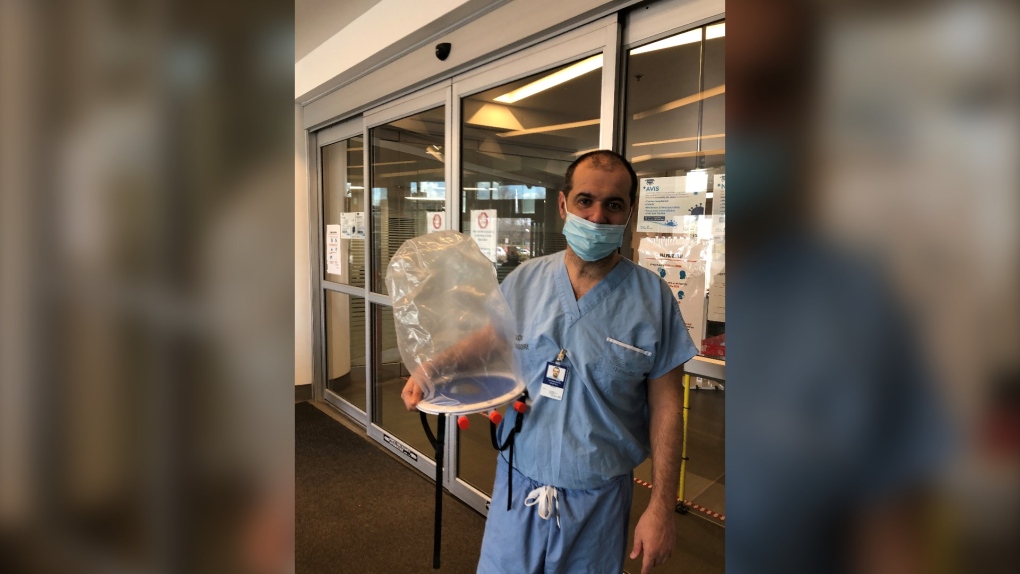 MONTREAL -- After weeks of back-and-forth emails and teleconferencing, a team of volunteer professionals has now produced a working prototype of an oxygen therapy hood that could one day help COVID-19 patients breathe easier.

“Everyone is doing this out of the goodness of their hearts to make sure this critical need is met,” says Thomas Fox, who works at a hyperbaric oxygen treatment centre in Pincourt.

Also in on the accelerated collaboration, are Montreal mechanical engineer Jonathan Theriault as well as the owner of a London, Ontario based medical device company, Juan Rodriguez.

“I believe in sharing information,” Theriault explained, “especially in times like these.”

The three men, who turned out to be well-matched for the enterprise, were strangers only four weeks ago. They were brought together by CTV News after they each saw a story in late March about a medical mission spearheaded by the Director of Anesthesia at the Montreal General Hospital.

All were inspired to volunteer their time and particular skills to the project.

Dr. Francesco Donatelli was searching for help designing and manufacturing a non-invasive oxygen therapy hood, modelled on the helmets used by doctors in Italy, to treat the country’s devastating number of COVID-19 patients.

“This is a good start! We will now test it to see how we can ensure safety and efficiency in the next configuration,” the anesthetist told us a few days after the prototype was hand-delivered to him at the Montreal General Hospital.

“It will be a challenge to familiarize Montreal doctors with the device since we don’t use these kinds of oxygen therapy helmets here,” Donatelli acknowledged. However, he says as word about his project spread, he began hearing from colleagues at Laval University and Halifax, expressing interest.

The device has been the subject of research in the United States. In 2016, scientists at the University of Chicago Medicine led a study on helmet-based ventilation, published in JAMA. A recent article published on the University website March 25 ,reports the data showed “that using these helmets instead of standard face masks that cover the nose and mouth helps critically ill patients breathe better and can prevent them from needing intubation with a ventilator machine. Patients with helmet ventilation also spent less time in the intensive care unit and had better survival.”

WHAT IS A NON-INVASIVE OXYGEN THERAPY HELMET?

The helmet used in Italy’s hospitals is made of lightweight, rigid plastic. It can be used for non-invasive ventilation and CPAP therapy (continuous positive airway pressure). Patients who wear the hood are still able to speak, drink and listen.

Since the respiratory support hoods do not require intubation or a ventilator, they could help preserve Quebec’s supply of sedation drugs and ventilators for the most seriously ill, says Donatelli and, consequently, also help reduce ICU admissions.

The MUHC anesthetist, who trained in Italy as an ICU and resuscitation physician, thinks the helmet design would help prevent the spread of the virus from patients to health-care workers. That’s because unlike standard and widely available CPAP face masks that can leak, the vinyl hood is more likely to contain the infectious aerosol created by the virus.

“It’s not published, but it’s reasonable to think that if you breathe in a closed helmet, you can spread the virus less,” Donatelli says.“

But despite high demand from around the world, the original hood is no longer available. Italy’s government ordered the European manufacturer to halt exportation of the device to preserve the stock for its own population.

That hasn’t deterred Donatelli. The specialist has been working on designing and manufacturing a Canadian version with his newly assembled team since day one.

MEET THE TEAM OF VOLUNTEER INVENTORS

Thomas Fox, who has 30 years of experience in the area of hyberbaric oxygen treatment, was the first to reach out to CTV News. He offered his services and expertise because he makes use of similar plastic hoods at the hyberbaric centre where he works in Pincourt. “What hyberbarics does is treat conditions, or a lack of oxygen - hypoxia, and that’s where it aligns with (serious) COVID-19 symptoms,” Fox explained. “I read the article and said, I have 40 of those hoods right now,” but the technician knew he wouldn’t be able to order any new hoods from his supplier in the United States.

Enter Jonathan Theriault, a mechanical engineer who now works for Dehumidified Air Solutions here in Montreal. “Our operations manager Barry Grimes asked me if we could help, and I thought I could come up with a design.” First, Theriault reverse-engineered the hood sample Thomas Fox sent his way. After receiving some medical specifications from Dr. Donatelli, he embarked on a first design that would require as few custom parts as possible. Raw materials are hard to come by now, and the engineer knew creating custom machinery would be expensive and time-consuming.

Finally, a couple of days later, Dr. Donatelli received the following email that proved to be a critical piece of the puzzle.

“Hello Dr. Donatelli, I saw the CTV report about the use of helmet ventilators for NIV. Have you found a company to help you? We are a private company in London, Ontario. Our main business is the design of medical devices…I have over 30 years of medical device design and manufacturing experience, and perhaps we could be of help.”

“We want to do our part, explained Juan Rodriguez, president of Avicam technologies, “because right now, it’s like a war-zone.” Avicam is also making face shields now. “We have 3-D printers so we are printing them and handing them out to health-care workers.”

Rodriguez and his staff took Jonathan Theriault’s design and “just tweaked it,” and after several on-line meetings, manufactured several working prototypes, that will now be tested and refined.

Donatelli says he's determined to follow through on the project.

In an email sent to CTV News, his colleague Dr. Sergio Cattaneo, a specialist in cardiac surgery, anesthesia and resuscitation at Spedali Civili hospital in Brescia said the oxygen-therapy hood "is absolutely necessary to implement the highest number of invasive and non-invasive ventilation supports in order to save as many people as possible,” particularly those suffering from acute respiratory distress syndrome (ARDS) caused by COVID-19.