MONTREAL -- Campuses may have lain empty for months, but a group of McGill students will be returning to theirs today to ramp up pressure to get rid of the school’s geographical centrepiece.

The Enough is Enough: Take James Down protest Saturday is being organized by the Black Students' Network of McGill, the McGill African Students Society and others and will take place at the Roddick Gates at the university's Sherbrooke St. entrance.

They object to a prominent statue of James McGill, the university’s founder, who owned five enslaved people, including two Indigenous children who died around the age of 10.

Students have raised objections to the statue for years, but especially in the past two months as anti-racism protests have happened around the world. McGill administrators’ lackluster response in recent weeks has only spurred the students, they say.

McGill principal and vice-chancellor Suzanne Fortier released a statement that one of the protest’s organizers slammed as “tone-deaf, self-serving.”

She “failed to acknowledge there was systemic racism in society at large, let alone within the institution that she's principal of,” said Ayo Ogunremi, a vice-president in the McGill student government and also of the Students’ Black Network of McGill.

In one recent petition, students proposed that a tree be planted in its place.

‘THE UNIVERSITY NEEDS TO BE PUSHED’

Ogunremi said Black and Indigenous students at McGill are frustrated in big-picture ways.

“They won’t do the right thing unless their hand is forced,” and this often needs to be done by “the people who are most affected.”

Last year, a young Blackfoot athlete led the charge to change McGill’s team name, fighting the administration for months, only to find himself named valedictorian by his faculty this year.

Last week, a coalition of student groups released an eight-page open letter calling for the statue’s removal and for McGill to “unreservedly acknowledge the slave-owning history of its founder.”

In a statement Friday about the statue, McGill said “there is no plan for its removal.”

The university is taking “a range of steps,” said the statement, including trying to enhance support for Black students and to recruit, hire and retain “underrepresented” faculty.

It will also research McGill’s links with slavery and colonialism, it said, appointing two postdoctoral scholars who will investigate this history so that McGill can “consider how best to acknowledge and engage meaningfully with its past.”

The statement said this move is “made clear on the webpage that hosts a short biography of James McGill.”

That webpage, in the last few days, has gotten a new, short addendum to McGill’s official biography. The biography describes his arrival in Canada, years spent fur-trading and then his rise as a successful merchant in Montreal.

It describes him as a “visionary” and says that “McGill took great care of the welfare of others, including his step-children and the orphan daughter of a friend.”

Now, in much smaller font, against a grey background, there is a box of text at the bottom that addresses his slaveowning.

“James McGill’s legacy made possible the foundation of the University that bears his name,” it reads. “He also owned enslaved people, a fact our University acknowledges and that calls for our greater study and scrutiny.”

It then describes the new postdoc positions and promises to publish more facts about McGill’s early history as these become available.

This year, professor Charmaine Nelson and a group of her students wrote a 96-page study into this history, trying to find biographical details about the five enslaved people. Nelson has long called for the statue to be removed, but she’s not involved in Saturday’s protest. 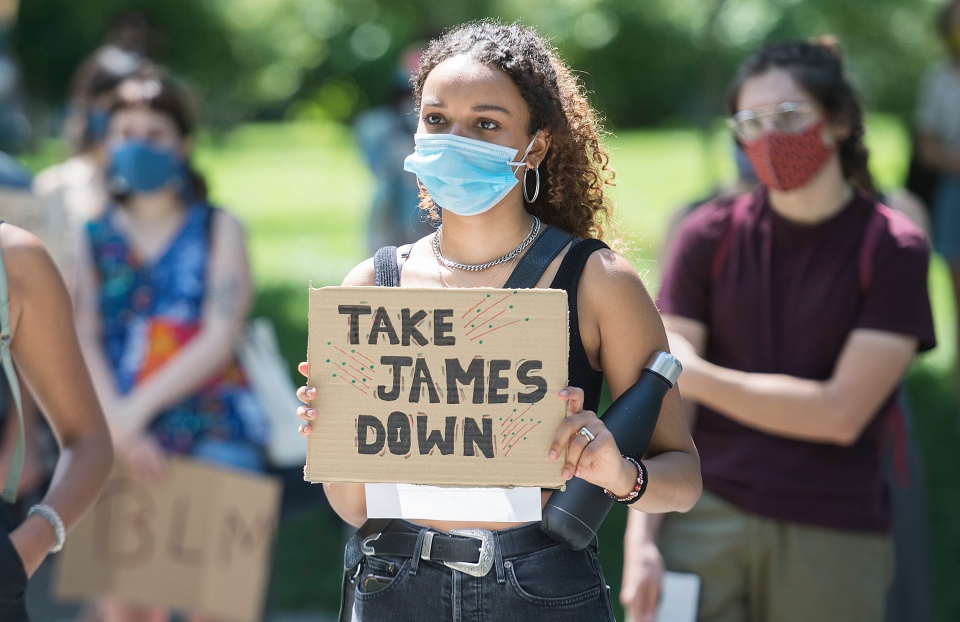