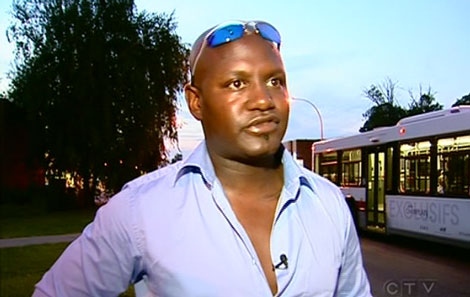 The police ethics commission has reprimanded two Longueuil police officers for discriminating against a man because of his skin colour.

The officers stopped Joel Debellefeuille in 2009 while he was driving his BMW. Despite commiting no driving infraction, officers ran an ID check on his license plate because he was black, and decided to pull him over because they did not think a black man could have a "Quebecois name."

The case went to trial where officers admitted skin colour was the only reason they pulled over Debellefeuille.

They have been suspended without pay for five days.

Debellefeuille, who won the case after several years of legal battles, is happy with the decision, and hopes it will change attitudes so his son does not have to face discrimination.

"I want him to know that his father did something positive with regard to human rights and discrimination and you know you can stand up and be the person you were put on this earth to be," said Debellefeuille.

Fo Niemi of the Centre for Reseach-Action on Race Relations calls this case precedent-setting.

"This case summarizes the state of Quebec and Canadian law on racial profiling, clarifying it , explaining it, and also defining very clear parameters as to how to analyze a situation of racial profiling," said Niemi.

Longueuil Police say the officers did not act in bad faith and in no way intended to harm Debellefeuille.

The force also says most of its officers have since had training in racial profiling issues.