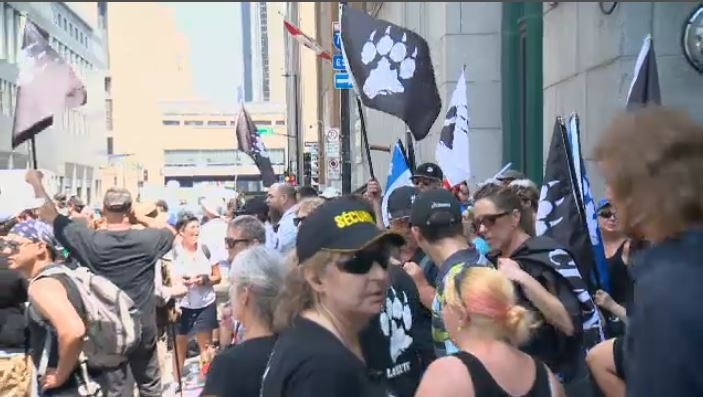 Considering it was La Meute's first major demonstration in over a year, Montreal police said that the demonstrators were somewhat well-composed. However, they did confirm that two arrests were made in connection with the vandalism of La Meute's buses. (CTV Montreal)

Two very different groups used Canada's birthday to demonstrate about immigration - a surge of asylum seekers crossing into Quebec via the Lacholle border.

Nearby, a counter-protest was held in defence of open borders.

Considering it was La Meute's first major demonstration in over a year, Montreal police said that the demonstrators were somewhat well-composed.

However, they did confirm that two arrests were made in connection with the vandalism of La Meute's buses.

The commotion only began with pro-refugee groups arrived at Place du Canada about 30 minutes after the protest began under tight police surveillance.

Even though they kept a safe distance, the counter-protestors responded to wolf cries and chants from the 200 members of La Meute and affiliate groups by hurling their own insults and lifting middle fingers.

The far-Right opponents threw a smoke bomb into a small crowd, according to Montreal police. No one was injured.

The issue at hand - illegal border crossings, has polarized activist groups for over a year.

But La Meute said the national holiday was the ideal time to send a message to Prime Minister Justin Trudeau about asylum claims, and whether they should be valid for people crossing into Quebec from the United States.

However, La Meute says they're not fundamentally against immigration - but would prefer to see a legal, responsible process enforced, they say.

Almost since its inception, La Meute has been plagued by reports that members have ties to extremist groups.

One of its followers had their membership revoked after it was revealed he had taken part in a "Unite the Right" rally in Charlottesville in August.

Reports have recently emerged that a new sister group, called Independence Day, is led by Michel Laroque - the former leader of the Quebec KKK.

Roch adamantly denies that Laroque is a member of their movement.

"[He] is not a member of La Meute. La Meute is one entity," Roch explained. "We accept groups that are not right-wing. That's why we accept the Storm Alliance and Independence Day."

Counter-protestors, however, say La Meute's message is, at its core, a racist one.