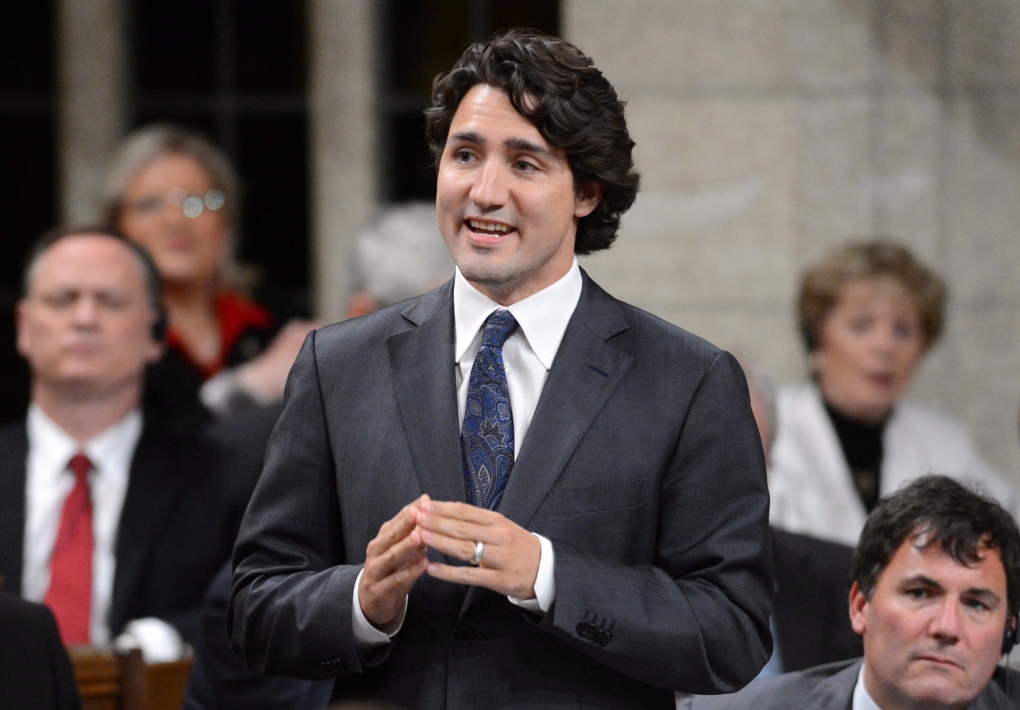 The Liberal leader castigated the idea and said the Parti Quebecois government would damage Quebec's reputation if it proceeded with such a policy.

Trudeau, who happened to be in Quebec City on Wednesday, added the topic to the agenda of a previously scheduled meeting with Premier Pauline Marois.

A media report this week published leaked details of the controversial PQ proposal -- saying it would prohibit people like doctors, teachers and public-daycare workers from donning turbans, kippas, hijabs and visible crucifixes.

After his meeting with Marois, Trudeau said they agreed to disagree. The Liberal leader said the plan was motivated by a defensive "fear of the other" and unworthy of modern Quebec.

"Like we saw with the (recent) soccer turban ban, people laughed at Quebecers," said Trudeau, a Quebec MP.

The Prime Minister's Office, for its part, said: "It's a debate that will occur at the provincial level," while Multiculturalism Minister Jason Kenney tweeted late Wednesday that "freedom of religion is a universal principle." The previous day NDP Leader Tom Mulcair, whose party has nearly five-dozen seats in Quebec, sidestepped the issue by calling the leaked report a "trial balloon."

Trudeau said the purported plan was responding to a non-existent problem and said he couldn't understand which rights the PQ was seeking to protect that weren't already protected in the Canadian or Quebec charters of rights.

He said state institutions should indeed be neutral, like the Quebec government says, but he added that the individuals who work there are entitled to their religion and freedom of expression.

The best remedy to fear of outsiders, he said, is already taking place in Quebec: kids from all over the world are getting to know each other, learning French, playing hockey, and contributing to a Quebecois culture that doesn't negate their roots.

Past polls have suggested such a plan would have strong public support in Quebec. However, news of the impending details has drawn the wrath of several Quebecers.

It even prompted a warning from some religious ethnic minorities working in the province's health-care system: Pass legislation like this, and prepare for longer wait times at the hospital.

Quebec will lose public employees including doctors if the government insists on banning religious symbols in the workplace, said one physician from Montreal's Sikh community.

Dr. Sanjeet Singh Saluja, who wears a turban as part of his faith, said Wednesday that the PQ's controversial "Charter of Quebec Values" would drive people from the Sikh, Jewish and Muslim communities away.

"The sad thing is I don't know if I'd be able to stay here in Quebec," said Saluja, an emergency-room doctor with the McGill University Health Centre.

"Even though I love my practice here in Quebec, my faith is something that's important to me and I don't feel comfortable giving up that part of my persona and I don't think a lot of people would be willing to, either."

Saluja, who was born and raised in Montreal, said this type of legislation could have a significant impact on hospital wait times in Montreal because many resident physicians in the city come from Middle Eastern countries and wear hijabs.

Several Montreal hospitals, he added, rely heavily on residents in many day-to-day functions.

"One of the reasons why we are able to sort of diminish these wait times is because we have these residents who come in and take on patient loads," said Saluja, who believes young doctors would choose other provinces over Quebec if they didn't feel welcome here.

Quebec has been bleeding residents to other provinces for decades, with net losses in migration that have diminished the province's economic and political clout.

Its political weight consisted of 27 per cent of the House of Commons seats in the late 1970s, is 24 per cent today, and will drop to 23 per cent in the next federal election.

"This is not only one group that's being isolated here," Saluja said.

"This is an entire section of the Quebec population (so) it's not going just to be the matter of one doctor, it's going to be a matter of doctors, many doctors, leaving."

A spokeswoman for McGill said training for the Middle Eastern residents is funded by their own governments. She said their Montreal stints usually last from four to six years and the university admits approximately 35-40 trainees per year.

Another Montreal health-care professional warned that if a single person left her department wait times there could grow nearly 50 per cent.

By losing just one staffer, speech-language pathologist Kathy Malas estimated that the wait times would easily grow from 17 months to 25 months.

"It's actually very sad that they're using people's sentiments and this kind of subject, which is very sensitive, as a political tool," said Malas, a born-and-raised Montrealer who wears a Muslim veil.

She said the government should focus its attention on creating programs to teach Quebecers about each other, rather than proposing bans.

In recent days, Malas said she's been asked many times whether she would quit her job or remove her veil if such a policy were eventually passed.

She said she would do neither.

"I would actually fight for my rights to keep my veil and stay at work because I sincerely believe it's a fundamental right," said Malas, who doesn't believe the proposed policy will ever become law.

The PQ minority government, lagging behind in popularity, hopes to win votes by championing a "secularism" plan that polls have suggested has considerable support in the province.

The government says it expects to present the charter this fall -- although it's not clear yet that the plan will get support from opposition parties, which hold a majority of seats in the legislature.

It's also unclear yet whether the plan, even if it proves popular, would sway voters in the next election campaign.

Polls have suggested that while the idea has strong support it's far less of a priority for Quebec voters than other issues, like the economy.

A few hours after Trudeau attacked the PQ plan, Kenney tweeted his own objection: "A child is no less Canadian because she or he wears a kippa, turban, cross, or hijab to school. Kids have always worn religious symbols in Canadian classrooms, w/out jeapardizing (sic) social cohesion. So why is this suddenly a divisive issue?"

Mulcair was more cautious Tuesday when asked about it while in Montreal.

"I'm not going to respond to trial balloons," said Mulcair, adding his party presented a substantive report in 2007 before Quebec's Bouchard-Taylor commission on the accommodation of minorities.

"When there is something concrete on the table, I'll have no hesitation to respond to it."

The Government of Ontario, however, reacted to the PQ proposal Wednesday without any prompting in an issued statement.

"Our government would oppose the introduction of any legislation in Ontario to restrict or prohibit people's freedom of expression and religion in public places," Ontario Immigration Minister Michael Coteau said in the news release with the heading: "Religious Symbols and Coverings in Places that Receive Public Funding."

"Ontario's diversity and freedom of expression and religion is a model to the world -- where we celebrate and respect each other's differences."

The PQ proposal would let culturally specific hospitals -- like Montreal's Jewish General -- seek an exemption, according to the leaked details in a tabloid newspaper.

The same newspaper has interviewed headscarf-wearing daycare workers who say they would quit their jobs if forced to choose between their religious beliefs and their work.

"I left my country and my family behind for a better life here. Now, I get the impression I'm being told to drop everything and go back home," Zakia Maali told the Journal de Montreal.

"There's nothing that will make me remove this. If I lose my job, it'll be unemployment for me, and then welfare. Too bad."

For his part, Saluja said he doesn't believe such a policy would ever pass in Quebec because he has never known it to be a closed-minded place.

"I've never had a Quebecer come up to me and tell that I don't belong here," he said.