Some Jewish McGill students say they are feeling unsafe at the university.

Within an hour of Monday's vote by the Student Society of McGill University to boycott Israel, anti-semitic posts and messages appeared on social media.

A bit more than 800 members of the school's 30,000 students took part in the SSMU vote to support the Boycott, Divestment and Sanction movement against Israel.

Simon Paranski, a law student, said the insults were quick to appear and explicitly anti-Jewish.

"Within an hour of the BDS vote passing, there were posts on social media about Zionist Jew-boys and insulting people of the Jewish faith," said Paranski. 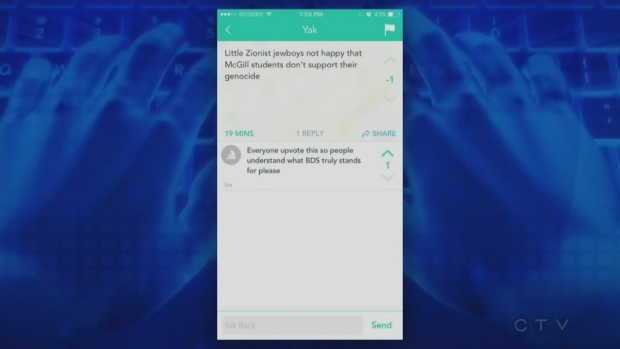 "It was really scary because it happened so quickly, and it was such a huge escalation."

Luciano Del Negro is the vice president of the Centre for Israel and Jewish Affairs, a group that has been in contact with some of the students.

"It is not a resolution on campus which changes absolutely anything and what we feared has come to pass. How is it that Jewish students have been insulted, disparaged, have been made to feel unsafe on campus," he said.

Late Thursday, McGill University issued a statement that said in part: "It is important for a university community to be built on mutually respectful dialogue. Students can report abuse or violations of their student rights to their faculty's disciplinary officer. All complaints are taken seriously and investigated. We have not received any complaints related to this matter so far."

The BDS vote is not yet complete.

Ten per cent of the entire student population must participate in an online ratification process to accept the BDS vote as valid. If not enough people take part, the vote will not have quorum and so will not be valid.