'It's the first time I felt targeted:' Muslim teacher upset by school boards agreeing to comply with Bill 21

Dalila Matoub, a Muslim teacher who wears a head covering and has been teaching in Canada for five years, told CSDM commissioners at a meeting on Wednesday night that instead of taking a break to be in top shape for her kids for the fall term, she spent her break in a depression over the effects the law will have if unopposed. 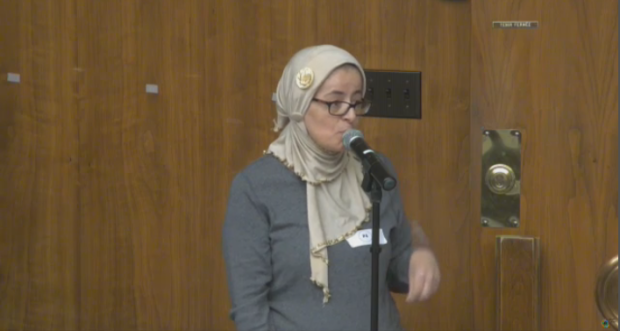 Matoub said a parent had complained that he didn't want his daughter being taught by a woman wearing a headscarf.

"It was the first time I felt targeted," she said. "I've been scared about how returning to school is going to be."

While the school boards said they would be reluctantly following the law, Daniel Baril of the Quebec Secular Movement applauded Bill 21, saying teachers who wear religious symbols could be influencing students and said even the grandfather clause may be a step too far.

"Bill 21 gives citizens the right to have secular services," he said. "Allowing some teachers to wear symbols contradicts the spirit of the law."

On Wednesday, the Quebec government responded to parents who had demanded their kids be pulled from classes taught by teachers wearing religious symbols, saying they would not be allowed to transfer their children. Bill 21 contains a grandfather clause allowing teachers who held their jobs prior to the passage of the bill to continue wearing such symbols.

Both school boards held meetings on Wednesday night. At the EMSB meeting, the board voted against discussing a resolution concerning Bill 21. According to EMSB chair Angela Mancini the board will therefore be applying the law following Labour Day.

“By de facto the English Montreal School Board not making a decision this evening has rendered its decision by default and we will be applying the law come Sept. 3,” she said.

Mancini expressed dissatisfaction, saying she had dissented on the vote.

“We have a resolution on the record that has not been rescinded that says we will not follow the law. Having said that, the council has not reiterated that and our director general has received directors from the ministry that we must apply the law,” said Mancini.

According to Mancini, any teachers who come to class after the long weekend wearing a religious symbol and who aren't subjective Bill 21's grandfather clause could face sanctions.

"Anyone who is new and has been hired by us and shows up to work with headgear or a cross or anything that's a religious symbol, right now the law is such that the administration of the school has to act upon those people, whether it's sending them home or asking them to remove it," she said. "Those kinds of thing that occur when any employee doesn't follow particular rules, we already have certain steps we take as administrators and certainly those will have to be applied."

Mancini said there were still unanswered questions but that they would be discussed in closed door session by the board’s human resources committee.

“Ultimately, I’ve said before, this is an ethical issue and it’s a very serious one for our community because as a community the English community has been very open to diversity,” she said.

Last week the Commission Scolaire de Montreal said it will comply with Bill 21, which bans public employees in positions of authority, including teachers, from wearing religious symbols. The board said in June the law needed to be delayed by a year in order for consultations with schools, parents and others to be held.

The CSDM board met Wednesday night where director general Robert Gendron's explanation about why the board changed course was met with boos from opposing commissioners and teachers in the audience.

Gendron said applying the law was not the same as agreeing to it, and said that opposition to it would continue in other forms such as legal challenges.

Commissioner Violaine Cousineau said at the meeting that they were adamant that they would oppose the bill for a year.