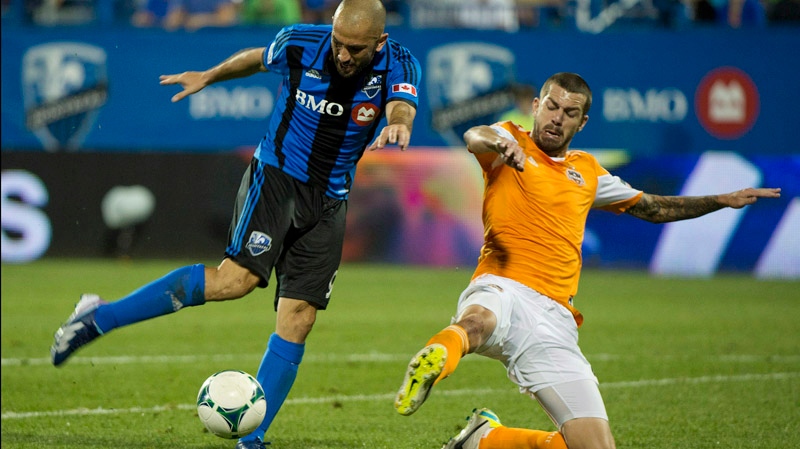 MONTREAL - The first-place Montreal Impact (12-7-6) are back home after another failed quest to score a road victory Saturday, as they returned with a scoreless draw against the Philadelphia Union (10-8-9).

In spite of barely getting a sniff at the twine behind Union keeper Zac MacMath, the Montreal eleven expressed pride in their defensive effort in post-game comments.

The single point allowed the Impact to remain in a first place tie with the New York Red Bulls and Kansas City Sporting atop the Eastern Conference, as all three have 42 points, but the Impact hold two games in hand over both rivals.

“I’m happy that the team got the shutout," said Impact assistant coach Mauro Biello who sat in for coach Marco Schallibaum, who was serving the last of his two game suspension. “We proved that we could play well defensively on the road and we’re happy to come back to Montreal with a point.”

The result wasn’t bad considering that the Union had only lost three games at home all season and the Impact were winless in their previous five on the road, a streak that has now reached six.

The Impact’s only real chance came when Marco Di Vaio put a ball behind the Philadelphia keeper only to have it called back on an offside.

Impact netminder Troy Perkins made four stops in the shutout, his eighth of the season.

“In the five previous road games, our opponents got a lot of chances. Tonight we didn’t give up many scoring tries,” said Perkins. “we were solid defensively and that's a good start.”

The Union’s best scoring chance came in the 42nd minute, off the foot of Sébastien Le Toux who blasted a low drive that Perkins saved. Jack McInerney corralled the rebound but missed the net, part of what the Union website described a dominant effort by the Philadelphia squad.

Perkins also looked impressive in making a solid stop off a McInenery drive in the 57th minute.

The Impact missed a few chances in the first half, including on a set piece hit by Justin Mapp, which was called back on an offside.

“We showed maturity and we were serious on defence,” said Impact defender Hassoun Camara. “We got a few counterattacks but unfortunately none of them ended up in the opposition net, but it’s a point against a solid team.”

The Impact will try to finally score a long-awaited road victory in their next game in New England on September 8.

The New England Revolution are in fifth place with a record of 10-9-7 but have an impressive defence, having only given up 25 goals, and a goal differential of 10, one of the best in the conference.