"Imagine what hell is like": SPCA seizes animals from fur farm

The SPCA is asking the provincial government to step in after finding animals at a fur farm in the Monteregie are living in "horrible" conditions, it alleges.

After getting a complaint about the conditions animals were kept in, the SPCA visited the farm in early May and again on Aug. 4.

The animal welfare organization says that some 10,000 mink and 70 foxes are being kept in deplorable conditions.

"If you can imagine what hell is like that is what these animals are living in," she said. "They are living on floors that are cutting their feet. They have not even enough room to lie out. For the mink, they're sitting on top of each other. Foxes that don't have access to water."

The SPCA asked a veterinarian to come along on their Aug. 4 visit. The report, written by Dr. Sherri Cox, indicates all the foxes were observed to be moderately to severely dehydrated and showed evidence of trauma including broken toes, broken teeth and injuries to their tails.

The mink in one barn also exhibited signs of trauma and had infections.

Cox determined neither group of animals was “receiving adequate care.”

The SPCA seized 16 foxes and several other animals during its August visit, and had to euthanize six foxes and minks.

The agency says the animals that were taken were removed because the owner did not have the proper paperwork filled out.

A spokesperson from the Ministry of Forests, Wildlife and Parks says the government is aware of the situation.

The farm’s owner is now facing fines of up to $5,200 and has been required to make “immediate changes.”

“Since our first visit in July, our inspectors have returned every two to three days, and lately they have gone back almost every day to check on the animals,” said Dr. Guylaine Seguin.

According to the SPCA, the bigger problem is the lack of a rigorous permit system for fur farms in Quebec, especially considering the size of the fur business in this province.

The industry, which produces just over 50,000 pelts a year, is unregulated in Quebec, and fur farms with more than 10 mink or foxes don't need a permit.

The ministry says inspections aren’t required and only occur when there is a complaint.

Alan Herscovici of the Fur Council of Canada says cases of animal abuse on fur farms are rare.

"Canada is known for having the highest quality fur in the world and we achieve that with excellent care so a story like this is totally out of context," he said.

The SPCA says it would like to see the fur industry face tighter regulations, including requiring farmers to obtain a permit and undergo regular inspections.

Laurent Lessard, the Liberal cabinet minister who oversees Forests, Wildlife and Parks, said Friday there is zero tolerance for such situations.

"When the department ... was informed of this situation, which, I repeat, is absolutely unacceptable, protection officers intervened with the goal of stopping the abuse and restoring the situation," Lessard said in a statement. 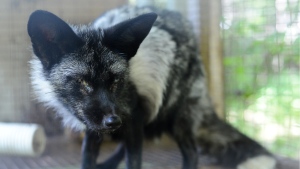 SPCA wants government to step in at Quebec fur farm