Montrealers called on world leaders to move away from fossil fuels during a march to mark International Earth Day on Friday.

A few hundred people gathered in front of Montreal city hall before marching to the Stock Exchange building for speeches.

This year’s Earth Day came about three weeks after the presentation of the latest IPCC report, which warned people have just three years left to curb greenhouse gas emissions and keep global temperatures from rising by 1.5 degrees.

Governments agreed in the 2015 Paris accord to keep global warming well below 2 degrees, and ideally no more than 1.5 degrees, this century. Yet temperatures have already increased by over 1.1 degrees since pre-industrial times.

The report says that increase has already resulted in measurable increases in disasters such as flash floods, extreme heat, more intense hurricanes and longer-burning wildfires, putting human lives in danger and costing governments hundreds of billions of dollars to confront.

When the report was released, its authors wrote that significant changes are needed in the world’s energy sector.

“We are at a crossroads. The decisions we make now can secure a liveable future. We have the tools and know-how required to limit warming,” said IPCC Chair Hoesung Lee in a press release from early April. 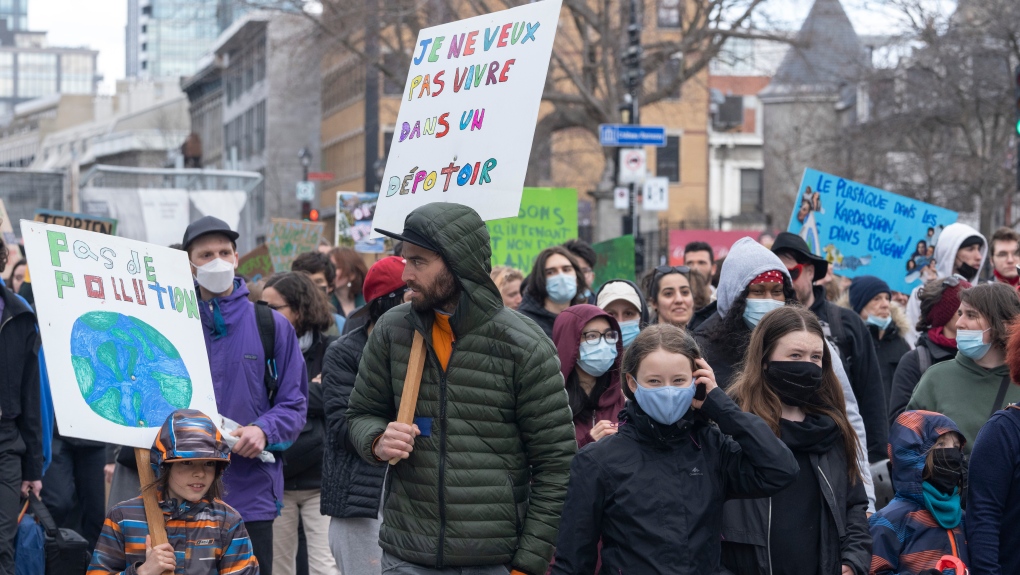 Renewable energy sources such as wind and solar, as well as alternative fuels such as hydrogen, are more accessible than ever.

“Having the right policies, infrastructure and technology in place to enable changes to our lifestyles and behaviour can result in a 40-70 per cent reduction in greenhouse gas emissions by 2050. This offers significant untapped potential,” said IPCC Working Group III Co-Chair Priyadarshi Shukla.

Marchers gathered on Friday around the theme “Let's Heal Together.” Several similar actions were also held elsewhere in Quebec.

-- This report by The Canadian Press was first published in French on April 22, 2021, with files from Luca Caruso-Moro and the Associated Press.