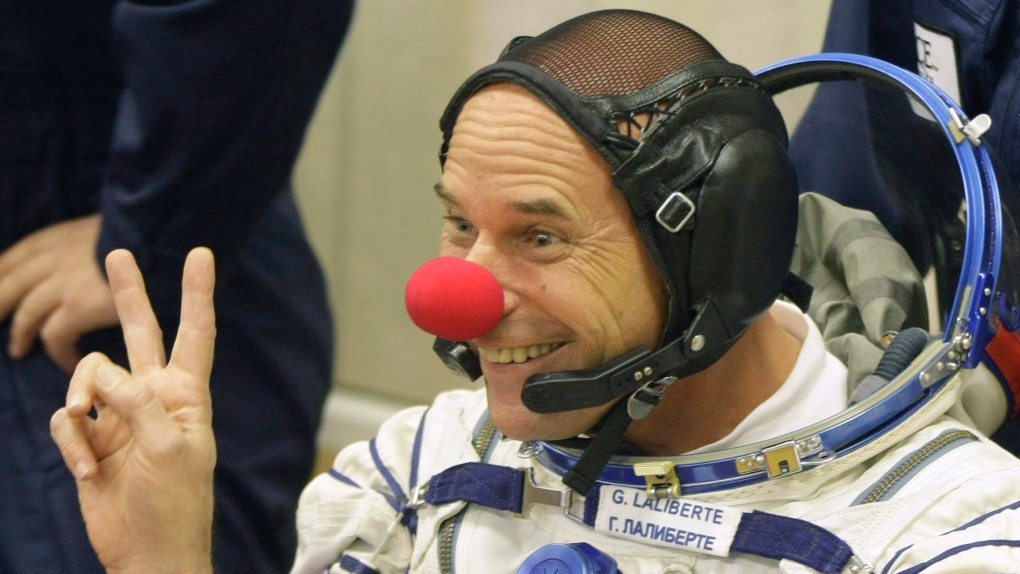 Canadian billionaire entertainer Guy Laliberte, a crew member of the 21st mission to the International Space Station, ISS, gestures while wearing a clown nose prior to the launch of the Soyuz-FG rocket at the Russian leased Baikonur Cosmodrome, in Kazakhstan, Sept. 30, 2009. (AP Photo/Mikhail Metzel)

MONTREAL -- Guy Laliberte will not be able to recover the millions of dollars he paid to the Canadian tax authorities surrounding his trip to space in 2009.

The Quebec billionaire spent 12 days onboard the International Space Station.

The businessman, whose case was just dismissed by the Federal Court of Appeal, said on Monday that he did not intend to turn to the highest court in the country, which put an end to the matter.

In a 26-page decision rendered on Friday, Justice Mary Gleason agreed with the Tax Court of Canada, writing that while the circumstances that paved the way for Laliberte's appeal may seem ‘unusual and exotic’, it’s a different story when the case is considered on its merits.

The co-founder of Cirque du Soleil was trying to avoid paying tax on the $41.8 million bill that accompanied his space trip in 2009 by arguing that these were business expenses and not a personal stay.

However, the Canada Revenue Agency (CRA) challenged this decision and the Tax Court ultimately found that a large portion of the space travel costs were indeed a taxable benefit.

Laliberte was Canada's first space tourist. His journey had been presented as a ‘social and poetic mission’ to raise awareness of the problems linked to the accessibility of water in the world. The Tax Court had set the business portion of the trip at 10 per cent, or $4.2 million, which means that the remaining 90 per cent of the trip ($37.6 million) represented the amount taxable benefit.

Spokeswoman Anne Dongois says Laliberte was "disappointed" by the Federal Court ruling issued Friday, adding that the taxes were paid several years ago.


This report from The Canadian Press was first published on June 1, 2020.