The Villeray-Saint-Michel-Parc-Extension borough in Montreal was active Saturday as protests and counter-protests took place in relation to the 'freedom convoy' in Ottawa.

The group Quebec Pro Choix is among those that organized the "Unis Dans L'Amour Pour La Liberte" (United in Love for Freedom) that drew thousands to Jarry Park in solidarity with the Ottawa trucker convoy, following the Quebec City convoy last weekend.

To counter that protest, No Borders Media and Parc-ex/Villeray inclusifs staged an "Anti-racist mobilization against the far right" demostration at the same park that drew a few hundred people opposed to the above protest and supporters of the 'Freedom Convoy' in Ottawa.

"We are opposed to this convoy because it is a clear front for the far-right," the group wrote. "While some people attending the Freedom Convoy protests are just opposed to vaccine mandates or lockdowns, it’s inexcusable to be expressing those views alongside known far-right actors, including conspiracy theorists promoting debunked and false viewpoints."

No Borders pointed out that members of the anti-immigration nationalist Quebecois group La Meute were spotted at the Quebec City protests. La Meute has posted support for the convoys on its Facebook page. 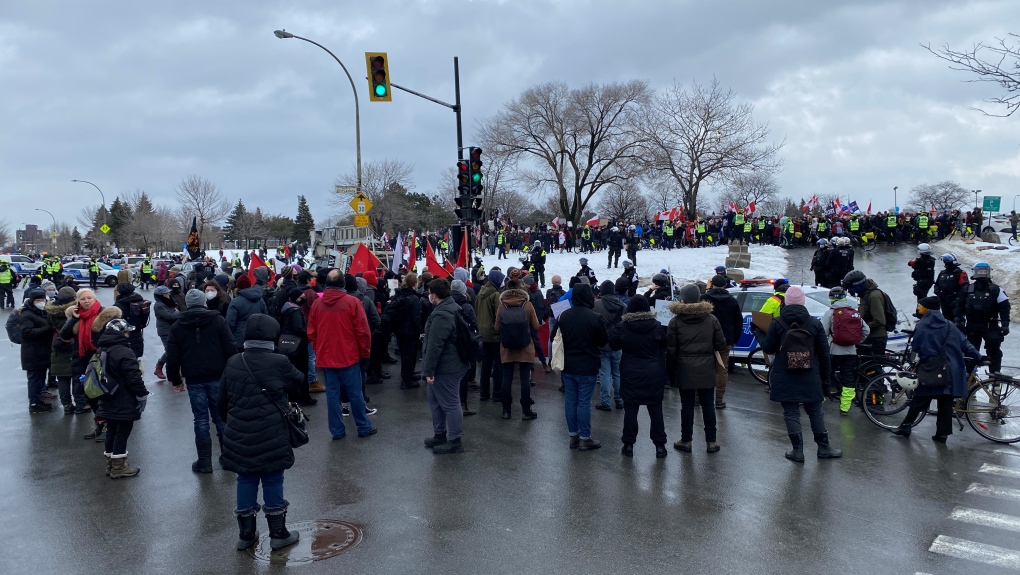 A counter-protest was organized in Montreal's Jarry Park in opposition to the 'freedom convoy' protest in the same area. (Ian Wood/CTV News)

A counter-protest was organized in Montreal's Jarry Park in opposition to the 'freedom convoy' protest in the same area. (Ian Wood/CTV News)

The creator of the Quebec Pro Choix Facebook page Jonathan Sirois-Bouvier encouraged restraint among those attending the protest.

"I ask you please don't answer them or give them importance," he wrote. "Stay peaceful with love and respect please."

Maxime Bernier, leader of the People’s Party of Canada, made an impassioned speech at the event.

“Two doses, three doses -- everyone can get COVID, everyone can transmit it. Yet we continue to segregate and to discriminate here in Canada,” he said, standing before a crowd of cheering demonstrators.

Montreal police (SPVM) spokesperson Veronique Comtois said there were no incidents to report and no tickets were handed out.

The protests were held the day the province relaxed more restrictions related to the pandemic including the number of people permitted at private gatherings, which Quebec recommends at 10. Gyms and spas can reopen Monday at half capacity.

Mayor Valerie Plante said before the protest that the city would not tolerate any roads being blocked, as happened in Ottawa.

"We're still in a state of emergency here in Montreal, so for me, it's very important that people can come and protest peacefully, but I don't want trucks to block streets and the operation that needs to be done," said Plante.

About a dozen semi trucks along with hundreds of cars and pickup trucks loaded with jerry cans full of gas met outside of Montreal at Highway 50 and continued to Ottawa to join the main 'freedom convoy'.